21 Desiree
Intriguing?
This perfectly nice house has sat unwanted since May 2005. Priced as high as (here’s a case where raising the price definitely did not help) $5.950, it was lowered today to $4.995. That might do it, but I wish the owner had picked that price originally.

Utube on the housing bust
Greenwich Roundup readers might benefit from watching it.

My pal Brian over at Greenwich Roundup shore can’t spell but he is nice enough to link to this blog from time to time; I wish he’d read it, too. If he did, he wouldn’t post things like this:

Earlier this year when it was reported that 4,000 Coneticut families had lost their homes to forclusure the heartless Wall Street Big Shots said it was thier own fault. They should have been smarter they had no business getting a subprime loan in an attept to experience the American dream of owning a home.
There wasn’t a damn dime available to these famlies who needed to learn to pick their selves up by ther bootstraps and go find a new place to rent….

But those who are primarily to blame are walking among ushere in Greenwich , smug, unrepentant, still rich.
Maybe some government agency will grow some balls and manage to indict these bums for racketeering.
It is time to seize those bonuses and put them in a fund to help home owners that are in foreclosure..

Brian, last Thursday I provided a link to and quoted extensively from a 1999 New York Times article that showed Dodd and his partners in crime, Bill Clinton and Barney Frank,forcing Fannie Mae to increase its mortgage portfolio’s holdings of sub-prime, non-verified loans to 50%. This was supposed to increase minority homeownership. Instead it set in motion today’s train wreck and I, at least, find those politician’s present wailing and gnashing of teeth both hypocritical and a bit angry-making. Your poor foreclosees knew they were engaging in fraud, knew they couldn’t afford what they were “buying” – if no money down can be considered buying – and were counting on an ever-rising market to make things right. Sometimes, life doesn’t turn out the way we hope.
I’m not impressed by Wall Street’s acumen in this matter but I’d look a lot further back than the inauguration of George Bush for the root causes of our troubles.

Can you hang on for a few years? I promise I’ll get back to you.
98% of commercial real estate professionals are bearish on the market and most, 62% don’t see the market stabilizing before 2010 – another 22% see 2011 as the magic year.

The majority of real estate executives — 60 percent — say the current credit crisis is the event with the single-greatest impact on the commercial real estate industry during the past 20 years, according to a national survey conducted by law firm DLA Piper.

The survey measures attitudes and perspectives of 424 top executives within the commercial real estate industry.

The majority of all respondents — 62 percent — don’t expect the real estate markets to stabilize until 2010, and 22 percent don’t expect to see stabilization until 2011.

About 51 percent of all respondents expect foreign investors to be the most active in the United States during the next year. Ninety percent describe themselves as bearish, up sharply from 68 percent in last October’s survey.

Eight out of 10 respondents do not believe that the recent developments concerning Lehman Brothers, AIG and Merrill Lynch signal the “bottom” of the cycle, nor do respondents think they provide the “first sign of light” at the end of the credit crisis tunnel.

Those views are for commercial, not residential real estate, but I’d guess you’d find a lot of residential brokers who agree with the sentiments. Of course, residential agents are handed rose-colored glasses at birth so there may be more optimism in the residential field.

James Lileks as usual, posts a pretty good summary of the current mess in Washington and Wall Street:

I’m of two minds on the bailout – reasonable people object, but on the other hand, let’s not just wreck everything today because we want to stand on principles, okay? I don’t mind people standing on principles except when they’re also standing on my throat, and if it’s a choice between Liquidity with Troubling Implications and A Firm Stance On Sound Ideas that Incidentally Throws Everyone Into Super-Harsh Bankruptcy A-Go-Go, well, I cave. I’d also like to see the Congress manage to pass something without yoking a hundred dead-eyed hobby-horses to the bill, too; when I learned that Sen. Reid wanted to attach an amendment that extended the ban on shale oil exploration and drilling, almost 16% of my brain liquefied and shot out my ears.

25 Birchwood
If at first you don’t succeed…
This house has finally gone to contract, price unspecified. It came on last year at $4.188 million and then yo-yo’d (yoyoed? I have no idea how do spell yo yo in the past tense) through 12 price “adjustments”, dropping down to $3.950, up to $4.175, then $4.2, down as low as $3.65 (in a couple of steps) and finally coming to rest at $3.995. So perhaps it’s an example of raising the price actually working to sell a house, or perhaps the buyer ignored the asking price and bid what he wanted. I’ll let you know after the sales price is reported.

Okay, we can call off the financial crisis
7 Dwight Lane did find someone willing to meet the minimum bid of $2.5 million. This wasn’t exactly what the IRS representative told me and a few other amused skeptics last month, when he insisted that his “biggest problem was only having one of these to sell” and assuring us that he had bidders lined up the door, ready to buy this dreadful property for far more than the minimum but a buyer was found among the 20-30 people who showed up to laugh.
The buyer was an elderly gentleman from, I think, out of town (ED – do non-Greenwich residents look different from us? Why, yes, I believe they do – besides, no one from Greenwich would think this place was worth what they bought it for). He and his 3rd (?) wife, who probably sprung him from the asylum just for the day, succumbed to the rep’s rather unoriginal mantra of “Greenwich, Greenwich, Greenwich, location, location, location” and parted with their money – there’s a picture of that act above.
Regardless, it did sell and out governmental coffers are now full. Let’s all relax and enjoy the weekend.
Update
Greenwich Time reports that the befuddled buyer was a 68-year-old retiree from Scottsdale, Arizona (I told you he didn’t look like he was from Greenwich – take that, Editor!). No pictures yet but Bob Luckey, GT photographer and one of the best in town, was on site so check the paper tomorrow. I snapped some shots with my trusty iPhone and will post a few as soon as I can abandon this worthless office Window machine and get home to my Mac.

Realogy and its credit woes
According to The New York Times,

Dozens of other companies are being closely watched for signs of trouble, according to Mr. Penniman. Among those he cited whose debt showed distress were Sbarro, the Italian fast-food chain; Dollar Thrifty Automotive Group, the rental-car company; and Sealy, the mattress maker whose predecessor helped lead to the fall of First Boston.

What will probably happen to Realogy is that, once the money managers of Apollo Management grow tired of losing, not making money on their real estate venture they’ll unload Realogy and with it its branches like Sotheby’s and Coldwell on someone else. Those firms themselves will stick around – why, they’re as solid as Washington Mutual!

Mr. Sanity to the rescue?
Picking up on my brother Gideon’s observation that there are plenty of buyers out there but their offers are being rejected as “crazy” by sellers, I suggest to sellers that the market is, with the exception of Wall Street, usually not crazy. If you’re receiving offers that are way below what you’d hoped to get for your house, it may be time to either pull the property off and hope for better times or to get real: you’re receiving a message – tune it in. 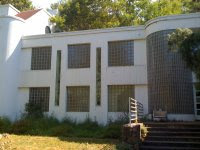 7 Dwight Lane
One story that GT has posted today (a month after this blog reported on it, with pictures) is the IRS auction to be held at noon up on Dwight Lane. The auctioneer claims it will sell way beyond its asking price of $2.5 million – I say it won’t. I’ll be there this afternoon and will let you know what happens, and who was right.

“Hey, where’re ya goin’?”
Police officer of the month
Another story that Greenwich Time refuses to share with its on line readers is the announcement of a patrolman’s selection as “officer of the month”, a distinction earned by his alert response to and prevention of a burglary at 1 Stallion Trails (if you’re in the market for house in Greenwich, by the way, either avoid houses that are right by a Merritt exit or invest in a great alarm system – our burglary friends from outside the local area like the “EZ-off, EZ-on” aspects of such locations). The cop did a fine job and hats off to him but I liked the part that said the police “noticed that the man was wearing an ankle bracelet”. What kind of dummy goes on a house job wearing a probation department – installed ankle bracelet? I once complained to a colleague as we exited Stamford’s criminal court that our clients were eff’in idiots and he responded, “if they weren’t, we’d be out of a job”. Touche.

45 Upland Drive
Why I don’t bother with Greenwich Time’s real estate reporting
In today’s edition of our local paper Susan Nova writes about “a magnificent mansion” that’s for sale on Upland Drive (no link, because the paper hasn’t put Nova’s column on line today). While the “reporter” accurately recites the house’s many charms, and there are many, I’m sure,I’d think that readers would be interested to know the (non) sales history of this spec home. If I’m right, and you’re one of those readers, here goes:
The house was finished and went on the market in January, 2007, for $9.250 million. The first broker couldn’t sell it so the builder listed it with another, who dropped the price to $8.650 million, and there it sits. I admire the second broker’s marketing skill in persuading Nova to highlight this house but I suspect, and I’m sure I’m wrong, that price, not lack of publicity, is what’s keeping this property around.
Just as an aside, when I went on line to search for this house I just punched in some price parameters: $8 – $ 12 million. There are 41 houses for sale in that price range. Barring an extraordinary turnaround on Wall Street today, I’d bet that the majority of those will still be available next Monday.