then here’s a link back, to Peter Applebome’s article on Greenwich real estate in Sunday’s New York Times.

A determination to fail?

This article from the December 16, 2007’s New York Times describes the teardown craze that swept the area the past few years and, interestingly enough, profiles Mr. Dominick DeVito, then just four short months away from being indicted for bank fraud. Devito purchased 2 acres in a 4-acre zone at 23 Bedford Road for, if Zillow can be believed, the astonishing sum of $2.975 million on July 17, 2006. He just might have been that dumb, given his expectations. According to the Times:

Mr. DeVito has nearly finished building an 8,800-square-foot replacement house on the site. It has five bedrooms, five full baths, two half baths and a four-car garage. Mr. DeVito plans to put it on the market in late December for $5.9 million, and he expects to sell it within 30 days.

I won’t say that a house at the lower end of Bedford Rd, cheek-by-jowl with Westchester Airport will never sell for $6.0 million, but this one didn’t. Nothing happened, in fact, between the time it was listed at the promised $5.995 million in January of this year and August, when it was reported as rented for $19,000 per month. My rudimentary calculations show that $19,000 will come just short of covering interest at 6% on a $3.0 million loan, before property taxes etc. So not a home run, especially if he paid as much for the land as Zillow says he did.

What’s also of interest in the article is the enthusiasm expressed by those interviewed about the prospects for the coming year. Here’s one now:

Caroline Shepherd, an associate broker at Houlihan Lawrence, finds much the same situation in Bedford. “Teardowns have enormous potential,” she said, “and people are standing in line for good land with endless possibilities.” The local real estate market has been “surprisingly good,” she added, and nearly a third of her business this year has included some kind of teardown or rebuild.

It’s true that the market didn’t really start falling off the cliff until May of this year but the signs of a slowdown were certainly abundant and, while builders were still committing to projects in late 2007, I’m not sure wise ones were so wildly positive as the people quoted here.

The prospect of disaster probably didn’t matter to Mr. DeVito: his business plan seemed to be based on stealing other people’s money rather than earning his own, but for legitimate builders, trouble was just over the horizon, and I guess many didn’t know it. So this article is a bit like a snapshot of the Titanic as she left Southampton. Bon voyage!

Comments Off on A determination to fail?

What, Florida has no tasers?

Comments Off on What, Florida has no tasers?

It says here that in Greenwich, state leader in teardowns last year with 214, is seeing 35% fewer this year. I’ll bet that number drops much further next year – few builders I know are brave, or rash enough to start a new project in this environment. Even the normal incentive to start during a slowdown, being ahead of the pack when the market does return, doesn’t seem like much of a spur when there is so much inventory to dispose of.

One note: the author of the Times article accompanying the one I link to above seems rather smug about her decision not to sell her Cape to a builder. If the market doesn’t return and no one will pay her a price anywhere close to what she might have received two years ago she may still feel proud of her integrity but perhaps not so smug.

Comments Off on Teardowns down

If it were in my power, I’d bar him from my country too

Comments Off on If it were in my power, I’d bar him from my country too

I stopped by 36 Edgewood Drive to check on progress. Although its foundation was approved in July 2006 it has still not come on the market and as you’ll see from the photo, no one’s mowed the lawn in awhile. Nonetheless, there is some activity going on today, Saturday afternoon. There were a few lights on and a solitary painter was working inside. Does he work for the builder or a bank? Is this place really finally going to be completed? It would appear that it is, though completed by whom, coming on the market when and and what price are all mysteries. 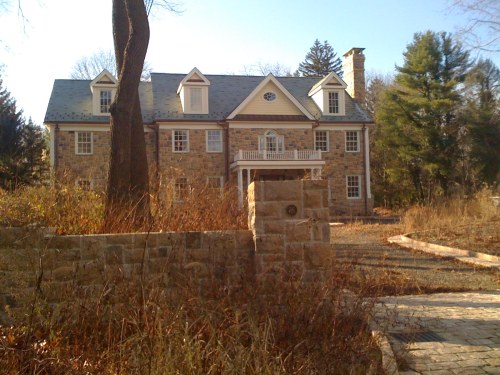 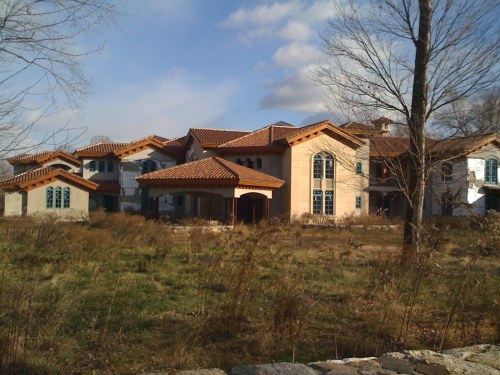 This must really cheese Regis as he drives by each morning!

The Licata mansion on Meeting House Road, on the other hand, is definitely abandoned. It’s huge – 15,000 sq.ft.? More? And really kind of cool inside, but there’s nothing much there except framing and some southwestern kiva fireplaces. It would cost a fortune to finish and it’s been abandoned so long I doubt there’s any choice but to tear it down and start over. A pity and a waste.

And then there’s 19 Licata Terrace another soon-to-be abandoned project by Mr. Licata. The picture’s below – a not-so-nice house on an existing foundation (the second photo shows rusting lolly columns holding up the entire rear side) on what I would describe as a street of modest homes – you might be harsher. Here’s a question: this house is burdened with a $1.750 million mortgage, plus various sub contractors’ mechanic liens, plus delinquent property taxes and it will take, by the builder’s own estimate (which should be taken with a grain of salt), another $180,000 to complete. Why was so much money extended on this project, on this street, to this builder? Licata is fresh from pleading guilty to a $19 million bank fraud loan, he couldn’t have walked away from that Meeting House Road fiasco smelling pretty and his local reputation is … challenged.

I think this last house illustrates what went wrong with mortgage lending in this country. Twenty years ago, mortgages were extended by and held by local banks. The bankers knew the players and knew who not to lend to. They knew the streets, they had a good idea of the value each street could support and they were lending their own money. I don’t believe either this Licata Terrace house or Dom DeVito’s scam on Round Hill Road would ever have been funded in 1988. But banks no longer loan their own money and they no longer have a Lloyd Fideo, as Putnam Trust did, to scratch his head and opine, “I just don’t think that fella’s a good risk.” These bombs were financed nationally, spun into slices and sold internationally and no one, anywhere, cared about getting paid back so long as they could pass that risk on to someone else. Now that they can’t do that, now that the loans are coming back, they suddenly care. It’s too late and we’re going to pay a terrible price for that negligence. 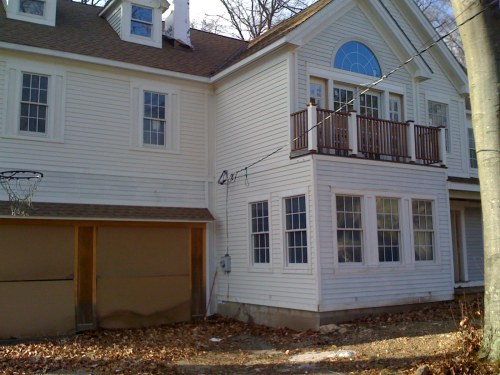 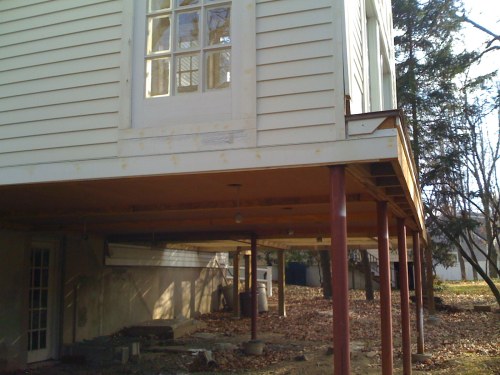 Is this really an approved construction technique?

Earlier this week, when a commentator took me to task for my dislike of seat belt laws and my obvious disregard for social responsibility, I suggested facetiously that when I was permitted to seize cookies from fat people’s shopping cart I’d let the state tell me how to be safe in my own car (I wear a seat belt out of habit and have done so since I began driving so we’re talking principle here, not my own stupidity – I display the latter quality in other endeavors).

Anyway, what I thought was facetiousness was actually prescience – England’s starting charging parents of fat kids with child abuse. Are we far behind?

Here’s what we’re in for

How about eliminating secret union elections so we can sic the UAW on Honda and Toyota and make them as sick as the (former) Big Three? The Democrats think that’s a grand idea and guess what? They’ll be running the country in two months.

A UAW ally, Rep. Tim Ryan, D- Ohio, said enactment of the Employee Free Choice Act “would level the playing field. Each facility would be competing on the same playing field.

Some politicians aren’t so sure of the merits of this curse of action:

If the “card check” bill became law, then “I suppose they could share the misery and everybody could be stuck with $70 an hour labor costs,” said Sen. Jon Kyl, R-Ariz., sardonically.

Unfortunately, you’ll note that Senator Kyl is a Republican and hence, irrelevant. Politics for a change!

Comments Off on Here’s what we’re in for

Take that, you miserable pest

You know how annoyed you get when some HSA guard at the airport confiscates your 3.5 oz. of toothpaste? Well you can’t strangle that moron (with impunity, anyway) but how’d you like to get your hands around the throat of the mad mullah who set that regulation going by trying to blow up a dozen airplanes leaving London? As of yesterday, you can’t do that either, because one of our Predators blew him up. That’s a trade off I’ll take gladly.

Comments Off on Take that, you miserable pest

Old folks having trouble selling their homes, have to stay put rather than move into nursing homes. An un -looked for boon or a bummer? Having visited nursing homes, I’d say the former but then, I’m not 94.

Comments Off on Help! I’ve fallen and can’t sell my house!

Reader Tom Abbott sends the following link from the WSJ: Rich cut back on allowances to mistresses. There is some good news: there seems to be a gender gap in this, as in most matters, and women are keeping their lovers’ payments steady. Given the state of the real estate business, I may be in the wrong line of work.

Comments Off on Still another sad tale