Why not a shrine?

Kennedy compound in Hyannis to be converted to museum. “No one in the family wants to live here anymore,” said recovering drug addict, bar-exam flunkee and ecologist panderer Joseph Kennedy. “I mean, Uncle Teddy and me did our damndest to stop those friggin’ windmills in Nantucket Sound but it looks like they’re going up anyway. Once they do, there goes the view. So screw this, we’re all moving to Blue Hill.”

I have no idea what the hell it is, but I caught it!

This bad. The photo here is supplied by the Post’s “fishing expert” to illustrate an article about an upcoming bluefish tournament. To this eye, the fish appears to be a weakfish, and very much not a bluefish. Hey, it’s got scales, eyes and a tail and he caught it on a hook so a fish’s a fish, right? Good lord.

It’s worth clicking onto the paper’s online site just to see how awful a paper can get when it fires the only computer-savvy person on staff – in this case, custodian Lanny Davis, who must have pissed off an advertiser or something. The Post has never had “perma-links” meaning no one else could link to their articles, but they’ve now abandoned all format and have substituted a bizarre collection of clickable items that may or may not lead you to a story. I’d accuse some hacker of sabotaging the site but I’m pretty sure this is owner/publisher Marty Hersam’s doing. Why he’s doing it beats me – ask Marty. But quickly, because this puppy’s not long for the world.

Blumenthal’s got the UBS list of tax cheats and he’s checking it once, he’s checking it twice, to see which Connecticut (non) taxpayers have been naughty or nice. Although I always worry about the Noels and their difficulties, on reflection, this news probably won’t affect them. Switzerland as a tax haven? When you’ve got Andres tooling around the seven seas in his 180′ super yacht? How naive. I’ll be hugely disappointed if Walt turns out to have entrusted his secrets to some UBS flunky when he has had a Colombian-trained money launderer right in the family with the know-how and the means to dispose of little secrets far more discretely.

Walt’s neighbor Ric Burke, on the other hand, does sound dumb enough to have wandered down to Stamford with a cash-stuffed briefcase and told them, “put this where no one will ever, ever find it.”

I await developments with bated breath.

I don't know where she is - I dropped her home

The Democrats, wailing from behind their crocodile tears, vow to ram ObamaCare through Congress under the guise of a tribute to the late senator from Massachusetts. I’m all for it. This vile man did far too much harm to our country to be remembered merely as the cowardly, drunken sot who let Mary Jo Kopechne drown. Ruining our health care system? Now that’s something big enough to encompass this fat fraud’s accomplishments. Go for it, guys.

And guess what? An $8,000 buyers credit isn’t even a rounding error in our market

Here’s a cheery chart. Especially in Greenwich, where we have almost no new houses selling but plenty of foreclosures brewing.

A rough beast slouches towards Greenwich

I’m not familiar with the last three, offhand, but the others are not worth what’s owed on them (in my opinion). Short sales/foreclosure auctions, coming up, eventually. 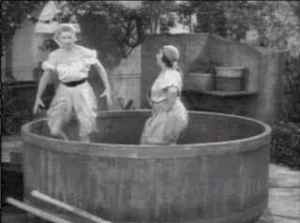 My suggestion yesterday that French people don’t bathe drew an irate complaint from a charming, beautiful Frenchwoman of my acquaintance who insisted that her countrymen do wash, at least occasionally.  And I’m sure they do – what with failing to gain a victory since the conclusion of the Thirty Years War in 1648 and forced to run away ever since from every foreign army to invade their land  they must have worked up quite a sweat by now and even the finest perfume must, after awhile, surrender to that kind of odor.

So of course, I repent and I’m truly sorry. My ancestors would apologize too, but most of them were slaughtered by their fellow Frenchmen during the St. Bartholomew Day Massacre of 1572.. But all is forgiven – even Huguenots don’t hold grudges beyond 500 years, so we’re all friends again, as of 1972.

There’s a butt for every seat

Francine Drive, a tear-down, is under contract somewhere below its asking price of $950,000.

So there are buyers out there – all you have to do is price your house low enough to attract them.

Reader Fly Angler has been predicting for awhile now that Wall Street will make a come back and bonuses will soon find their way back into the crocodile-skin wallets of our most beloved clients and I understand his hope: he passes these predictions on when we meet at the bank of the Rippowam River where Fly, his camping equipment and his fishing tackle, together with a stolen shopping cart to keep them in, are temporarily living.

But he may be right. Last night around his campfire he gave me this tip from The New York Times: hedge funds in England and, presumably, the US are hiring again. That’s good news, as is news, passed along by Pal Nancy, that friends of hers who were laid off the past year are finding work again. But before we celebrate by raising our prices back to 2007 levels, we might pause to consider that our housing inventory remains bloated: the 7 1/2 month inventory of new housing, nationwide, that got traders so excited yesterday is still 2 1/2 – 4 1/2 years, depending on price, here in our fair town.

And then there’s this: the people being hired are the cream of the crop: the dullards (like my acquaintance who spent eight years trading convertible bonds without ever learning what they were) are no longer going to be able to make enough down in the canyons to afford a house here.

The jobs market is still slacker than before the credit crisis levels and hedge fund executive payis also lower, but many of the most talented managers have now been recruited again, Alpha Search’s Olman said.

“A lot of highly talented people, who were dislocated by the downturn in the banks, have been picked up,” he said.

“It’s a little bit harder to get quality people than the first quarter. There’s no fall in the number of unsolicited resumes… but the quality has dropped.”

We all like to think we’re way above average but as I’ve grown older my ego has been battered enough to understand (in those few, rare moments of self-honesty) that God may have other plans for me than to put me in charge of the world and I will say that many of the people I know in town who are, or were, “in finance”, would, in a fairer world, still be cutting down trees for a living or serving as copywriters at a mid-level advertising agency. I don’t think their intellectual heirs will be moving into Greenwich soon.

Tagged as New jobs in finance?

Our Republican governor has thrown in the towel and given the Democrats what they wanted: higher income taxes. I suppose we should admire a politician who would end her career doing what she perceives to be the right thing but I can’t admire actions so wrong. By caving, Rell has just cut herself off from the sustaining life blood of Connecticut Republican politics: money from Fairfield County. She can hold all the bake sales she wants to in Enfield – she is now a lame duck. Scott Frantz, anyone?

Tagged as Jodi Rell and the income tax