This explains the poll numbers below: stupidity and economic ignorance

Bloomberg poll: Americans want government to “create” jobs by public works spending and job training, cut the deficit, and have “the rich” pay for it all. Only a public this ignorant could have elected Obama or wish Bush the spender back in Washington. Fear for our country.

POLL: 44% OF AMERICANS WOULD LIKE BUSH BACK AS PRESIDENT. “You miss him now that he’s gone, huh, America? You kicked him when you had him, and now…” Heh. Have you noticed that most presidents look better once they’re gone? 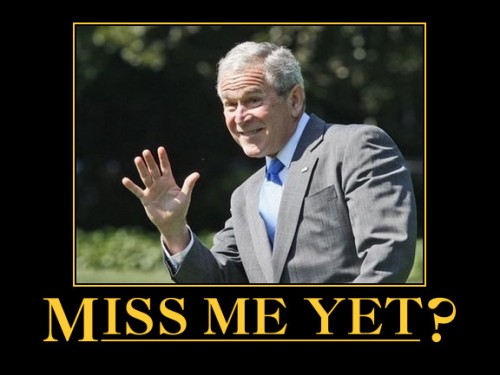 This is a very pretty house in Glenville that was purchased new in 2000 for $1.7 million. Nothing was done to it since then so I was a little surprised to see it come on the market last year asking $3.595 and so, I guess, were potential buyers, because they shied away and it’s now undergone a series of price cuts. Today’s brings it down to $2.995. The assessment is $1.9 million, so there’s some serious disagreement here between the assessor and the seller. Who will be proved right? Wait and we’ll see.

I’d thought we were done with spec houses

But here’s another one, just listed today at 8 Alpine Road (off North Street). $12,750,000 for 11,000 square feet, some of it underground. That’s a higher price than spec houses have been selling for these days but maybe this builder sees  one of those big Hawaiian waves that were in the news last week, and wants to be out there on its crest.

Per Teri Buhl. I don’t know these guys (principal is a David Bryson?) but the odds are pretty good that at least one of them must live on Round ’em Up Hill, don’t you think?

Bloomberg reports that they are talking. That’s good news locally because we have at least a couple of Greenwich guys over there who had nothing to do with Raj’s insider trading yet were badly affected when Galleon shut down. So I hope they work things out.

Comments Off on Galleon Asia joining with Fortress?

Ambulance crew drops fatso off stretcher, killing him. Hey, if they never make it to the hospital, you save big. Okay with me.

Better I have no cow than my neighbor have two

That’s an old Russian proverb that nicely summarizes the current populist mood sweeping the globe. I don’t care if Bolivia goes further into the communist camp but Hartford is gearing up to do that in Connecticut and Fairfield County will be the sacrificial victim.

The state Capitol complex was filled with hundreds of people Wednesday who were protesting various budget cuts that are being offered to fill the state’s projected deficit of nearly $500 million.

But Ron Cretaro, the executive director of the Hartford-based Connecticut Association of Nonprofits, says much of the problem could be resolved in another way – by raising taxes.

“We’ve got to do revenues,” Cretaro told Capitol Watch. “The one-time revenue fixes are going to be gone.”

“We did a step, but it could be made even more progressive,” he said.

“Right now, we’ve got more people coming to our doors,” Cretaro said, referring to services offered by the nonprofits. “People who used to donate are now applying – and coming to food pantries and facing foreclosures.”

Rell has called the legislature into special session on Tuesday, but many insiders believe that no budget cuts will be approved during the pre-Christmas season. Instead, the legislature might come back in late January to analyze the budget once again.

Spokesmen for the Democratic leaders say that no final decisions on the budget proposals is expected until after Democratic caucuses in the coming days.

Cafero said the legislature cannot do what it did in the last fiscal year – wait until the end of the year and then borrow money to cover the deficit.

“We can’t borrow any more,” Cafero said in an interview Wednesday. “We’re up against the bonding cap.”

The Democrats aren’t going to cut spending and they’ve used up their financial gimmicks in balancing – sort of – this year’s budget. They’ll come after “the rich”, knowing that they’ll pay no political price for that and will actually feed and satisfy the mob’s anger. They are counting on inertia to keep their cash cows here, just as Britain’s figuring that no banker will uproot his family and move abroad if they take half his salary for a year. And I imagine they’re right, for now, but these taxes aren’t temporary and, as they mount, as spending increases each year, the people footing the bill will start wondering why they are doing so.

What will happen to all the hard working blue collar Democrat voters who have been making such good livings building houses for the rich and servicing their needs? They’ll go broke, but that’s okay, so long as their neighbor’s cow pen is as empty as theirs.

Two classes of investors, two views of the future

While the stock market is soaring, bond buyers are looking at what’s ahead and balking. The result? Treasuries are tanking.

The so-called yield curve touched 368 basis points, one basis point below the 369 level it reached in 1992, with the Federal Reserve’s target rate anchored at a record-low range of zero to 0.25 percent and the Treasury extending the average maturity of government debt being sold. The shift to longer- maturity debt has raised concern that investors will demand higher yields to offset the risk of inflation as government spending drives the deficit to a record $1.4 trillion.

“The curve reflects the Fed taking short term rates as low as it can go and the Treasury piling on out the curve,” said Ward McCarthy, chief financial economist at Jefferies & Co. Inc. in New York. The firm is one of 18 primary dealers required to bid at Treasury auctions. “While there is a strong overseas underwriting bid for 5s, 7s and 10s, the bond overwhelmingly is a domestic issue. The slope of the curve reflects the concession necessary to attract sufficient buyers to take the issue down.”

Yields on two-year notes gained four basis points to 0.79 percent. The spread between 2- and 30-year debt was at 191 basis points at the end of 2008, and has averaged 132 basis points over the last five years.

Etcetera. The only good news in this is that the massive inflation that’s coming should raise the price of real estate back above water.

What a difference 2 1/2 years make

UPDATE: went back for the open house today and 2 1/2 years and, more important, a $6.5 million price cut does make a difference. This house is not my cup of tea (it’s huge) but you couldn’t build it for less today and it would probably cost far more. Beautiful trim level inside and, this amateur thought the exterior quality matches that inside. I think it’s a good price now, for what it is, and if large houses are what you want, you should check this out.

What a difference a year makes

"Everything I am today, I owe to Bernie."

It’s exactly a year ago today that Walt Noel’s world was rocked by the arrest of his bestest friend, Bernie Madoff. And what a tumultuous year it’s been! The Fabulous Five have shed pounds and real estate, a few dozen lawsuits have kept Walter busy, the Fairfield Greenwich Group has closed and ol’ Walt’s own Round ’em Up Road cottage has been liened to the tune of $10 million. Next year only promises to be more exciting.

But here’s the question: will Walt and Monica show up at the RHC’s Christmas Party this Saturday, as they did last year? You know, greet their friends, commiserate with them about their losses, show off pictures of Andres in his new yacht and pass out invitations to the Villa Mustique? My social secretary is notoriously lax about these matters but I am not aware of receiving my invitation yet, so if any readers are going, please snap pictures of the happy duo if they show, and send them along, would you? FWIW pays top dollar for pictures and in this case we offer a genuine, million-dollar gift coupon applicable to the Greenwich property of your choice, signed by Frankie Fudrucker himself and printed on heavy-weight paper suitable for framing.

Or we’ll just send Scusie and let her make something up.

Can you still make money this way?

When prices were zooming upward back in the day, renovaters could pick up a dated old house, spruce it up and turn it for a profit. I’m not sure that’s possible in an environment of declining prices, so it will be interesting to see whether this project in Old Greenwich succeeds.

UPDATE: I got inside at the broker open house today (there’s a public one Sunday, 2-4) and it’s not bad. New mechanicals, in addition to the other items, and it all came out pretty well. Rooms are still small, the lot is what it is, but I like that this house was updated and renovated instead of torn down and replaced with another $3.5 million structure. I wouldn’t guarantee that $2.3 is the right price but it’s somewhere in the ballpark for this neighborhood. So again, I wish the builder good luck – if older homes can again be renovated profitably, costs will stay low (er) and that would be a good thing.

Tagged as Renovating for fun or profit

“Sure, I may have hit that bitch Linda with a celery stalk but with a piece of meat? Never!”

Florida woman arrested for felony attack with a slab of steak.

No surprise here; low-end house prices have already collapsed and the high-end will soon follow suit. One statistic caught my eye: nationally, 22% of all houses on the market have already taken at least one price reduction. I don’t have the time or inclination to manually sort the 570 or so houses currently for sale (we’ve lost a lot due to expirations but you can expect them back next month) but houses that went to contract in the past 30 days – 39 – are a more manageable number. Of those, 29 took price reductions, 10 did not (but still sold for a huge discount off asking price). Assuming the same percentage applies to active listings, our 66% beats Trulia’s 22%, hands down.