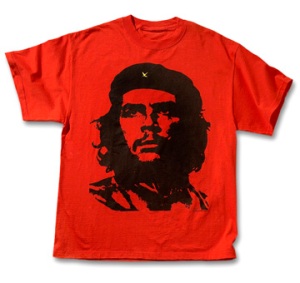 I’ve enjoyed – sort of – poking fun of the privileged class of Brunswick Boyz who sport Che T-shirts and spout nonsense. What’s the point of being 16 if you can’t be an idiot? Lord knows, I was. But here’s a nice posting from someone who takes the measure of an older idiot, Johnny Depp, and finds him deficient.

In a famous speech in 1961, Che Guevara denounced the very “spirit of rebellion” as “reprehensible.” “Youth must refrain from ungrateful questioning of governmental mandates” commanded Guevara. “Instead they must dedicate themselves to study, work and military service.”

And woe to those youths “who stayed up late at night and thus reported to work (government forced-labor) tardily.” Youth, wrote Guevara, “should learn to think and act as a mass.” Those who “chose their own path” (as in growing long hair and listening to Yankee-Imperialist Rock & Roll) were denounced as worthless “lumpen” and “delinquents.” In his famous speech Che Guevara even vowed, “to make individualism disappear from Cuba!  It is criminal to think of individuals!” he raved.

As luck would have it, this very month GQ magazine modestly crowned itself the crowner of the “25 Most Stylish Men in the World.”  Based on their cover, the top contender for the top spot seems like Johnny Depp, who appears shirtless–all the better to display his Che Guevara pendant.

In the mid 60’s tens of thousands of Cuban youths learned (as in 2010 thousands of Venezuelan youths are learning from one of his most dutiful disciples) that Che Guevara’s admonitions were more than idle bombast. In Che Guevara the hundreds of Soviet KGB and East German secret police STASI “consultants” who flooded Cuba in the early 60’s, found an extremely eager acolyte.  By the mid 60’s the crime of a “rocker” lifestyle or effeminate behavior got thousands of youths yanked off Cuba’s streets and parks by secret police and dumped in prison camps with “Work Will Make Men Out of You” in bold letters above the gate (the one at Auschwitz’ gate read: “Work Will Set You Free) and with machine gunners posted on the watchtowers. The initials for these camps were UMAP, not GULAG, but the conditions were much the same.

Today the world’s largest Che Guevara image adorns Cuba’s headquarters and torture chambers for its KGB-trained secret police. And Johnny Depp seems delighted to flaunt this emblem from his pendants, shirts and kerchiefs.

“I bet you were expecting a Hollywood putz,” boasted Depp to his obsequious Vibe magazine interviewer who seemed dazzled by Depp’s penetrating sagacity. “Bet you expected  some f**cking commodity without a brain in his head!”

Nothing of the sort, Mr Depp. In Hollywood, you tower as an exceptional intellectual commodity.

Tagged as Brunswick, Che Guevara and your Brunswick tuition, the school for boys who think they're girls