Don’t even try to fly home from Canada. Does anyone even pretend to think this is keeping us safe?

Here’s a good use of surplus cash

Google has donated $2 million to Wikipedia. I think that’s neat.

My favorite movie, but let it drown

A billion dollars to save Fargo from floods? You build on a flood plain, you pay the price. Don’t make us pay it.

This should satisfy Blodget

Lindsey Vonn wins gold medal for downhill, first American woman to do so. Cool! I guess I’ll tune in tonight and watch the tape.

TSA employees will now require that we have our hands swabbed for traces of explosives. This latest attempt to annoy and harass travelers comes just days after they forced the parents (one of whom was a policeman and identified himself as such) of a 4-year-old boy to remove his leg braces and try to walk through a scanner.

So here’s the deal: we all know we have hired and entrusted our security to low browed apes: at ten bucks an hour, we aren’t going to get better people and frankly, we can’t afford to. And, like all dullards, these people relish the authority and opportunity to abuse their betters that their government job allows them. But to pretend that we are getting any sort of security by having these people at airports is ludicrous. They can’t tell the difference between a four-year-old boy in leg braces and an 85-year-old great grandmother in a wheelchair so they torment and waste their time on both, while letting muslim scum bag bombers walk through.

The whole airport security show is merely that, with the bonus for Democrats of adding more union jobs. We are no safer – but much poorer- than we were on September 10th, 2001 and our government keeps expanding the charade. Maybe the next catastrophe will bring a change, though I doubt it.

Does anyone besides Henry Blodget care that the Olympics aren’t being shown live? I’m not watching the taped episodes at night, and certainly wouldn’t watch during the day, but Blodget’s Business Insider is running fifteen postings a day complaining about the lack of live coverage. Am I missing something here, or has Blodget got his head stuck where there’s no oxygen?

Obama to NASA: reach out to muslims 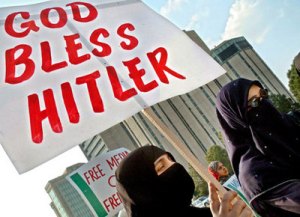 Our president wants NASA to become a part of our diplomatic branch. How, exactly does a scientific organization appeal to people who add “insha’Allah” to chemical equations?

Hot Air is sold. The Professor says, “Is InstaPundit for sale, you ask? A better question: Who would buy it?”

My proudest moment as a blogger was probably when, during a sit-down with reporters, bloggers and editors, someone suggested to the then-editor of Greenwich Time that he hire me and he said, “Chris, you’re radioactive”. Love it!

Oregon the latest foreclosure hot spot. This state of green just passed a new tax on the successful and industrious in hope of forcing them to subsidize the feckless and worthless. Unless other states figure it out and amend their own tax laws to attract good people, I think we’re going to see the state of Texas with all the best of our citizens and the other 49 states filled with loafing losers. That’ll be fun.

UPDATE: Connecticut Democrats, determined to lead the 49, want to add a penalty tax to Fairfield County’s executive bonuses. Go away! We don’t want you in our state! Brilliant. (Reader alert: link is to a site filled with disgusting photos of harelips – my advice, trust me on the accuracy of my reporting and skip hitting Greenwich Time to confirm).

Why do we buy soup?

Yesterday morning I woke up with oyster stew (or pan roast) on my mind. Why? Who knows – but it was snowing, sort of, and the memory of the Oyster Bar’s stew came back. It’s what I always ate as a very young boy on rare trips to New York City with my father: Museum of Natural History, Abercrombie & Fitch’s wonderful store on Madison (?) Avenue, then the Oyster Bar on our way home. So off I went to Fjord Fisheries for oysters and, a quart of milk, cream and a dash of smoked paprika (and a shot of Worcester sauce) later, we dined on great soup, fresh salad and a baguette. Bliss.

Why do I mention this, other than hoping to annoy FWIW’s Walter Noel so early in the morning? Because the Wall Street Journal reports this morning on Campbell Soup’s efforts at neuromarketing and it’s kind of interesting. Turns out, they don’t know why people buy soup and the buyers don’t either. They just do. So Campbell’s wired up (paid, presumably) consumers and follows them around the supermarket, trying to see what sets their brains buzzing.

I sympathize – how do you stir a fifty-year-old memory and set a consumer off on a quest? Campbell’s is redesigning its packaging, but I don’t know how that will work. Apparently, neither does Campbell’s.

The problem: It’s not easy to know what prompts people to buy soup, except for something warm to eat on a frosty day. When asked why they eat more soup or not, people tend to “say they don’t think of it,” says Doug Conant, Campbell’s chief executive.