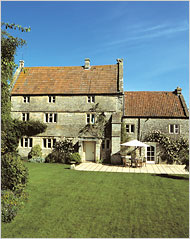 The NYT reports on an Englishman who has turned to an American brokerage firm to sell his 1,000-year-old house because, the owner explains, the English are “quite casual about things that are old.”

Mr. Wynn and his wife bought the “uninhabitable shell” in 1996 for 300,000 pounds. He called the renovation “jolly hard work” that involved tearing up floors and living in a temporary cottage with small children for more than a year.

In 2003, Country Life magazine named the five-bedroom, three-bath property England’s oldest private home (royal palaces and castles were excluded from the survey) after it was able to date some original features to the first half of the 12th century. It boasts terra cotta frescoes in the bedrooms and former residents like Bishop Geoffrey of Constances, a guest at William the Conquerer’s coronation. The home also belonged to the Earl of Gloucester, who came from the “same family” as Gloucester in “King Lear.”

These details made Mr. Wynn fall in love with the property, and he published a book about its history, though he said that when he bought it he did not know he had purchased England’s oldest private home. He thought it was only “800 years old.”

Mr. Wynn wants to sell his home because his work has been taking him more to London and his children are now teenagers. In 2008, Mr. Wynn tried to sell the property through the brokerage firm Christie’s and received interest from prospective buyers in Hong Kong and Saudi Arabia. But he had some concerns with the “understated” approach of the British to marketing his property.

A brief survey of British property listings confirms Mr. Wynn’s fears: while New York apartment listings for the gloomiest apartments are liberally filled with phrases like “breathtaking” and “magnificent” and feature glamour-shot photos, British estates are at most described as “charming” and feature mug-shot style photographs some Manhattan brokers would consider real estate blasphemy.

Through the years, Mr. Wynn found that Americans who visited his home were more enthusiastic about its history than Brits, who are “quite casual about things that are old.” So he contacted more than a half-dozen real estate brokers in New York and California before choosing Ms. Herman.

“I felt his passion,” she said. “I’ve learned to love that house without even seeing it.”

She said she would not clutter the listing with phrases like “Norman invasion gem.” Her brokerage firm’s Web listing says: “On the ground floor, exquisite details abound; massive honeyed-oak beams, a Norman arch and Cotswold flagstone. Winding elm stairs lead to the first floor bedrooms, past a 16th-Century window salvaged from an Elizabethan chapel, and up to the top floor and two additional bedrooms – the largest of which blends New York loft with English Tudor.”

Maybe. Seems pricey to me, despite its honeyed-oak beams. But there may well be an American with more money than brains who wants to feel like an old peasant. I’d bet one of those A-Rabs will prove to be the sucker.