Despite the title of this piece,  the recent re-sale of 22 Marks Road probably isn’t a true apples-to-apples comparison, first because I believe that to be nearly impossible, second, because there was some renovation done.  Nevertheless, I like this example because of the short time frame;  it sold $3,241,040 on April 21, 2008 and sold again, today, this time for $2,768,750.  That represents a $472,290 loss (plus costs of renovations) for the seller, about a 14.5% decline.

So does that settle the question, how far are we down since the high’s of early 2008?  Answer: 14.5%?  No.  This house showed very well the last time it sold but it actually showed better this time.   So you can make the case that it might have sold for even less if it had looked exactly the same as before.  Ah ha!  So we’re really down 20%?  Not sure.

Real estate is always going to be tough to be exact about.  The exact same house can sell for hundreds of  thousands more one year to the next simply because it is beautifully decorated, not necessarily expensively decorated, but just using carefully chosen colors and materials that make the place seem more inviting.

Appraisers produce nice, scientific-looking “reports” that are professionally bound,  run multi-pages, and often have impressive charts and examples. Those reports represent the appraiser’s best guess.  Like the art-experts at Sotheby’s Auction House, who estimated the value  of Giacometti’s “Walking Man” at between $18 million and $24 million, only to have it bid up to $104.3 million, an expert’s guess, while an educated one,  is still a guess.  The market, made up of human beings clutching their checkbooks, ultimately tell us what something’s “worth”.

The only thing I can say with any certainty about real estate is this:  If you’re grossly over-priced, you will get no bids.  That turns out to be true every single time.

Linemen For The (Fairfield) County

I know none of you need reminding but, like the reader who praised the Greenwich Police Department for coming to his rescue as he was literally cut off from civilization by that horrendous storm, I feel I must mention what a hell of a job all these utility workers are doing all over Greenwich.  In addition to our usual guys from Connecticut Light and Power,  I’ve seen trucks from Michigan, Ohio, Pennsylvania, even Hawaii (ok,  not Hawaii).  The mess they are handling is huge, intractable, even, at times, dangerous, but they’re just getting it done with beautiful efficiency.

It reminds me of why all our jobs are, in fact, NOT being “shipped overseas”.  American workers are un-matched throughout the world but you rarely get a chance to sit there and watch a bunch of them do their stuff as you can now, on the streets of Greenwich.

And, of course, it 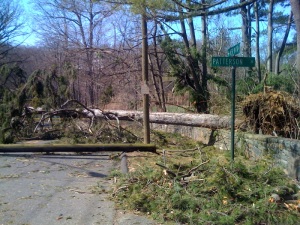 Corner of Patterson and Patterson

"Thompson Electric" which came all the way from Ohio, working on North Street

is easier to observe expert linemen do their job well than it is to watch, say, a  software designer or medical researcher, or, yes,  a successful hedge-fund manager, but in every category of employment, this country has many, many millions of people who are really  good at what they do.

(Chris likes to call this  “jingoism” but I’m just statin’ the facts.)

The scene today, corner of Patterson and North Maple...