Not only did the trees come down during my absence but the Demmerkrats went and put my partner/pal Fudrucker in charge of their party here in Greenwich. Fine by me – I’ll listen in on all their strategery  sessions held in our office and report on them here, but I’ll bet Fudrucker’s son Christian is pissed as Hell at being labelled one of Frankie’s “Twin daughters”. You know, Frankie’s been the Dem’s sacrificial lamb at least twice now, once as candidate for the state legislature, again for First Selectman and you’d think Greenwich Time would have learned by now who’s in his family. It’s just not that difficult. 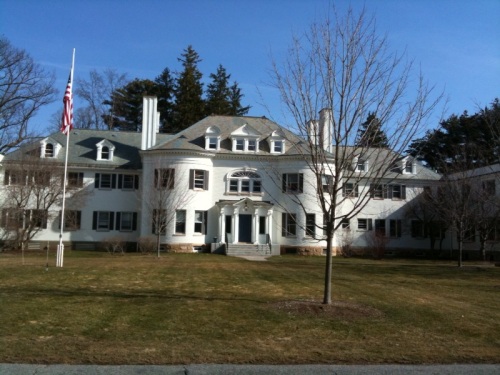 So while I was in the area, I stopped in front of my great-grandfather John Caldwell’s house on the main drag in Stockbridge. It’s been converted into a mental home open to the general public, rather than just the nutty Caldwell and Fountain family members so you’ll see that wings have been added, but the central core remains. It’s now the Austin Riggs Center, or something like that – James Taylor spent time here (“Fire and Rain”) as did the first Mrs. Norman Rockwell. In fact, Rockwell moved to Stockbridge because his wife spent so much time here being electro-shocked for her depression. They doctors cured her depression by electro-shocking her to death – oops! – but I found it intriguing that the poor lady spent years in the house my father stayed in in 1910. The circle is closed, I guess.

After seeing the exterior (I didn’t dare enter, for fear they wouldn’t let me out), I went down to the Rockwell Museum, which I found  disappointing. I’d never thought much either way of the man’s art, so I was neutral before my arrival. I toured the place backwards, from his last works to his first, and concluded that, for my taste, he was at best a sentimental illustrator, but no artist.

I was probably jaundiced by his awful output in his last years, when he developed a social conscience and a didactic attitude to accompany it, but good Lord, the guy may have been brilliant with a paint brush, but everything else just sucks – to me! – I acknowledge that there are many people with refined sensibilities who appreciate his touch , so I’m not claiming any authority here. But to my eye, he was a mawkish, bad artist. I’ll post this while I go look for a picture of “Freedom from Want” which illustrates my objections. 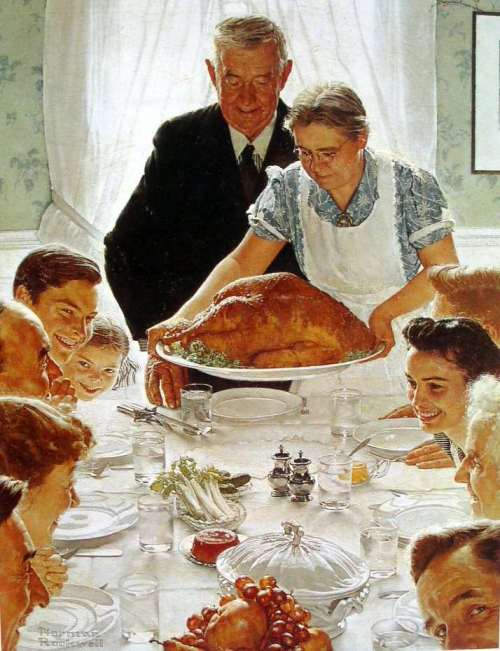 Take a look at the little girl’s head on the left – Rockwell might just as well have snapped a photograph of a kitten and pasted it here – it’s just awful composition, and what the f**k is going on with the guy in the lower right? And what about the grey haired lady just above him? Follow her eyes: she’s staring at and talking to no one. Alzheimer’s amidst the turkey. Phoohey –  I say, give ol’ Norm  a cigar – I’ll take a Dutch Master.

Gideon was threatening to turn this into an informative blog about real estate, and how could I ever match that? Plus, I leave you guys alone for ten days and you tear up the pea patch! I came into town via King Street having been completely cut off from local news and discover that a bomb went off here last Saturday – wow! Good time to go away.

But now, let’s get this blog back to its proper form – here’s a picture I took of a service provider in Salsbury, CT: 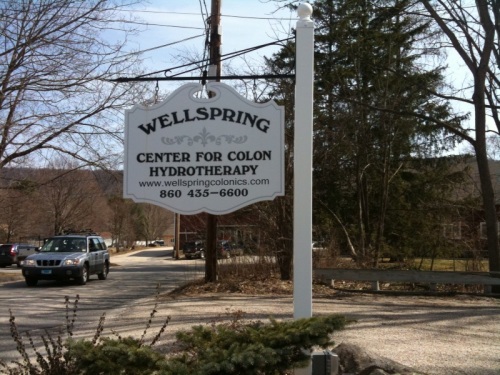 I was too timid to go inside and inquire what, exactly, they do here, but I’m pretty sure I don’t want to know.

Chris Fountain’s BACK (not) but maybe soon!

(Gideon Fountain “vamping” until the Great One returns to the stage)

Ok, now Uncle Chris should be home ANY MINUTE and I’d like to suggest  a few rules to make his home-coming as nice as possible…

First, let’s not trouble the old boy with lots of complaints, gripes, and negative comments like, for instance (but not limited to), the following:

2.  “Thank God you’re back, we couldn’t TAKE much more of Gideon and his unpleasant over-use of capital letters!”

3.”Why did you put that idiot in charge of your blog, ANYWAY??”

Got it?  None of that negative stuff.   This means YOU, “anonymous”, and also YOU, “anonymous”, and I’m particularly referring to “anonymous”. In closing, I would like to see all of you write something NICE for Uncle Chris.  Did you miss him?  Tell him so!  Don’t be shy with the superlatives.  Perhaps NEXT time he’ll bring along his damn I-Phone and he won’t even NEED a “guest-host”.  Next time.

1.  Solomon prays to God every day to win the lottery.  Day after day, month after month.  Finally he can take it no more, he cries out “Oh, God, why?  Why won’t you let me win the lottery” and then God speaks to him, “Sol, meet me half way. Buy a ticket!”

2.  Guy’s walking through the diamond district, midtown Manhattan, he sees a shop with lots of watches on display.  He walks in, says, “I want to buy a watch.”  The man behind the counter says, “We don’t sell watches.”  The  guy says, “You’ve got a window full of watches! I wanna buy a watch!”  The man says, “Sorry, we don’t sell watches.”  Guy says, “Then why do you have all those watches in the window?”  The man says, “I’m a moil, whatta you want I should put in the window?”

(A moil is someone who performs circumcisions.)