Are we losing (have we lost) control of our border?

21 Willowmere Circle sold for something like $5.75 million this past January (an August contract). I suggested when it was first listed that it was a tear down, despite the huge money spent by the sellers renovating it (hmm, didn’t I post on this subject yesterday?) and I see, reviewing tomorrow’s P&Z agenda, that the buyers are proceeding to do just that.

Not an example of fine architecture anyone will miss, but $5.7 for land indicates that Grade B waterfront still commands a nice price.

Fabulous photos of that volcano

I mean, really! Don’t miss these.

The man IS a prophet!

Obama: Boxer could lose unless her supporters help.

Comments Off on The man IS a prophet!

What was Peter Brant doing in California?

I swear, Honey, I thought it was a Christmas tree!

The real scandal in the Goldman scam

According to the WSJ, it was Moody’s and S&P, who gave this junk triple A ratings. The game would never have worked without that”.

Heading downhill at an even faster pace

Having seen its real estate portfolio lose half its value in the past year, Calpers announces that it will only invest in “socially conscious” projects. What the hell – they figure California’s taxpayers are going to end up footing the bill for those pensions anyway.

Comments Off on Heading downhill at an even faster pace

Dick Fuld – “for a measly $300 million you expect me to keep track of what was going on?”

Greenwich’s (and Lehmans’, lucky them) Dickie Fuld testified today that he had “no fucking clue” anyone was trying tricky accounting moves to make his firm appear solvent. “My wife’s buying $40,000 a month in linens for our seventeen houses – you think I had time to supervise her and 28,000 employees? Get lost.”

Fuld’s testimony, while aggressive and even combative, may not end the matter. More soon, no doubt.

UPDATE: Oh, and it causes hurricanes, too!

Dick Blumenthal, once again demonstrating his political courage, has filed suit over the Madoff matter, some sixteen months after the SEC, the U.S. Justice Department, New York, Massachusetts and a dozen private lawyers had already done so.

That’s the man he is – a cautious, plodding, political coward. He could have gained his coveted senate seat decades ago had he an ounce of steel in his spine but he’s not that kind of guy. In fact, he’s a liar and a loser.

UPDATE: Is he all wet? Blumenthal has always claimed that he was a varsity swimmer at Harvard (class of 1968, I’d think). A friend of mine who really was a varsity swimmer in college and who has observed Dick, many times, over the years, attempting laps at the Hartford YMCA, insists that this guy could never have made varsity on any team, even Harvard’s. I don’t know from swimming, but I’ve seen a couple of “collegiate sailors” going through their paces at the Riverside Yacht Club and it’s fairly easy to spot an imposter.

Any Harvard grads out there with access to varsity lists?

More eruption from that pesky volcano, new ash heading towards Great Britain. The GHS kids “trapped” in Greece (and no doubt having the time of their lives) are supposed to fly home tomorrow but I know of at lest one parent, there with a couple of his kids, who just declared an extended vacation and headed off to the islands with his family. Smart guy.

This came on $2.295 in October, which I thought was a pretty good price, but it sold direct (that means to a neighbor or friend, no commission, usually, and don’t we hate when that happens?) for $1.950. Good deal.

On the other hand, 25 Lockwood, a new spec house, was listed today for $3.2 million. Maybe – I’m not sure, but it appears that there’s a FARport here, instead of a garage – for that price …. We’ll see.

Second prize would have been an endorsement from Cos Cob

Gubernatorial candidate* Ned Lamont claims to have won the backing of the Naugatuck Valley Demmerkrats. I’m not well versed in politics but I’ve always assumed that to win, you had to have oodles of money. What can the Valley towns contribute, other than cast-off naugahydes and baskets of toxic, glow-in-the-dark fish, fresh from the Housatonic?

*Hey Hiram, how does “governor” turn into gubernatorial? 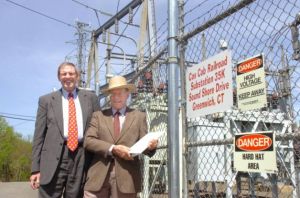 Father's in the pig pen, you'll know him by his hat

Former real estate developer Barry Montgomery who is, by my reckoning, 86-years-old, has sued Greenwich to prevent development of a park “because the cell towers located there are too dangerous for kids”.

Leaving aside the fact that Montgomery has long since passed the age where he need worry about having small children of his own, wouldn’t the saner approach be to keep his great-great grandchildren out of the park if he were actually worried about their safety?

Barry’s getting a free ride on this one, presumably, because his able brother and attorney  Dean (left, without a hat but with a tie that needs addressing) is doing the suing, but what, other than boredom, explains this suit? The man lives nowhere near the power plant site so personal use is surely not an issue. Is he just cheesed that Oprah is leaving daytime TV?

Or is the old man coming out of retirement? Does he have his own plan for the site? Whatever his motive, it sure as s**t isn’t concern for hypothetical children.

Seems excessive to me, but I’m in another price bracket. Makes Greenwich look cheap, though.

Death by a thousand cuts

Ten price cuts (so far) today, not one of which would stir me into re-showing the property. You have to trust me on this: buyers aren’t going to bid within 10% of your asking price anyway, so cutting it 5% is not going to impress them – they’ve already discounted your price by far more, and see your puny price cut as just acknowledgement of a falling market.

Or that’s my opinion, anyway.

(John  the Baptist gets it all over with at once)

This Deerpark house is back, having expired a few weeks ago, at its same asking price of $9.750 million. That’s better than the $12. 750 it asked for during all of 2008, but I personally don’t see that the market has improved since last October, when this place took a $3 million price hit and still wouldn’t sell.

But it’s a great house – built by Hobbs, and the owner clearly is determined to either get his price or stay put, and more power to him.

But it also serves as an example of why I like dealing with banks and troubled lenders these days – they have a more realistic view of the market or at least, we share the same view.

Comments Off on Stubborn sellers

It can be tough to price a house

Now, on the one hand, I compare this house to 7 Dandy Drive, brand new, very nice construction with high ceilings and all that stuff that sold for

You put those two sales together and 65 in its renovated condition doesn’t seem crazy at all but I’m still uncertain I’d attribute so much value to an extra-large yard.

But that’s what makes a horse race.

On the other hand, there are some optimists out there

At some point I guess someone has to step up and vote for the future. This 1909 house, a one-family in a two-family zone, was priced at $1.725 in February and is reported as “pending” today. Apparently some builder is looking two years down the road and sees opportunity here. Assessment is $855,000.

Okay, the + $2 million market isn’t completely dead, but this is what you’re up against

This 1920’s Round Hill home was renovated in 2004 and put up for sale in 2005 for $7.6 million. In November of last year it went to contract and closed today for $4.6 million. Assessment was just $3.1, but I wonder whether the appraiser caught up with the renovations?