What if you held a demonstration and you had to bribe people to come?

“Occupy Darien” a bust today, (dis) organizer will hand out $1,000 down at Grand Central tomorrow to bribe fellow nut jobs to attend. She was, she claimed, willing to pony up $3,000 but was told it would be a waste of money. Hell, for fifty bucks I’ll drive up there and piss on her signs myself.

Sure, drag poor ol’ West Virgina into it

In my state, a virgin is a girl who can run faster than her brothers. Don't ask me about virgin wool!

Comments Off on Sure, drag poor ol’ West Virgina into it

But what if Yale had won the Game this year? 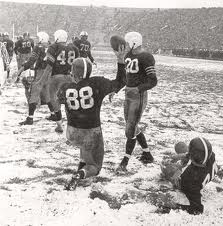 Yale football coach fired for padding (lying on) his resume.  The guy went 16-14 in his tenure and lost the Harvard Yale game this year (and maybe in the years preceding – I don’t follow these things). I do wonder whether the school would have fired him if he’d achieved a better record, but perhaps I’m just being cynical.

Odd: no mention of the primary reason for the “rebenchmarking”, namely that the NAR is nothing but an advertising front for the US housing industry.

Price increases in a declining market – why?

160 Bedford Road, a beautiful old (1937) house on 8 acres, sold for $3.3 million in 2007. The buyers attempted to flip it, without doing anything substantial to the house, for $5.295 in November that same year. Seven price cuts and four years later, its price had dropped to $2.2 million. It was briefly under contract, fell out of contract and was relisted as active this September, still asking $2.2. Today, its price was increased to $2.9 million.

In the years since this house was first offered for sale it has been allowed to deteriorate badly with the result that, in my opinion, it’s valuable as land only. So why would its owners think that it has suddenly gained $700,000? The mind boggles.

Here’s a decent buy, I think

31 Orchard Street sold yesterday for $948,000. Not a huge reduction from its 2007 purchase price of $1.160 million but the sellers had put in some substantial bucks in a generator, central a/c and that sort of thing so it’s a better deal than it first looks. For those who like Cos Cob (joke, CC!) Orchard’s a great location – very convenient, nice street.

This sale does raise a question that’s been nagging me, though: it’s been my general impression that improvements to a house don’t add to its resale value, and statistics for other parts of the country bear this out. One the other hand, nothing kills a showing more than an inadequate, dated kitchen and customers don’t even seem to want to redo bathrooms any more. So maybe you the seller have to do these things to sell your house at all? Despite the fact that you’ll be digging deeper into your pocket? I suspect that’s the case these days, but I really have no numbers to confirm that suspicion. Comments/experience welcome.

I can’t have overpaid, I’m an expert!

85 Indian Head Road, land in Riverside asking $3 million, has been withdrawn from the market, presumably to await better times. The property is mostly wetlands with a cesspool (not a septic system) and was priced 50% higher than better building lots directly across the street, which did sell, quickly.The self-proclaimed expert paid $2.335 million in 2006 for this patch of Tobacco Road and one can certainly respect his refusal to admit his mistake, but reality sometimes bites.

This should be fun

As I write (10:00 a.m.) the National Association of Realtors is coming clean on their double-counting of home sales and will release new, lower totals of existing home sales for the past five years. It won’t be pretty.

I’m sure their mother warned them against this, but did they listen?

Man dies of overdose after eating cocaine hidden in his brother’s butt. No, not a cigarette.

No luck on Leona’s Round Hill place

Expired unsold today – guess that happens when you pay $31 million for a property and then jack up its price to $55 million for resale. But here’s a curious thing: the tax records seem to show an assessment of just $1.637 million. Could that possibly be true or is this a misprint? I don’t know.

UPDATE; A reader says that the assessment is $17 million, which seems more accurate (probably its full market value)