Sh*t, looks like Diana Ross blackballed the guy from the Belle Haven Club 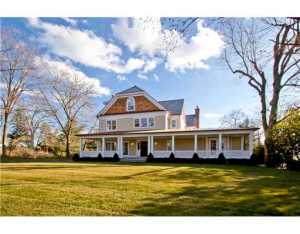 Irishman Sean Dunne, known as “The Bane of Balls Bridge” back when he was diggin’ potatoes in the Old Country and the guy who pissed off half of Belle Haven for “not being our kind” has put his house at 38 Bush Avenue up for sale without ever moving in. Asking $6.395 million, which seems an optomistic price, given the roar of the Interstate across the street. But perhaps those photoshopped clouds block the noise or maybe this was a price dictated by Dunne’s creditors. Or the man may just enjoy sitting on overpriced houses, like his project on Bote Road.

For all of that, the house itself looks okay to my eye, and I wonder what all the fuss was about. It could have been inspired, I suppose, by his reportedly aggressive personality, not that that would set him apart from anyone else in Belle Haven. In fact, I would think he was exactly “their kind”.

11 responses to “Sh*t, looks like Diana Ross blackballed the guy from the Belle Haven Club”