The story of that Greenwich developer going bust up on Martha’s Vineyard got me thinking about my first visit there in August, 1969 when four of us rode our bikes up from Riverside and spent a couple of weeks at a campground, Cranberry Acres, not too far from the ferry. We hitchhiked all around the island, lived on maybe five bucks a day and, naturally had a great time, from what I can remember.

I Googled “Cranberry Acres” just now and found this article, written in 2008, from a guy who was also on the Island in August, 1969, also stayed at Cranberry Acres, hitchhiked around the island and was busted, along with Tom Rush, for skinny dipping off the beach at Gay Head. The only difference in our experiences was that we were never arrested.

1969 had the moon landing, Woodstock, Nixon and an impending draft for kids my age and for me, a final year of high school to suffer through, but on balance, it was a hell of a time to be young, irresponsible and stupid.

But will Tesei speak?

Pope says communism does not work in Cuba

Comments Off on Breaking news from 1959

Do former senators go to jail?

Relax, I got your money out

I doubt it – not when a Democrat – controlled Senate would have to bring charges against one of its own.

John Corzine caught lying to Congress – transferred $200 million of client funds to J.P. Morgan to cover overdraft, then swore under oath he hadn’t done anything of the sort.

Jon S. Corzine, MF Global Holding Ltd. (MFGLQ)’s chief executive officer, gave “direct instructions” to transfer $200 million from a customer fund account to meet an overdraft in one of the brokerage’s JPMorgan Chase & Co. (JPM) accounts in London, according to an e-mail sent by a firm executive.

Edith O’Brien, a treasurer for the firm, said in an e-mail sent the afternoon of Oct. 28, three days before the company collapsed, that the transfer of the funds was “Per JC’s direct instructions,” according to a copy of a memo drafted by congressional investigators and obtained by Bloomberg News.

Corzine testified that he never intended a misuse of customer funds at MF Global, and that he doesn’t know where client funds went.

“I did not instruct anyone to lend customer funds to anyone,”Corzine told lawmakers in December.

Three days from listing to accepted offer for 67 Lockwood Lane in Riverside, asking $1.595 million. Broker open house was yesterday, for crimminy’s sake so someone moved quickly. This was one of those Murphy houses he stuck around the neighborhood in the late 60’s and 70’s which means cheap construction materials and slap-dash building techniques that allowed prices in, I think, the $60,000 range. But this had some attractive features.

It was renovated last year and looks clean and updated; it’s on the good part of Lockwood Lane meaning that dead end portion of the street that extends across and south of Lockwood Road, rather than its northern portion that crosses the Thruway; and it backs up the Eastern Middle School’s playing fields and tennis courts, so kids have a bigger back yard than any spoiled brat in the backcountry. That all adds up to a pretty good deal so I’m not surprised it sold. But still, 3 days? Gosh, it reminds me of the wacko days of the mid-80s.

Dribs and drabs of activity reported

6 Palmer Terrace in Riverside asking $1.895, has an accepted offer after just nine days. Not surprising – it was renovated in 2005, is in excellent condition, located on a dead end street and offers far more house than any similarly priced homes in Riverside. Gary Disher set the price, presumably, and as usual, did it well.

717 Riversville, way, way up there just past the Audubon, is back up for sale again, this time asking $10.5 million. The seller paid $8.850 for it in 2009 on an original 2007 asking price of $14.700 and I suppose he figures he got such a bargain that he can now fetch a premium for his perspicacity. I remember the house and it was built to withstand a Force ten storm and very nicely finished but, given its location so far north of town, I thought the buyer paid too much. He must not agree.

Somewhat to my surprise, 42 Bote Road, that Sean Dunne spec house asking $3.3 million, has an accepted offer. This is a nice, well-built home, but my client and I couldn’t make the numbers come out as Mr. Dunne wanted them to, notwithstanding his $600,000 price cut from $3.9. But someone else could, so good for them.

On the corner of North Street and Parsonage, 2 Parsonage is back on the market, asking $4.295 million. The seller paid $3,684,375 million (that must have been one protracted negotiation) for it in March, 2008 and its listing makes no mention of any improvements made since so I assume the price is based on an assumption that the market for this area has improved recently. That isn’t what I’ve noticed but as always, and as evidenced as recently as this morning’s news from Bote Road, I can be wrong.

When Greenwich developers aren’t despoiling our town, they’re busy bringing the Greenwich look to other areas

Corey Kupersmith, the Connecticut-based developer who a decade ago waged a bitter public battle to build a golf course and a development on the largest tract of undeveloped forest in Oak Bluffs, now faces foreclosure on almost all of the property he owns in the Southern Woodlands.

Twenty of the 26 buildable lots that make up Mr. Kupersmith’s unfinished luxury-home subdivision known as South Wood Farms face foreclosure by People’s Bank, which has scheduled a public auction for 11 a.m. on April 19. A legal notice announcing the auction directed bidders to bring a certified check of $50,000 to the auction, to be held on the premises. Two more lots designated for open space are also up for auction.

The controversy over Mr. Kupersmith’s attempts to build a golf course is still a raw subject for many Oak Bluffs residents and town officials who picked sides in one of the most divisive chapters in the Island’s history. Proponents defended the proposed development as an economic driver, while others denounced it as yet another blow to the Island’s rural character and an environmental threat.

Mr. Kupersmith’s 18-hole golf course was rejected three times by the Martha’s Vineyard Commission, most recently in 2004. Rebuffed, Mr. Kupersmith threatened to build a “maximum density” 366-home affordable housing project on the property but was again turned down by the commission. He then challenged the commission’s ability to review affordable housing in court, but lost the case.

At one point, one of his associates, Brian Lafferty, threatened to clear cut 270 acres of trees on the property, challenging the commission to stop him. He cut about 250 pitch pines, and afterwards posed for pictures with a chainsaw surrounded by stumps before the state Natural Heritage Program issued a cease and desist order. 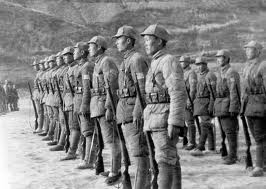 Obummer is out touting pipelines and oil spills and dead arctic animals and stuff and some of his base is getting pissed off. Not Dollar Bill, though, who now calls Hussein “the Energy President”. Useful idiots.

For a brief example of useful idiots in action, it’s instructive to remember the US Communists role in World War II.

Okay, that one’s an actual book that you’ll have to click on and read pages. Here’s easier access to the same story, via Wikipedia.

On September 17 the Soviet Union invaded eastern Poland and occupied the Polish territory assigned to it by the Molotov-Ribbentrop Pact, followed by co-ordination with German forces in Poland.[27][28]

The British, French, and German Communist parties, all originally war supporters, abandoned their anti-Fascist crusades, demanded peace, and denounced Allied governments.[29] The CPUSA turned the focus of its public activities from anti-fascism to advocating peace, not only opposing military preparations but also condemning those opposed to Hitler. The CPUSA attacked British Prime Minister Neville Chamberlain and French leader Édouard Daladier, but did not at first attack President Roosevelt, reasoning that this could devastate American Communism, blaming instead Roosevelt’s advisors.[29]

The CPUSA dropped its boycott of Nazi goods, spread the slogans “The Yanks Are Not Coming” and “Hands Off”, set up a “perpetual peace vigil” across the street from the White House and announced that Roosevelt was the head of the “war party of the American bourgeoisie.”[31] By April 1940, the CPUSA Daily Worker‘s line seemed not so much antiwar as simply pro-German.[32] A pamphlet stated the Jews had just as much to fear from Britain and France as they did Germany.[32] In August 1940, after NKVD agent Ramón Mercader killed Leon Trotsky with an ice axe, Browder perpetuated Moscow’s fiction that the killer, who had been dating one of Trotsky’s secretaries, was a disillusioned follower.[33]

In allegiance to the Soviet Union, the party changed this policy again after Adolf Hitler broke the Molotov-Ribbentrop Pact by attacking the Soviet Union on June 22, 1941.

Throughout the rest of World War II, the CPUSA continued a policy of militant, if sometimes bureaucratic, trade unionism while opposing strike actions at all costs. The leadership of the CPUSA was among the most vocal pro-war voices in the United States, advocating unity against fascism, supporting the prosecution of leaders of the Socialist Workers Party under the newly enacted Smith Act,[34] and opposing A. Philip Randolph‘s efforts to organize a march on Washington to dramatize black workers’ demands for equal treatment on the job. Prominent CPUSA members and supporters, such as Dalton Trumbo and Pete Seeger, recalled anti-war material they had previously released.

A new level of leadership

Hits the hustings to promote his administrations “accomplishments” in producing more energy by visiting already existing pipelines built by private enterprise in the face of and despite opposition from the Obummer team, takes credit for “approving” that portion of the Keystone project that didn’t need his approval and is already being built and will have nothing to transport without Canadian oil, which Obama won’t let into the country. Best of all, he blames the Solyndra bankruptcy on Congress and Republicans who long ago approved spending other people’s money on friends of politicians. The idea of doing that for his friends would never have occurred to him, our Golfer in Chief says, had those rascally Republicans hadn’t done it first. “Don’t let a good boy go bad”, he pleaded, “take the car keys”.

Addendum: are you enjoying the useful idiots like Dollar Bill scrambling to get on board  their leader’s new meme and, having fought against oil and gas development for decades, now crow about “the energy president” who has spurred record drilling, opened thousands of new leases for exploration and returned incandescent light bulbs to the White House? I have, and it is exactly the same behavior the parents of these dolts (or in DB’s case, DB himself) engaged in during World War II, when Stalin was their king. They pushed for neutrality in the war so long as Stalin and Hitler had their non-aggression pact and literally the morning after Hitler broke that pact and  invaded Russia, had received their instructions from Moscow and started the “Open a Second Front Now” movement.

I look forward to Dollar Bill urging us to Open the Arctic National Wildlife Refuge to drilling now! And he will, too, just as soon as he receives his instructions from his masters.