Pizza for the Little People

No, you're not invited

Billionaire fat cat tosses pizza fund raiser for Obama – $40,000 per head, but that pizza will be served on sterling silver plates (cardboard is so tacky) This is where Dollar Bill starts running in circles shouting, “Koch Brothers! Koch Brothers! Power to the People, right on!”

So I was wondering what, besides basketballs with the One’s image on it, was also from China and also available for your pleasure and adulation. Turns out, there’s plenty.

And of course, the flag

Everyone off before the bridge falls down!

Island Surveyor sends along this New York Times article on Cos Cob. Nice write-up, even if one resident of Strickland Road describes the traffic on I-95 as mere “twinkling lights”. She should become a realtor and join company with the lady who described the Merritt’s noise as “like a babbling brook”. Still, I know the house she lives in, and it is a beauty – I’d certainly live there with pleasure, babbling brooks and twinkling lights notwithstanding.

Other than they’re both made in China, can you see any similarity? 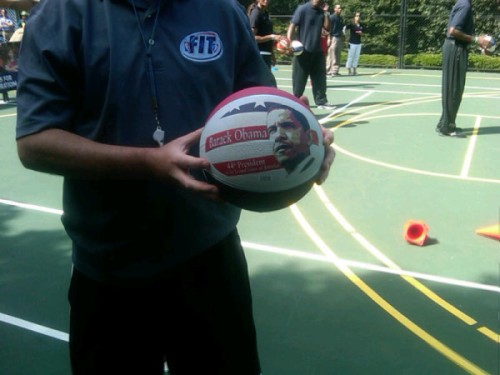 We keep pointing this out: like everything else on the liberal agenda, climate alarmism is about control

California’s war on its suburbs. Ever since Americans escaped to Levittown, government planners have been trying to bring them back. Climate Alarmism is just the latest weapon in their arsenal but they surely won’t rest until we’re all in cities under their control with cars, if cars are permitted at all, restricted to an 11-mile range and everyone dependent on mass transit because, damn it, the people are too stupid to schedule and run their own lives.

In San Francisco and San Jose, for example, the Association of Bay Area Governments has proposed that only 3% of new housing built by 2035 would be allowed on or beyond the “urban fringe”—where current housing ends and the countryside begins. Over two-thirds of the housing for the projected two million new residents in these metro areas would be multifamily—that is, apartments and condo complexes—and concentrated along major thoroughfares such as Telegraph Avenue in the East Bay and El Camino Real on the Peninsula

For its part, the Southern California Association of Governments wants to require more than one-half of the new housing in Los Angeles County and five other Southern California counties to be concentrated in dense, so-called transit villages, with much of it at an even higher 30 or more units per acre.

The campaign against suburbia is the result of laws passed in 2006 (the Global Warming Solutions Act) to reduce greenhouse gas emissions and in 2008 (the Sustainable Communities and Climate Protection Act) on urban planning. The latter law, as the Los Angeles Times aptly characterized it, was intended to “control suburban sprawl, build homes closer to downtown and reduce commuter driving, thus decreasing climate-changing greenhouse gas emissions.” In short, to discourage automobile use.

Ali Modarres of the Edmund G. “Pat” Brown Institute of Public Affairs at California State University, Los Angeles has shown that a disproportionate share of migrating households are young. This is at least in part because it is better to raise children with backyards than on condominium balconies. A less affordable California, with less attractive housing, could disadvantage the state as much as its already destructive policies toward business.

Don’t believe me? Try this: (And what do you suppose “social housing units” are? Prisons?)

What’s green and yellow and then even more green (as in sustainable) all over?  Well, since you’re looking at a picture of it we’re guessing you were able to  surmise that it’s Koz Architecture‘s newest  project – 28 colorful and airy social housing units for Courbevoie, France. The  multi-hued complex was designed as a denser alternative to the widely spaced-out  private homes of suburbia that would  still allow occupants to feel a sense of ownership, individuality and escape  from the hectic city. Aside from being bright and cheery (there is ample daylighting in all rooms  including the bathrooms), the apartments offer a rainwater collection system, a green roof and loggias for  residents to use as their own private greenhouse.
Read more:  KOZ Completes 28 Green (Literally) and Yellow Stacked Apartments | Inhabitat – Sustainable Design Innovation, Eco Architecture, Green Building

If he were like our present day Messiah, he’d have his image emblazoned on basketballs given to children attending the White House Easter Egg hunt.

UPDATE from EOS: Okay folks. here’s news you will love. I just called Baden [Biden? – Ed] HQ in Washington and asked if the basketball is made in USA. Nope. They are made in China. Now you tell me, if that’s not the better story, I don’t know what is.

He'll pay your mortgage, too!

Spring vacation for the great unwashed, and all the public school families are off doing whatever those people do – touring Port Chester? We do have a “new” listing, 465 Round Hill Road, which has been on the market since early 2010, first at $12.950 million and expiring unsold just this past December at $10.995. Today it’s back, and asking $12.550 milion again. That’ll teach you not to have bought it last year, eh? There are 21 houses like this currently for sale at the $12 million and above range, and two sold last year. Hurry hurry or, as brokers like to say, “this one won’t last!”

But if they WERE employed, they’d have paid sick leave and a minimum wage of $50 an hour!

I don't get it

Teens lose retail jobs because no one’s hiring them. Hmm – it costs more to hire them than they’re worth – what could the matter be?

UPDATE: In an earlier comment, Dollar Bill (left) pointed out that San Francisco has paid sick leave laws and ‘”it’s doing fine”. As of last September, overall teen unemployment in that city is 25.4% and black teen unemployment jumped to 46.5%, up from 39.2% the previous July. But as usual, it’s not results that count with liberals, it’s whether their intentions are good.

Word has it that NYC’ Plaza Hotel is being sold for $600,000,000, down a tad from the $670,000,000 the current owners paid for it in 2004. (UPDATE: FF and another reader point out that the owners sold off a slew of rooms as condominiums, so they’re doing quite well here) Still a chunk of change – family lore has it that my great-grandfather, a builder in NYC in the 1800’s, was offered the land the Plaza sits on but rejected it, reasoning that the pond/swamp across the way would cause a wet basement. As the story goes, the first Plaza Hotel did indeed have a wet basement and was torn down in 1907. No one was going to pull the wool over ol’ great grandpa’s eyes!