36% of all immigrant-headed households are included in that number. Milton Friedman once said that a country could have open borders or a welfare state, but not both. Obama says, “yes we can! We can have it all.”

New Haven lawyer arrested for breach of peace after wearing legal handgun into “Batman” showing. He was licensed to carry, presumably the theatre owner didn’t forbid licensed weapons on its premises (which it is entitled to do)) and he was causing no trouble. But come on, that movie, now? It’s possible he felt the need for protection in case the film drew a wannabe shooter, but I don’t think it was very smart. UConn Law grad, I’m sorry to note.

UPDATE: I do wonder, though, at this arrest. Are citizens required to disarm for a suitable period after a manic in another state massacres other, unarmed citizens? The fun part of being a lawyer is being able to afford to make a federal case out of anything. I still wouldn’t have gone armed to the movie but then again, I wouldn’t go to a Batman movie anyway – not my taste.

There are so many mistruths, blatant lies and just plain ignorance expressed in this article that it isn’t worth debunking. I mention it only because, like everything else printed by Business Insider, the more you know about a subject the more you realize how little they do.

306 Round Hill Road, $1.825 million, on a 2011 price of $2.999. I’m baffled by this sale. It’s an 1804 home with much of the original building still intact but its surrounding land was sold off long ago and the Merritt Parkway built next to it. I love truly old houses, and Pal Nancy and I even restored an 1835 farmhouse in Maine when we were young and stupid, with plenty of time and no children on our hands. But I wouldn’t put that same labor into a house on just 2 acres that was buried under the noise of a highway.

Someone else is of a different opinion, obviously. 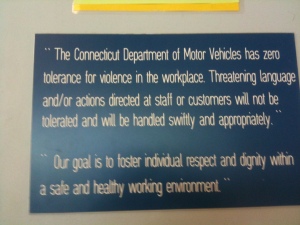 DMV’s answer to impossible lines and surly employees: warn customers not to hit them!

Just spent the past 2 1/2 hours driving to and waiting in line at the DMV to pick up a friggin’n form. Can’t download such a form, God forfend, but the DMV’s site, after proclaiming “Welcome to the 21st Century!” –  I kid you not – tells me I can file a request online and they will mail me one within 3 weeks.
So okay, first stop, the Triple A office on High Ridge which, it turns out and despite the DMV’s promise otherwise, has no forms available because it isn’t permitted to distribute them. So it’s back in the car and off to Norwalk.
But in Norwalk there are no longer forms available for pickup by the door; some bureaucrat must have decided that the public was helping itself to too many of them, so now they are doled out, one at a time, as needed, by a surly clerk protected by a counter and a 45-minute line. Only one clerk on duty at a time, of course – these are unionized state workers, after all.

Is this any way to run a railroad? Not if the DMV were operated by a private entity. As a branch of the state, though,  it runs exactly as if Russians were in charge. Hope and change. Then revolution.

Accepted offer on a good house

42 Will Merry, asking $2.350, finally has a buyer. This house is on the good side of Will Merry – away from the Merritt and on a back lot, in fact, so highway noise is negligible. It was renovated in 2002, has a nice pool/terrace area and a great kitchen and layout. I liked it very much and showed it to a couple of different clients but at the time it was still priced too high. If the house had any fault it was that price: $2.850 million 697 days ago. Knocking $500,000 off that plus, maybe, a bit more in these final negotiations made it much more attractive. Someone is going to enjoy living here and will be getting it at a decent (a “merry?”) price.

And here’s something to chew on along with your bagel

The birthplace of democracy has a vision to share

While private sector productivity rises, governments and higher education bureaucracies are going the other way.Twice as many firemen responding to half as many fires, and that’s just the beginning.

In the University of California system, the number of senior administrators has grown four times faster than the number of teachers since 1993—to the point where the ratio is now one-to-one. Remember the Ross Perot joke about the USDA employee weeping at his desk because “his farmer died”?

In 2008, a New York Times investigation found that 98% of retiring LIRR workers (many of them at age 50, after 20 years of service) immediately applied for and received disability benefits from the federal Railroad Retirement Board.

Two dozen [out of 1,500 fraudsters] have been indicted in the scam, including two doctors.

The number of employed Americans grew by 316,000 during the first 41 months of the Obama presidency. The number receiving Social Security disability benefits grew by 1,291,000.

Here’s a glimmer of hope

Railroad cars retrieved from storage as lumber, auto shipments increase. Doesn’t say too much either way about Greenwich housing, but I have noticed an increasing number of new housing starts around town, the latest being that lot on Hearthstone that’s been mothballed for the past 3-4 years.

I’m a little surprised, by the way, that we haven’t seen a resurgence in home remodeling by smaller builders, because there’s definitely a demand for less expensive homes that have modern amenities. I’d guess the smaller guys are still locked away from credit, but that’s just a guess – maybe they all went under in the recession and their replacements haven’t figured out that it’s time to leave their jobs and strike out on their own, or perhaps the economics (purchase price, cost of renovation, sales price) still aren’t right.

Standards must be kept, even with a letter of recommendation from Democrat Majority Leader Byrd

Sikh temple killer’s application to join the KKK was rejected.

Here’s a dream house, but unfortunately it’s near Hartford (and asks $19 million)

Way down yonder in the Indian Nation

In 1987, Konover and his family, who were living on Deercliff Road in Avon, learned that a 115-acre spread atop Talcott Mountain, the highest point in Avon, was for sale. Known as Montevideo, the sprawling estate spanned two towns: nearly 87 acres in Avon and 28 acres in Bloomfield. Built for arts patron Daniel Wadsworth, the compound included three cottages, two of which date from the 19th century, three Victorian-era horse barns and a 12-acre lake.

Montevideo can’t be glimpsed from Route 44, but its ridgelines and forests can be seen in several 19th-century paintings by Thomas Cole and John Trumbull, two of the Hudson River Valley School’s most famous artists. Cole, a frequent visitor to Wadsworth’s estate, described the many happy hours he spent there enjoying Montevideo’s sunsets and “shaded rambles,” in his journals and correspondence.

By the time Konover set eyes on the original house in 1987, designed by Wadsworth and Trumbull in 1809, it had been severely altered. During the second half of the 20th century, the main house had served as a women’s retreat and “the top floor and had been removed and several wings removed,” said Konover, founder of Konover Construction.

But the distressed house was not the selling point.

Konover was smitten by the setting, the views of Litchfield County, the Farmington Valley and the private spring-fed lake, which according to historians was one of Mark Twain’s favorite swimming holes, said Bif Carrington, the a property’s listing agent. Carrington’s sources include the 1983 book, “The Correspondence of Thomas Cole and Daniel Wadsworth,” and the Connecticut Historical Society.

Check out the pictures in the linked-to article. Very nice house. But who has this kind of money in Hartford? I’m not familiar with its business scene but things weren’t booming when I attended school there in the late 70’s and so far as my idle curiosity has observed since, nothing has changed for the better.

Could Avon be considered a weekend vacation spot? Will it support a $19 million cottage? I suspect we’ll have several years to find out.

UPDATE: in 2007, Konover won an appeal of the Avon tax assessor’s valuation of $4.4 million on this place and had his own appraiser’s valuation of $3.1 million substituted therefore. Ironic, but who among us does not like to pay lower taxes? The suit really says  nothing about the actual value (Konover paid $6 million for the land itself in 1987), but offers an interesting view of the disconnect between what a property can be valued at for tax purposes and what it’s really worth. Greenwich back country owners, take notice.

UPDATE: “Bif Carrington” has got to be a stage name.