Where is the Left? 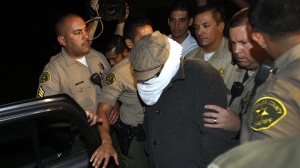 Remember when the Left liked to spell it “AMERIKA”?

Obama sends brownshirts in the dead of night to detain a man who made a video the leader of the free world doesn’t like, and the press and the Left remain silent – “because I did not make a film the administration didn’t like”?

Law Professors, including Glenn Reynolds are howling, but the useful idiots won’t hear. (What follows is the quote he links to):

Here’s the key bit: “Just after midnight Saturday morning, authorities descended on the Cerritos home of the man believed to be the filmmaker behind the anti-Muslim movie that has sparked protests and rioting in the Muslim world.”

By sending — literally — brownshirted enforcers to engage in — literally — a midnight knock at the door of a man for the non-crime of embarrassing the President of the United States and his administration, President Obama violated that oath. You can try to pretty this up (It’s just about possible probation violations! Sure.), or make excuses or draw distinctions, but that’s what’s happened. It is a betrayal of his duties as President, and a disgrace.

He won’t resign, of course. First, the President has the appreciation of free speech that one would expect from a Chicago Machine politician, which is to say, none. Second, he’s not getting any pressure. Indeed, the very press that went crazy over Ari Fleischer’s misrepresented remarks seems far less interested in the actions of an administration that I repeat, literally sent brown-shirted enforcers to launch a midnight knock on a filmmaker’s door.

But Obama’s behavior — and that of his enablers in the press — has laid down a marker for those who are paying attention. By these actions he is, I repeat, unfit to hold office. I hope and expect that the voters will agree in November.

J’s and the trysting masses

Walt suggests he and I head over to J’s and slip roofies into the drinks of young MILTOFs we might admire. It would certainly require a heavy dose of drugs to convince any woman to bed me, but from what I hear, younger men and women are having just a fine time of it over at the bar/hotel -with or without drugs, I can’t say – so much so, in fact, that many aren’t wasting their money on actually, you know, checking in, and are having a boffing good time over behind Maveis Tire, much to the distress of the poor old widow who still maintains a home there. Will October’s chill bring an end to this bad behavior or will the gentlemen stand firm in their determination and persistence? Maybe we can organize a FWIW flashlight tour of the parking lot in a few weeks and see for ourselves.

I never did understand this business

Cuts pensions of retired staffers. “They’re just a bunch of washed-up, greedy old fools who were over-promised too much money by my father,” Times heirette Pinch Sulzberger told Peter Tesei. “Look; if something can’t continue, then it won’t. Scott saw that in Wisconsin and we’re just following his lead.”

Occupy Wall Street is still around – who knew?

Well one poor woman does, now. Didn’t Dollar Bill and his ilk vow that these degenerates were just the start of a permanent revolution?

Cops arrested the Occupy Wall Street protester wanted for allegedly raping a 56-year-old woman at the South Street Seaport and throwing her over a second-story railing last Monday.

Jackie Barcliff, 44, turned himself in yesterday afternoon and was arrested and charged with rape and attempted murder for the Sept. 10 attack, which left his victim with a shattered pelvis.

The homeless man, who told his victim his name was Bless, was also charged with the rape of a 14-year-old girl last August in Manhattan.

Why do they hate him?

Anti-US mobs on the rampage around the globe.

Darwin reaches out from the grave

22-year-old man points gun at head and pulls trigger to demonstrate that it’s unloaded. It wasn’t. Of course it’s a horrible tragedy: the kid’s friends are devastated, he himself was cut up about it, but I’m annoyed at him for adding to the “gun death” statistics. Stupid acts can have fatal consequences and there’s no pulling back a bullet. Teach your kids how to safely handle a gun. While you’re at it, teach them to swim – they’re five times more likely to drown than be shot accidentally.

You’re read all about this in the papers, no doubt, just as it’s led off every evening newscast. Oh, it hasn’t? Well, podna, that’s because it ain’t that ol’ debbil Bush in charge now, is it?

But they sure did love pointing out those prices back when they were half what they are now. (Warning: Debbie Wasserman appearance)