With the seventh and deciding game of the World Series scheduled and Monday Night Football soaking up the rest of the male viewers, the only ones left to watch a debate on foreign policy will be women, and we all know they couldn’t care less about such weighty matters and vote only as their vaginas dictate, so Obama has left Boca Raton and returned to Washington, where he’ll spend the evening in his pink PJs, friending folks on Emily’s List.
So I’ll just relax and watch my Red Sox. Go Yaz!

Are global warming skeptics next?

Back to the future

An Italian court convicted seven scientists and experts of manslaughter on Monday for failing to adequately warn citizens before an earthquake struck central Italy in 2009, killing more than 300 people.

The court in L’Aquila also sentenced the defendants to six years in prison. Each one is a member of the national Great Risks Commission.

Scientists worldwide had decried the trial as ridiculous, contending that science has no reliable way of predicting earthquakes.

Among those convicted were some of Italy’s most prominent and internationally respected seismologists and geological experts, including Enzo Boschi, former head of the national Institute of Geophysics and Volcanology.

`’I am dejected, desperate,” Boschi said after the verdict. `’I thought I would have been acquitted. I still don’t understand what I was convicted of.”

Yes, this is Italy, home of burros, chianti and primitives, but in the eyes of many, Italy is a modern country, with access to scientific reason. There was a time not so long ago  when a voodoo verdict like this, by a judge, not a jury of fifth generation in-breds, by the way, would have been thought to be impossible. There was a time.

This should reassure many Greenwich home sellers

1968. Nixon was elected and Woodstock and the Moon landing were a year away.

There’s still a market for 1968 houses, as evidenced by today’s report of 73 Baldwin Farms S. fetching $2.975 million. That’s far more than bare land would go for, so someone was, gasp!, willing to live in this very nice house on good land, as is.

Four more beers and maybe it will all make sense

Billions and billions of jobs, coming up!

Filmmaker blamed by Obama for causing the death of Americans in Libya still detained, next court hearing scheduled three days after election.

Nakoula Basseley Nakoula, the 55-year-old filmmaker responsible for the anti-Muslim video that President Barack Obama, Secretary of State Hillary Clinton, and U.N. Ambassador Susan Rice initially and wrongly blamed for inciting the deadly terrorist attack on the U.S. diplomatic mission in Benghazi, is still being held at the Los Angeles Metropolitan Detention Center (MDC) without bond.

Pussy Riot members sent to Siberian gulag to serve out their terms.

Two members of the anti-Kremlin punk band Pussy Riot have been sent to remote prison camps to serve their sentences, the group has said.

Maria Alyokhina, 24, will serve the rest of her two-year term at a women’s prison camp in Perm, a Siberian region notorious for hosting some of the Soviet Union’s harshest camps. Nadezhda Tolokonnikova, 22, has been sent to Mordovia, a region that also hosts a high number of prisons.

“These are the harshest camps of all the possible choices,” the band said via its Twitter account on Monday.

Alyokhina and Tolokonnikova were convicted of hooliganism motivated by religious hatred for performing an anti-Putin “punk anthem” in a Moscow cathedral in February. They argued that their conviction was part of a growing crackdown on free speech and political activism inRussia.

Who knew he was still around?

Dan Rather warns that GOP is going to steal the election.

There’s a hole in this argument

Both have wrung their hands publicly the past few days, bemoaning Republican Scott Frantz’s denounciation of “social justice”  a term that, as defined today, has nothing to do with the principles on which this country was founded.

Frantz: “The Democrats: How fundamentally un-American of them to push for concepts such as social justice. “I’d like to coin what I think might be a new term tonight and that is opportunity justice. That is fundamentally American.”

These words sent Greenwich Democrats aflutter because someone has criticized and exposed their primary goal:

“Social justice is what ended the poll tax”, Fudrucker moaned, “and moved Rosey Grier from the back of the bus. Frantz’s cold hearted callousness, his indifference to bigotry and yea, even slavery itself, disqualifies him from holding public office”. [note from his business partner  and Dan Rather – this is a rough paraphrasing of his histrionic comments]

He did not call the concept of social justice un-American. He labeled all Democrats un-American for advocating the idea. In this era when every politician has to wear an American flag lapel pin or run the risk of being called un-patriotic, our state senator’s painting his political opponents as un-American was an abrupt departure from his normally civil campaign style.

While I might amend Horton’s interpretation of Frantz’s remarks to a condemnation of all Democrats who advocate radical social justice, I suppose these days, the one includes the other. What it does not include or refer to is the concept of social justice Malloy, Fudcuker and Horton claim to treasure: compulsory union membership, rural electrification and the Hoover Dam: the term “social justice” has an entirely different meaning than that which our local Democrats pretend to understand  (and which I think they do).

Here’s what an academic liberal blog has to say on the subject.

The very term of “Social Justice” was first expressed in 1840 by a Sicilian priest.  The concept and the need for social responsibilities existed long before but as in all of history, a label and definition was necessary to fully express the issue….

Eventually Social Justice was a label used to plead social reform for peasants who were displaced or uprooted and whom became the urban workers….

It’s about benefiting society’s collective interests, human rights, social equality and providing equal resources to the foundation of what it means to not only be alive but to progress both socially, intellectually and monetarily for and by free individuals.

Social equality and justice for all has evolved and the definition, terms surrounding the very thought or notion have adapted to accommodate the past and the present.  John Rawls is a well known moral political philosopher who wrote the 1971 “A Theory of Social Justice” and presented us with this quote:

Each person possesses an inviolability founded on justice that even the welfare of society as a whole cannot override.  For this reason justice denies that the loss of freedom for some is made right by a greater good shared by others”

Another section of that same blog discusses eduction:

Home life?  How can that be, parents are teaching children the same values are they not?  Lead by example is a coined phrase that parents tend to stick to.  However, parents may be neglecting the race social justice issues while conversing with their children.  Choosing the easy way out and describing all races as equals isn’t enough.  Children need to understand from their parents that all people are created equal.  Social equality can begin in an education system but it has to be followed through at home, with the parents.

Does that sound like an endorsement of the abolishment of the poll tax to you? I’ll bet even Frankie doesn’t think so.

Not that you’d want to waste your time, but a quick Googling of the term “Social Justice” turns up page after page of what Scott Frantz was talking about and what Governor Malloy and his Greenwich Democrats are talking about: 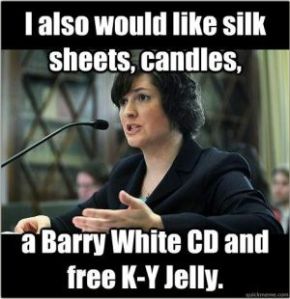