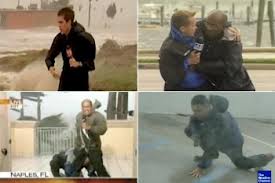 Watching television for its hurricane coverage offers a fascinating view of how the media manipulates its viewers. There’s Jim Cantore, speaking to some “expert” in a secure, undisclosed location who is opining on his opinion of surge height. The damn fool won’t get with the game until Cantore presses: “so you’re saying we can expect catastrophic damage?” Well he hadn’t until then but understanding that you don’t get on TV unless you cooperate, the man readily agreed: “Oh yes – people coming back on Tuesday won’t recognize the beaches they left just Sunday”. Only in media land is beach erosion a “catastrophe”, but that term clearly has a different meaning when used by wannabe meteorologist reporters.

And I’m enjoying the shots of anchor women (the phenomenon seems limited to women) who listen intently to what a colleague is saying and then turn to face the camera and nod their head, as though vouching for the accuracy of what the talking baboon next to her has just said. Fun stuff.

Another thing I noticed, and something that must drive TV producers nuts, are the stupid civilians who ruin dramatic shots of “deserted ghost towns” whose residents are supposed to have all fled – they come back just as the cameras roll, dressed in flip flops and shorts or even jogging outfits and get between the intrepid reporter and the raging sea and really crapping up the whole image of men and women braving the elements to bring us the truth.

Then there are the constant comparisons to last year’s hurricane, Irene, which was hardly a hurricane at all, and only Irene. Is this because the producers don’t trust their viewers to have memories that extend back more than a year or because comparing a real storm to a baby one is more dramatic? I’m guessing it’s door number two.

And I just saw some guy who, in the midst of his reporting on the cruel sea took care to note for his viewers that he wasn’t trampling the sea grass – I kid you not – so as to preserve the dunes from human damage and, presumably, let the waves ruin them instead.

11 responses to “An educational experience”