Maybe they could start over in Cos Cob?

West Virginia senator upset with MTV for filming a “reality” show in his home state that depicts his voters as dumb hicks.

The senator … said the show plays to ‘ugly, inaccurate stereotypes’ about the people of his home state.

The program is due to begin on January 3 in the slot previously occupied by Jersey Shore.

Give the people of West Virginia this: they know how to make an above-ground swimming pool and they know the difference between a pickup and a dump truck, a distinction The Daily Mail editors can’t seem to fathom. 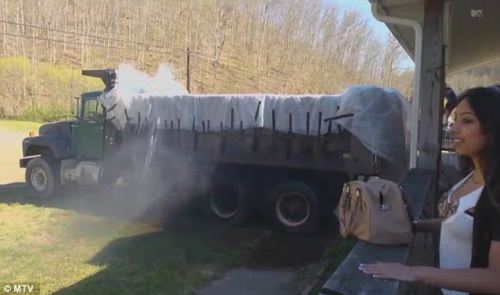 ‘Travesty’: Buckwild features a scene where a pickup truck is used a swimming pool

Don we now our gay apparel ….

Via Fudrucker, who reads Slate for me so that I don’t have to, comes news that Liberals are now going hunting.

Hunting is undeniably in vogue among the bearded, bicycle-riding, locavore set. The new trend might even be partly behind a recent 9 percent increase from 2006 to 2011 in the number of hunters in the United States after years of decline. Many of these new hunters are taking up the activity for ethical and environmental reasons.

“It feels more responsible and ecologically sound to eat an animal that was raised wild and natural in my local habitat than to eat a cow that was fattened up on grain or even hay, which is inevitably harvested with fuel-hungry machines,” writes Christie Aschwanden, a self-described “tree-hugging former vegetarian.”

Of course, I spotted this trend as long ago as 2009 but then, who’s King of Fashion if not I? I’ve told my children that if they’ll wear what they like, do what they like and live long enough, they’ll cycle in and out of style at least a half-dozen times in their lifetime. Tennis, anyone?

Hmm – hates Americans, wants US troops out of Korea and urges his audience to kill Americans? Then bring this man to the president’s Christmas party!

I have no idea what this man is so angry about or why he believes the proper way to express that anger is to drop trou, but …

South Korean who lived in America just long enough to learn to hate us scheduled to appear at the White House. In fairness to our Rapper in Chief, I’m certain that had they known of this kimchi-eater’s views, Obama’s political advisers would never have let him invite the psycho to a public party, no matter how much the First Family wanted to hear him, but it’s not too late to rescind that invitation and maybe deport him to North Korea, where he can spit on Americans from the safety of the DMZ.

It turns out PSY has been involved in several anti-American protest performances. According to Mediaite.com he smashed a model U.S. tank while onstage in 2002 to oppose 37,000 U.S. troops that descended on the Korean Peninsula.

PSY is slated to perform for President Obama for a Christmas In Washington special to air on TNT Friday, December 21.

UPDATE: Ann Coulter suggests, and you know it’s true, that if he’d said the same things about Gay americans he’d be toast. And now the man himself has “apologized, saying “I’m deeply sorry for how these lyrics could be interpreted”. Ah, did we lose something in translation? I don’t think so.

♫ ♬ “Springtime, for Hassan, and Brotherhood …”

“They are not violent by nature, and they have over the last couple of decades evolved more and more into a moderate — conservative but religious, but moderate — regular old political force”, he just reassured his radio audience. How nice of him to do so.

The Duranty Award is named after the New York Times reporter who for fourteen years whitewashed the murderous events transpiring in the new Soviet Union, including Stalin’s show trials, purges, gulags and most famously, the deliberate starvation of 12 million peasants in Ukraine. The Times readers ate that up, the paper won a Pulitzer and the kulaks died. The Times refuses to this date to return the prize although it has conceded that Duranty’s work comprised “some of the worst reporting in the 20th Century”.

This year’s inaugural Duranty Award was given to Vogue’s editor Ana Wintour for her magazine’s glowing portrait of Assad and his clever, cultural wife. Here’s a snippet from the awards ceremony:

“[The choice for the top prize was perhaps a predictable one, but no less superb for it. Claudia Rosett described the ‘combined feats of on-site reporting, headline packaging, impeccable timing, and fearless dismissal of the truth in Vogue magazine’s astounding March 2011 cover story, “Asma al-Assad: A Rose in the Desert,’” the joint responsibility of editor Anna Wintour and writer Joan Juliet Buck.’

Rosett regaled the audience with Buck’s mendacious and mellifluous account of “the freshest and most magnetic of first ladies . . . breezy, conspiratorial, and fun . . . a thin long-limbed beauty with a trained analytic mind who dresses with cunning understatement.” Rosett explained:

In the Duranty tradition, Ms. Buck did not completely ignore the troubling aspects of Assad’s regime. Much as Duranty in his day reported that Ukrainians, then starving to death under communist rule, had “shortages,” Ms. Buck noted that in modern Syria, the “shadow zones” were “dark and deep.” Observing that Syria, when she went there in late 2010, had a reputation as the safest country in the Middle East, Ms. Buck speculated this was “possibly” due to the pervasive state surveillance. The Assad regime’s resident terrorists she stitched into her story as a dash of color: there were Hezbollah souvenir ashtrays in the souk, and you could “spot the Hamas leadership racing through the bar of the Four Seasons.”

But all that, implied Ms. Buck, might be changing under the rule of the vibrant, open, glamorous, caring, wildly democratic, and ever-so-chic Assads.

And so it goes. Ms. Wintour is rumored to be Barack Husein Obama’s choice for U.S. Ambassador to Great Britain and Kirpatrick and his employer are obviously miffed: “Anything she can do we can do better”, Arthur Pinch Sulzberger fumed at a recent press conference denouncing Wintour’s award: ‘it was our goddamned idea in the first place!”. David Kirpatrick has been assigned the task to reclaim the Time’s glory and he’s off to a rousing start although, typical of the Times, he’s cheating by leaving the blocks before the starting gun has fired.