This might finally stamp paid to warmists’ claims about our environment

Just two days into the year and we’re already experiencing the coldest temperatures since January, 2012. If you see Al Gore, tell him to shut up.

America, you can sleep soundly now 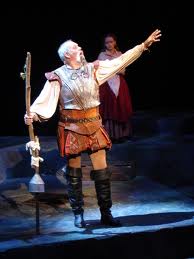 When dreams collide with reality, the idiots keep dreaming

ObamaKare: employers must offer health insurance coverage to children of workers but whether those workers can actually afford to purchase it need be of no concern. This may explain why the “Affordable Health Care Act” has now been renamed “Climate Change”. 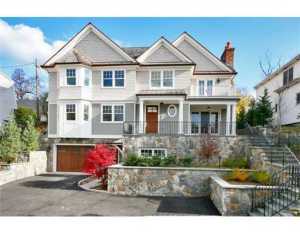 The two condo units, 53 Locust Street #A and #B, are reported under contract, asking price $1.399 each. I don’t know what final selling price will be because these are being sold either to or by the lender. Originally priced at $2.199 per unit, the project was put up by a really good builder with awful timing back in late 2007, early 2008. The downtown market curled up and died just then and so did this building. I thought they represented good value at their last price but they had to be sold together and I had no one around who wanted central Greenwich and had the money to buy two. One, but not two. Darn.

Another contract that came in late New Year’s morning 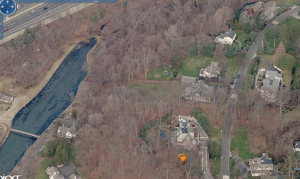 37 Meadow Wood Drive, Belle Haven, asking $5.490, reduced from its year-ago price of $6.650 million. Interesting history on this property – it sold “direct” for $5.950 million in 2002, which proved a boon for the seller, because when those buyers exposed it to the real market in 2004 they had to price it at $5.3 million and finally sold it for just $4. We don’t know yet what it’s selling for this time, but it will probably be for more than that 2004 price, because the owners appear to have sunk a lot of money into it. That doesn’t always mean anything, of course, but ….

This is to my mind a pretty typical Belle Haven house, decorated in that Greenwich Awful look and enveloped by the noise of the Thruway to drown out the unpleasant whining of petulant, spoiled grandchildren. That’s a popular combination on the peninsula, though I don’t know why.

If you waited to enter your company’s marketing effort in the 2012 worst ad of the year contest, you’re too late.

A firm from France won it. There’s bound to be another contest this year, though, so get going. 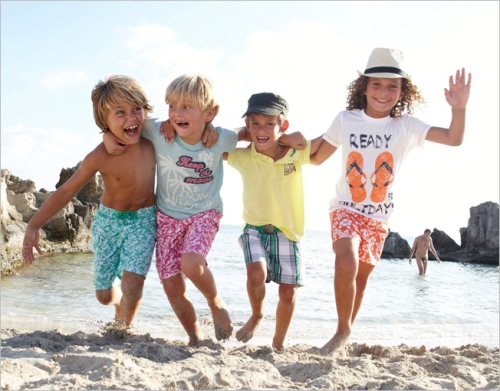 To be honest, I don’t even remember what this was supposed to be about – children’s clothing? Actual ad.

A client of mine alerted me to the reported contract on 8 Durkin Place this morning and I’m frustrated I couldn’t sell it. Durkin’s a little cul de sac off of Linwood in Riverside, parallel to Lockwood Road, and mostly unknown – I grew up not far around the corner and I still had to use a map to find it on its first open house. This was an excellent deal, I think, because the house itself, while definitely needing some serious updating, is a good solid structure that could be made to work. I’d blow out the kitchen, chop off an unfortunate addition in the rear and reconfigure the upstairs and baths, etc., but at an asking price of $1.345, and 0.37 acres of good, flat land in the R-7 zone, there was plenty of room to put that kind of money into it and still be confident that you weren’t overbuilding for the neighborhood. This is going solely for the value of its land, and offers another example of perfectly good houses being given away – but not the dirt they sit on.

The client who saw the contract reported also saw the merits of this deal but it was just a tad out of his reach. A builder client I urged to look at the property never responded (yeah, you know who you are, chump) and other clients I’ve been working with don’t want a project. But someone did, and he’s done well snagging this one.

8 Indian Point Lane, Riverside, $2.350 million. That’s a steep drop from the $4.795 million estimated as its value 428 days ago (Have I mentioned that there is a very low, even non-existent entry barrier to this “profession”?) but seems just about right to me. This is a nothing-special house, dated, and most of its 1.5 acres is under the salt water pond you see in the background, but at this price the buyer can just live in it as is and be on a great street in a nice area for what in Riverside passes for not a lot of money. My favorite part of the agent-to-agent notes? “Early closing possible”. Ooops.

47 Indian Field Road, a 1900 home converted to multi=family and neglected ever since sold for $928,000. Rents being what they are these days, I suppose the new owner can do nothing to the building and collect a decent return. And when it falls down and he must rebuild, he’ll have a large lot on which to do so.

Having shaken off the worst affects of a week of debauchery and determined to get at least a smidgen of work done before they close shop again for Martin Luther Kingdom Day (s), the staff at the Greenwich Association of Realtors straggled into the office this morning and have posted reports of a few real estate transactions that snuck in just under the new year’s tax increases.

23 Chieftans, asked $3.250 million, down from its 2005 asking price of $4.250 and below its various other suggested prices in the intervening years. Owners paid $3.050 for it in 2003 and they may end up close to that number now. The allure of the Chieftans development has always eluded me, but some folks obviously like it.

128 Riverside Avenue is now at $995,000 (sold for $775 in 2001). Cute house, but tiny, with just one bathroom to serve all three “bedrooms” – two and a closet, actually – and even that bathroom, though updated, retains its 1929 size and layout. Perfect for a childless couple but if your family plans envision more than a cat or two, this may be too small for your purposes. I assume that if it were possible to expand this house someone already would have, so you probably shouldn’t plan on doing anything ambitious here. 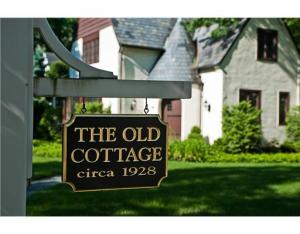 UPDATE: Brother Anthony points out that this house (Anthony calls it “Stockbroker Tudor”) was a mere forty years old when we were growing up down the street and no one considered it then to be an “Old Cottage”. Perhaps this new signage is an attempt by the listing agent to make up for the prohibition against tasteful Realtor signs?

In the land of Ghandi, a growing gun ownership movement 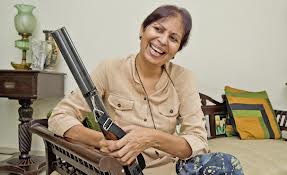 Put this in your mailbox, Janet

Indian women are no longer content to turn their cheeks in the face of increasing violence against them.

When Dr Harveen Kaur Sidhu travels from her home in an upmarket neighbourhood of the north-western Indian city of Chandigarh, she always slips her lightweight .22 revolver in her bag. The gun is a new purchase – Sidhu got her licence only a year ago – but now the 33-year-old dentist won’t travel without it.

“I don’t have faith in the police to protect me. There are so many attacks on women these days. It’s everybody’s right to defend themselves. I think all women who are vulnerable should be carrying guns,” Sidhu said. She is not alone. A growing number of well-off, educated Indian women are turning to firearms for protection.

The trend is part of a broader growth of gun culture in the land once known for the non-violent principles of Mahatma Gandhi.

There are estimated to be 40m guns in India, the second highest number in the world after the US. Licences are hard to obtain and most are illegal weapons, many manufactured in backstreet workshops. Ownership levels per capita remain low – three guns for every 100 people in India – but there is strong anecdotal evidence that middle-class interest in firearms is rising fast.

One sign is the emergence of groups such as the National Association for Gun Rights India, founded in 2009, which lobbies for fewer restrictions on ownership of firearms. “We are not trigger-happy people. We are looking at [using firearms] as a last resort. We see [guns] as a force equaliser,” said Rakshit Sharma, the group’s secretary general.

His group, he said, receives “many inquiries from women who want to know how to obtain a gun and stay within the law”. The trend is strongest in regions where a tradition for firearms is well-established, such as Punjab in the north-west, due to local wealth, a strong martial history and a brutal insurgency that ended only 20 years ago.

The local taste for conspicuous consumption has also boosted sales. “Business is very, very good. Better than it’s ever been,” said Satish Kumar, a gunseller in Chandigarh, the Punjab state capital. “People buy weapons, 10% for security and 90% for status. People will happily spend 80,000 rupees (£9,600) on a foreign-made handgun.”

Kumar said only one in 50 purchases were made by women but the number was rising. Data obtained earlier this year under India’s newRight to Information law revealed that nearly 31,300 arms licences have been issued to women in the Punjab and 31,026 of them have actually purchased arms.

One recent enthusiast is Anita Dhiman Dass, who lives in Ludhiana, a prosperous centre of trade and farming 80 miles west of Chandigarh. Dass, 46, got her first gun three years ago, has three weapons on her licence and says a Ruger .22 pistol is her favourite. “It’s so light. I put it in my bag when I go shopping, to the mall, to the market or wherever. It is very necessary. There is so much robbery these days. They just snatch chains and bangles,” she said.

Like Sidhu, Dass said carrying a gun made her feel secure. Her husband, Ishwar, runs a car dealership in the town. His collection of 11 weapons includes hunting rifles and vintage shotguns. Dass said a four-year-old grandson was now “very fond of guns” and the family’s new puppy has been named “Sniper”.

Navdeep, a housewife in Ludhiana, said she had a shotgun at home for security when her husband was working away from home, and recently bought a lighter pistol for use outside the house. “A lot of lower-class men, they harass women, so a gun is very good way of telling them to back off. If I am coming home late at night on my own, it is very necessary. Even if the police come, it is too late,” she said.

The phenomenon may in part be a response to the failure of the state to inspire confidence among many middle-class Indians, particularly women. Almost all women interviewed by the Guardian said they felt an increased level of threat.

Tagged as Fans of Janet Hasson

Doubling down, Journal News vows to publish a new list of names and addresses 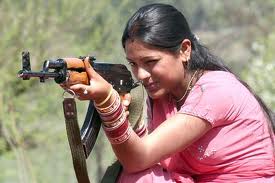 Eschewing the safety provided by a rolled-up copy of the Journal News, Dr. Harveen Sidhu takes matters into her own hands

After bus rape, Indian women rush to get gun permits and Journal News publisher Janet Hassan is not amused. “No one individual has the right to defend herself” Hasson insisted at a news conference this morning, speaking from behind a plexiglass bullet screen and  flanked by members of the Hudson Valley Assault Rifle and Marching Band, “and so we will expose these depraved women for the danger that they are. Besides, human actors don’t cause crime, inanimate objects such as guns and rape-provoking clothing do. Get rid of that stuff and we’ll all be safe.” 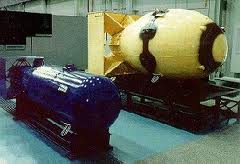 Taxation for all who aren’t friends of the Royal Court