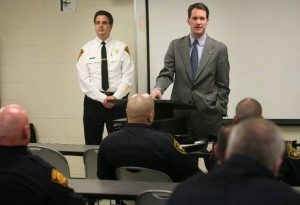 Jim Himes turns us over to the care of Officer Friendly

Why do leftists want assault weapons in the hands of policemen, but not by those whom the police control?

From an essay by  Joseph Farah, “When did the left fall out of love with guns?” :

Yes, the left still loves guns.  There is no other reason for the fawning acceptance of the vulgar SWAT raid tactics in which innocent men like Mr. Eurie Stamps get shot and killed.  These tactics are repeated all across America every day.

The left just doesn’t love guns in the wrong hands, and anyone who isn’t an agent of the state is the wrong hands.  Listen to Representative Jim Hines  [sic] (D – CT) tell you why high capacity magazines are still necessary in government hands.

There is absolutely no justification for weapons that were made for the explicit purpose of killing lots of people quickly to be in the hands of civilians.

Let that wash over you again.  “Killing lots of people quickly” and “civilian hands.”  The two don’t go together.

Leftists are by nature not liberals, no matter what label they have adopted.  Scratch a liberal, and find a Fascist.”

Tagged as Gun control at any cost, Jim Himes

7 responses to “Interesting perspective from Cos Cob Congressman Jim Himes”