Extraordinary Unpopular Dilutions and the Madness of Clowns

Demand for your product exceeds manufacturing capacity? Reduce the demand by degrading the product. Pure genius, and an approach that reeks of a week spent among the barrels, sampling the wares. Maker’s Mark will water down its whiskey 6.7%  “to meet rising demand”. I’m no bourbon drinker but I’d think that as the water content goes up the demand will come down and the two will reach equilibrium, however briefly, sooner than Maker’s Mark may wish.

Service entrance in the rear

Same story I linked to last week but now the mainstream press has picked it up, and San Francisco Chronicle’s Debra Saunders isn’t impressed with her idiot neighbors: the ban on plastic grocery bags is making people sick.  Two items of note – first, the study examined the health of residents of San Francisco and apologists for the ban say that it’s unfair to blame the bags for the bugs their resident population of fudge packers pick up in their intestinal system. I’m not making this up – here’s the exact quote:

If the professors had consulted with an epidemiologist, they would have understood how the city’s unique demographics contribute to specific intestinal issues.

Er, ..eewww? Second, remember those energy savings? Here’s how advocates of the cloth bags say to take care of them:

Designate specific bags for meats and fish. Wash these bags regularly – preferably after each shopping trip – to get rid of bacteria. If your bag is fabric, toss it in the washing machine with jeans, and if it’s a plastic material, let it soak in a basin filled with soapy water and either the juice of half a lemon or about a quarter cup of vinegar.

Does that sound like saving energy saving to you? How you heating that wash water, thunder brains?

Ask your friends and family how many of them regularly wash their reusable bags – ask how many folks ever have done any of the above steps – and you can intuit that a ban on plastic bags might not be the brightest idea.

California politicians didn’t even bother studying the possible health effects of their anti-bag laws. They were in such a hurry to tell their constituents what’s best for them, they forgot to check how their busybody scheme might go wrong.

Other things wrong with the ban

— It’s another nanny state law that coerces law-abiding shoppers to change their conduct.

— Single-use bags are not the problem. In 2011, they represented 0.13 percent of California’s total waste stream.

— According to the British Environment Agency, consumers have to reuse a cloth bag 131 times to present lesser global warming impact than conventional bags.

And washing them wears them out.

I don’t know where’d I’d keep it or what I’d do with it, but I want one

Dutchman invents brick laying machine – is this cool or what?

Brick roads have long been sought-after due to their attractiveness and durability but have become less common because of the labour-intensive work that goes into laying them, compared to other road surfaces such as concrete or asphalt.

However, with a Tiger-Stone workers are able to lay out 400 square metres of new road every day, using paving stones or bricks, compared to a single conventional paver on their hands and knees who would only be able to manage between 75 and 100 square metres.

The amazing machine, named Tiger-Stone, can create an instant road wherever it travels, laying out bricks in formation to create perfect paving.

While the process may look magical, the secret behind the invention lies in a smartly-designed gravity-based system.

The machine is the brainchild of Henk van Kuijk, director of Dutch industrial company Vanku, who came up with his ground-breaking invention after deciding that squatting or kneeling down to place the bricks into the ground by hand was too much like hard work.

The device, which is as wide as a road and comes in four, five and six-metre widths, is fed loose bricks and lays them out onto the road as it slowly moves along.

The tread-tracked machine is electrically-powered, and has few moving parts, so noise and maintenance are kept to a minimum.

Once the bricks are in place, all a contractor has to do is go over the new road surface with a tamper, and the new highway is complete.

Probably not quite as much fun as a snow blower, but close

Don’t let the brat get way!

London Mother’s hysterical screams as fox gnaws off her baby’s finger alarm, upset neighbors. Whilst some observers think that this might be time to consider resuming fox hunting on a limited scale (tough to do when even sharp scissors are banned over there) the Royal Society for the Prevention of Cruelty to Animals blames the mother for her carelessness:

An RSPCA spokeswoman said the only reason a fox would attack is due to fear.

“It’s extremely unusual for foxes to attack young children or anyone,” she said.

“It’s not typical fox behaviour at all. Foxes will come closer to a house if there are food sources. Then they can become quite bold, but they usually do back off and run away when there’s people around.”

A spokesman for Lewisham Council described the attack as “very tragic but rare” and said there were currently no procedures in place to tackle growing fox numbers in the area.

“Our procedure is to offer advice and trying to help people understand foxes will come through their area and what their natural habitat is,” he said.

“Obviously that doesn’t take away from the terrible things that happen, but it is very rare for a fox to come into a house.

“We will continue to encourage people to realise that keeping gardens and streets free of litter and do all they can to keep that message at the forefront of peoples’ minds.”

UPDATE: The British group trying to restore fox hunting to England is coming our way to solicit funds for the cause. You might say it’s an opportunity to give the finger – a finger, anyway – to the RSPCA

Belle Haven’s Sean Dunne: I was climbing the Jungfrau, damn it!

While the State’s so-called ‘bad bank’ continues to insist that Ms Killilea-Dunne acquired millions of dollars worth of properties in Greenwich,Connecticut, using money provided by her husband, lawyers for Mr Dunne will ask Judge Brassel Mazzaro to throw the case out on the grounds that the courts of Connecticut have no jurisdiction in the matter.

Central to the case, Mr Dunne’s legal team will argue in Connecticut tomorrow, is that neither he or his wife had any residence in or connection to either Connecticut or the United States at the time when Nama alleges he transferred a valuable property in the Swiss city of Geneva to her. The so-called “Geneva transfer” and the proceeds which Nama believes flowed from it form a central plank in the agency’s claim that Ms Killilea-Dunne received millions of dollars from her husband to buy real estate in Connecticut, depriving them of monies he owes them in the process.

Judge Mazzaro will be told how at the time of the Geneva transaction which began in January 2009 and concluded in January 2010, Mr Dunne and Ms Killilea-Dunne were both residents of Switzerland.

This might explain why Mr. Dunne denied ownership of 421 Field Point Road so spiritedly when questioned in 2010 by a Greenwich Time reporter:  little Jimmy Olsen was screwing up Dunne’s legal defense.

Dunne vehemently denied ownership of the property during a testy exchange with a reporter and photographer Wednesday outside 421 Field Point Road, a $7 million Mediterranean-style villa where town records show him living and neighbors say he is currently renting. “Not on my property, sir,” Dunne said when confronted about the demolition work. “I can only account for my own actions.”

But Dunne’s home address is listed as 38 Bush Ave. with the secretary of the state’s office, where his real estate development firm Mountbrook USA is on file with the commercial recording division as a limited liability company.

Reached Thursday on his cell phone, Dunne again denied he owned the property, which was purchased for $2 million on April 16 of this year.

“My God, very interesting. Send me all the deeds and we’ll sell the property together,” Dunne said before hanging up the telephone.

At last, an honest Warmist

The World Without Us – thank Gaia!

Preventing global warming will require a “planned for recession.” A depression, more likely, but that will suit the greens just fine.

Adapting to climate change could have profound repercussions across all parts of society, Professor Kevin Anderson told a Stormont meeting. His talk was organised by Friends of the Earth.

Professor Anderson said: “Whilst orthodox expertise maintains two degrees centigrade is not only possible but achievable without sacrificing the benefits of economic growth and rising prosperity, it is difficult to envisage anything other than a planned economic recession being compatible with two, three and increasingly four degrees centigrade futures.”

He said such a fundamental transition left several clear choices.

“To continue the delusion that climate change can be addressed adequately through rhetoric, financial fine-tuning and piecemeal incrementalism; to interpret such conclusions as a message of despair and futility; or to acknowledge that at every level the greatest obstacle to transforming the world is that we lack the clarity and imagination to conceive that it could be different, and that through immediate harnessing of human will and ingenuity we can yet deliver relatively low-carbon and climate-resilient communities.”

The academic is Professor of Energy and Climate Change at the University of Manchester and deputy director at the Tyndall Centre for Climate Change Research.

According to the university`s website, his research on carbon budgets (five-year restrictions on greenhouse gas emissions) has been pivotal in revealing a widening gulf between political rhetoric on climate change and the reality of rapidly escalating emissions.

“His work makes clear that there is now little to no chance of maintaining the rise in global mean surface temperature at below 2C, despite repeated high-level statements to the contrary,” it added.

“Moreover, Kevin`s research demonstrates how avoiding even a 4C rise demands a radical reframing of both the climate change agenda and the economic characterisation of contemporary society.”

This is a “Friends  of the Earth” greener speaking, mind you, not your crazy blogger who’s been saying this for years. They may love the earth but they hate humanity. All aboard the train to oblivion.

The science is settled: news anchors are as stupid as their audience 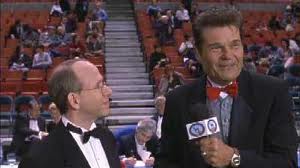 Doctor, question that’s always bothered me and a lot of people: Mayflower, combined with Philadelphia – a no-brainer, right? Cause this is where the Mayflower landed. Not so. It turns out Columbus actually set foot somewhere down in the West Indies. Little known fact.

CNN anchoress: Are astroids another sign of global warming?

Is nothing sacred (ground)? 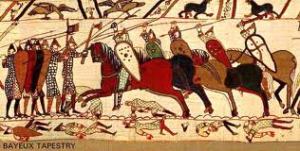 Historians: Battle of Hastings may have occurred two miles further east than was thought. Hey – it’s only been 947 years – give’em time to get it right. As the last battle of the last war the French* won, you don’t want to make a careless error in location.

* Okay, they were Vikings, but they sailed from France and given the sorry story of French military prowess, that’ll have to do.