Ah, the joys of peddling dirt 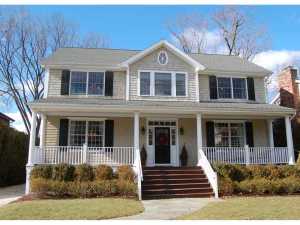 11 Park Avenue, Old Greenwich, asking $2.395, reported an accepted offer this week, and while I was glad to see the owners finally get out from under a house they no longer want, I felt bad for the original listing agent, who spent years – 2008 – 2012 with this listing and this owner, only to have the listing yanked away from her and given to another agent. That agent, of course, reaped the benefits of yet another price cut and an improving market when it sold after just 148 days of her involvement.

The owners paid $1.960 for this house in 2005, which probably wasn’t nuts, but then listed it again in 2008 for $2.895. They may have made some improvements, but nothing they could add, no matter how expensive, would make (this) Park Avenue a $3 million address. But the broker who’d sold it to them in the first place took the listing at that price, with the result described above.

That was her choice, of course, but her sorry fate: countless hours, days and weekends sucked into the house with absolutely no compensation at the end is typical for agents with overpriced listings. So typical, in fact, that I refuse to take them on. I’d rather be fishing, or visiting my friend Dr. Ernie Whittle down the street for a quick root canal.

Another blogger (ahem) counts 34, but my tally of the MLS sheet for the week shows 36, with 16 of those being rentals, out of town properties and condominiums. I don’t dispute that living quarters are living quarters, but if you’re wondering how the single family home market is doing, the number to use is twenty.

Our MLS records don’t seem to permit me to search for accepted offers in past years, but executed contracts are the next best thing, even though they’re a lagging indicator (usually two-to-three weeks behind the accepted offer). Here are those numbers for the third week of March each year – check out 2007-2008 for an example of what a crash looks like.

Obama: “I will single-handedly shut down your economy because I am king of the world”

No more “new” anything.

President Barack Obama is preparing to tell all federal agencies for the first time that they should consider the impact on global warming before approving major projects, from pipelines to highways.

The result could be significant delays for natural gas- export facilities, ports for coal sales to Asia, and even new forest roads, industry lobbyists warn.

“If Congress won’t act soon to protect future generations, I will,” Obama said last month during his State of the Union address. He pledged executive actions “to reduce pollution, prepare our communities for the consequences of climate change, and speed the transition to more sustainable sources of energy.”

While some U.S. agencies already take climate change into account when assessing projects, the new guidelines would apply across-the-board to all federal reviews. Industry lobbyists say they worry that projects could be tied up in lawsuits or administrative delays.

For example, Ambre Energy Ltd. is seeking a permit from the Army Corps of Engineers to build a coal-export facility at the Port of Morrow in Oregon. Under existing rules, officials weighing approval would consider whether ships in the port would foul the water or generate air pollution locally. The Environmental Protection Agency and activist groups say that review should be broadened to account for the greenhouse gases emitted when exported coal is burned in power plants in Asia.

Similar analyses could be made for the oil sands that would be transported in TransCanada Corp)’s Keystone XL pipeline, and leases to drill for oil, gas and coal on federal lands, such as those for Arch Coal Inc. and Peabody Energy Corp.

The White House guidance itself won’t force any projects to be stopped outright. Instead, it’s likely to prompt lawsuits against federal projects on these grounds, and increase the probability that courts will step in and order extensive reviews as part of the “adequate analysis” required in the law, said George Mannina, an attorney at Nossaman LLP in Washington.

While the Obama administration’s guidance could be easily rescinded by the next administration, the court rulings that stem from these cases will live on as precedents, Mannina said.

The next target is TransCanada’s application to build the 1,661-mile Keystone pipeline. The Sierra Club and 350.org drew 35,000 people to Washington last month to urge Obama to reject the pipeline. Meanwhile, the NEPA review by the State Department included an initial analysis of carbon released when the tar sands are refined into gasoline and used in vehicles.

It stopped short, however, of saying the project would result in an increase in greenhouse gas emissions. With or without the pipeline, the oil sands will be mined and used as fuel, the report said. That finding is likely to be disputed in court if the Obama administration clears the project.

“Keystone is ground zero,” said Snape, of the Center for Biological Diversity. “Clearly this will come into play, and it will be litigated.”

None of this is unplanned, and the disastrous consequences won’t be “accidental”. These people are determined to return the United States to the stone age and they’re doing that by executive fiat. The optimists on Wall Street should be buying manufacturers of ammunition, not consumer goods.

“I’m all for hiking the minimum wage, except not here” 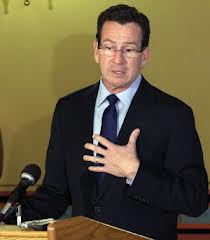 Our dyslexic visiting scholar in Hartford, Governor Dannel Le Petomane , supports hiking the minimum wage but doesn’t support raising it here – not yet, anyway, because our economy sucks.

“I absolutely support the president’s move to raise nationally to $9 and I’m open to discussion about what we should do in Connecticut,” Malloy told reporters.

Over time, the minimum wage “should probably get to $9,” he said.

Organized labor and its allies are pushing for the state legislation. In January, a spokesman for Malloy said the governor was supportive of “the ideals behind the legislation,” but also considered cost pressures facing businesses, particularly in the weak economy. Legislation to raise Connecticut’s minimum wage passed the House of Representatives last year, but failed to come up in the Senate.

Malloy said then he was concerned that raising the minimum wage would hurt business in a fragile economy.

So which is it? Does hiking the minimum wage raise all boats, especially those of organized labor, whose contracts are based on a set percentage over the minimum, or does it harm business and consumers by raising costs and hurt the lowest paid workers by making their labor unaffordable? Dannel says he’s confused, poor guy, but so am I: if boosting the pay for the unskilled and uneducated will make them better off while having no affect on their employability, why screw around, why not bump it to $100 per hour and set them entirely free from the bondage of poverty?

Follow up on the wonderful Obituary Walt passed along yesterday

No, not Walt’s obit, Harry Stamps. Written by his (Harry’s) daughter, it’s gone viral. This links to the article about the obituary, but be sure to read the obituary itself. It’s a treat.

For me, not so much for real estate activity. 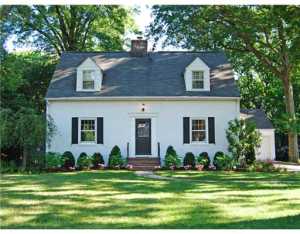 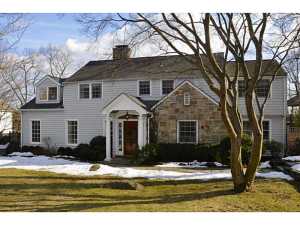 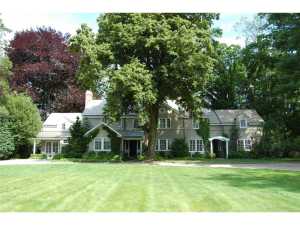 591 Indian Field Road, currently listed for $5.9 million, is under foreclosure, according to Zillow (and no, I’m not disclosing some sad, private dirt – Zillow issues this report daily and many, many buyers subscribe to it – it’s free, and based only on public records). I’ve always liked this house but neither I nor the buying public thought it was worth its 2008 price of $8.9 million and that overpricing has hurt it in the subsequent five years.

But it remains a great older house, and Mead Point is, in my opinion, the most desirable of our gated communities. Very much worth taking a look, if you’re in the $4.5-$5.5 price range.

If history is a guide, it’s just about time to flee stocks

My recollection (you experts can correct me) is that the market has peaked when shoe clerks are buying stocks and bears are throwing in the towel and jumping into the pool. I’ve been overhearing conversations among deli counter workers about their “investments” for months now, just as I did during the dot.com boom, and various bears have been giving up and moving into cash all this week.

A reader sends along this memorandum of decision generated during the discrimination suit brought against Belle Haven and certain individuals.

Why liberals hate guns – they hate the people who own them.  Fair enough; we hate them, and everything they stand for.

Dan Baum, a Jewish liberal who wears turtlenecks but also owns guns, writes in his new book, “Gun Guys,” that firearms in America have long represented “a worldview that, broadly defined, valued the individual over the collective, vigorous outdoorsiness over pallid intellectualism, certainty over questioning.”

Chris Matthews, host of MSNBC’s “Hardball,” asserted that gun rights advocates aren’t “normal people,” they have no “other interests,” and they are uninterested in their wives or kids.

After Sandy Hook, when liberals wrote and spoke about guns and geography, rather than about on poverty-filled cities where gun violence is concentrated, they typically focused on the South. “The South is the most violent region in the United States,” a Washington Post article proclaimed.

Wherever they live, gun owners are unwashed, flag-waving, philistines — at least in the eyes of many liberals.

The Post’s Gene Weingarten in 2011 spat on the Second Amendment as “the refuge of bumpkins and yeehaws who like to think they are protecting their homes against imagined swarthy marauders desperate to steal their flea-bitten sofas from their rotting front porches.”

After Columbine, a Boston Herald op-ed described the average participant in a 1999 Boston Common pro-gun rally as a wannabe “hicksville cowboy, as in way out there, somewhere off the Mass Pike or at the far reaches of 93. From towns with something to prove and lots of Amvets posts.”

And President Obama in 2008 famously told a wealthy crowd at a San Francisco fundraiser that rural voters “get bitter, they cling to guns or religion or antipathy toward people who aren’t like them … ”

Well, the “antipathy toward people who aren’t like them” clearly is mutual.

In “Gun Guys,” Baum — a true-blue liberal — says that what gun control “did best was express disapproval of a lifestyle and the culture that enjoyed it.”

Liberals, Baum writes, “recognized the gun as the sacred totem of the enemy, the embodiment of this abhorrent world view. They believed that they could weaken the enemy by smashing his idols — by banning the gun if possible … ”

Many liberals hate it that some conservatives have a different set of values, morals and aesthetics — and so these liberals want to use the federal government to fix that.

This comes across in the proposed legislation, too. Why do Democratic politicians go after semi-automatic rifles like the AR-15, so-called “assault rifles”? It’s not because AR-15s are used in most killings — they aren’t. Rifles represent 3 percent of all gun deaths where the weapon is known, according to FBI data. The 1994 “assault weapons ban” did little or nothing to save lives.

There are two reasons to target AR-15s, and neither is good. First, “assault weapons” are used in mass killings, which are both more newsworthy and more realistic-seeming to a white suburbanite. Second, AR-15s are, by far, the favorite gun of legal gun buyers.

“Assault rifles,” writes Baum, “were just as powerful symbolically as they were ballistically. A renewed assault-rifle ban would really smash the enemy’s idols.”

Also, when speaking about sales without background checks, gun controllers always refer to “gun shows.” Most guns used in murders aren’t bought at gun shows — they’re stolen or bought on the street. But gun shows are large gatherings of the “gun tribe” — and so they must be shut down.

A modern journalist in the making

Biden staff demands that (accredited) student journalist delete photos from his camera and he meekly obeys. He’s already learned the deference to authority necessary when covering Democrats, and he’s on his way. Probably wanted to go to Brown.