With the Greenwich High Music Hall now estimated to cost $42 million and still climbing, people are rethinking the project. There’s talk of eliminating the orchestra pit, reusing an older portion, and on and on. The end result, it seems to me, will be a dog’s breakfast of old, new and make-do, all so the proponents can claim they built something. That’s a dumb reason to spend what’s probably going to be fifty-million bucks, if we’ll end up with the same inadequacies we’ve been muddling along with these past decades. I say, punt.

About that sale on Bobolink

I’ve written many times of the savage penalty FAR exacts on undersized lots because of its inflexible application of maximum house size; that same inflexibility, however, works to the advantage of owners of large lots, especially for those properties able to accommodate mansions closer-in than the back country.

As claimed by critics and denied by the White House, Homeland Security did indeed release thousands of illegal aliens as part of the sequester fraud, not a handful. That first statement is no longer operative.

WASHINGTON (AP) — The Obama administration contradicted itself Thursday, acknowledging to Congress that it had, in fact, released more than 2,000 illegal immigrants from immigration jails due to budget constraints during three weeks in February. Four deemed especially dangerous have been placed back in jail.

The administration had claimed only a “few hundred immigrants” were released for budgetary reasons, challenging as inaccurate an Associated Press report that 2,000 immigrants had been released and that 3,000 more would be released this month.

However, the director of U.S. Immigration and Customs Enforcement, John Morton, testified Thursday that his agency released 2,228 illegal immigrants for what he called “solely budgetary reasons.”

The AP, citing internal budget documents, reported exclusively on March 1 that the administration had released more than 2,000 illegal immigrants since Feb. 15 and planned to release 3,000 more in March due to looming budget cuts, but Napolitano said days later that the AP’s report was “not really accurate” and that the story had developed “its own mythology.”

“Several hundred are related to sequester, but it wasn’t thousands,” Napolitano said March 4 at a Politico-sponsored event.

Reached for comment, Greenwich Democrat Chairman Francis Fudrucker refused to condemn the latest administration official caught lying. “Hey, it’s not principles, its politics” Fudrucker said, brushing a bit of bagel crumb from his lower lip. “Elections have consequences, and this is one of them: we get to lie to you – get over it.” 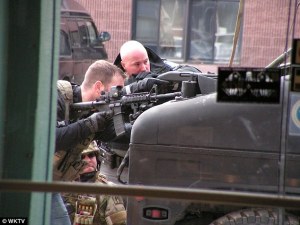 We’re in the best of hands

SWAT team member responds to Herkimer shooting scene geared up and ready to go – too bad his scope is on backwards.

Which means, (a) it’s useless, (b) it isn’t zeroed in, so a bullet could go anywhere, (c) he’s never fired the weapon before, and (d) team members are as clueless as he is.

When seconds count, you’d better hope that your local swat team is hours away.

[Commission Chairman Liddy]: “You know what? Those legal-abiding gun owners, I do feel bad for if we pass this recommendation. But when I try to measure the cost and benefit of such a recommendation, I’m going to err on the side of the safety of those children and those people who are the targets.”

For now, Malloy says he’s opposed to outright confiscation – for now. But do you remember those readers who commented here, claiming that they were only interested in “common sense” restrictions, and dismissing the idea that there was any movement afoot to seize lawfully obtained, lawfully possessed weapons? We knew better, and they did too. It’s all about incremental steps, all leading to ultimate goals, whether it’s the disarming of the citizenry or the destruction of our economy or the conversion of public education into a propaganda factory. All one plan, all one mindset.