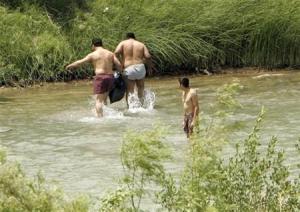 Issue them drivers licenses because God forbid they’re otherwise forced to break a law. Just to set the current picture: in order to buy a .22 rifle or even a box of cartridges- two bucks out of your pocket –  you must now prove that: (a) you are here in this country legally,  (b) that you have no criminal history or any record of being voluntarily treated for depression or other mental disorder; (c) have evidence from the Chief of Police of your hometown, and the state police, and the FBI that a background check has been performed and two letters of recommendation received from persons who know you; and (d) several hundred dollars to pay for background investigations, gun safety courses and fees.

On the the other hand, should you desire to drive a lowrider capable of doing 150 mph, you need merely announce. “My name is José, I’m here to stay!”, and Bob’s your uncle.

They call these people undocumented Democrats for a reason, and we’re handing them our country while we tyrannize real citizens. Only in the People’s New Socialist Haven.

UPDATE: Oops! I forgot to add as requirements for buying that ammo the submission to fingerprinting and mug shots. I was reminded when EOS pointed out this feature of Illinois’ program to license wetbacks:

The Illinois law has a “only a lib would think of this “clause in it: Illinois will not require applicants to be fingerprinted, for fear that would discourage immigrants from applying.