Well, a lawyer and a portfolio manager, what did you expect?

Two Wall Street pond-scum came out to the Hamptons, had an agent recommend, then show them a variety of summer rentals and while they were in the houses, left notes for the owners telling them to skip the agent and call them directly. This to avoid paying a $3,000 commission. I knew things were bad down in the canyons, but really.

Nothing wrong at all with approaching homeowners without using an agent, but if you’re going to use an agent’s time, pay up. These guys probably stiff their cabana boy too.

Anyway, the pair inquired about some high end rental properties promising “all cash for a quick deal,” according to the blog.

We’re told that they were asking about 25 homes in the brokerage firm’s system and an agent worked really hard making calls and arranging tours.

The agent took the two Jons to some houses last Saturday. He felt confident that they would put in an offer.

According to the brokerage, the pair were leaving handwritten notes in the homes telling the homeowners that they would like to do an all cash deal directly with the owner, while cutting out the agents.  Two homeowners found the notes and turned them over to Rosehip Partners, says the firm.

Someone still has money and is willing to spend it 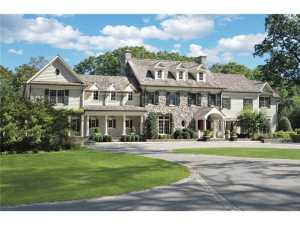 It’s what they voted for

You can believe in this, baby: you’ve been hosed

“Elections have consequences”, Kenyan leader Barack Obama told his adoring college fans, and boy do they: unemployment for those under 25 is 22.9%. Barack’s doing what our colleges couldn’t, or wouldn’t: driving home the hard economic lesson that there’s no free lunch.

“What could I have been thinking?” First Selectman asks as he announces his decision to keep our Central firehouse where it is. “We’ve got a $100 million clean-up bill for the high school, $65 million for the music hall, $35 million for the Byram pool, and I want a new firehouse? I must have been out of my mind – we’re staying put.”

“It’ll take a little bit of effort to bring it back the way it was”, he conceded, “the boys with the crow bars got a little ambitious, but a little dusting, maybe some aluminum siding and we’ll be back in business.” 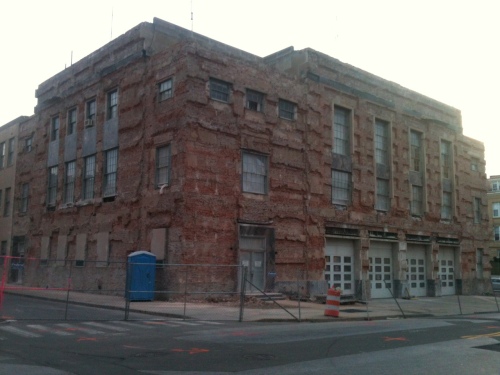 Yes, this is still a real estate blog, or it is when there’s news

Here are three houses that have done something worth mentioning (the GMLS server was down last night so links weren’t working – these should be okay).

32 Copper Beech has an accepted offer. Asking $2.6 million. I wrote about this when it came on, saying that it was a fantastic piece of art that might take some time to find a buyer to appreciate it. My own clients did but it was just outside their price range. But not for someone else, and that’s good to see – nice house, great street.

And 733 Lake Avenue, which sold last December for $4 million even, is back today at $4.795. Perhaps they replaced the single-pane windows with modern ones. I can’t imagine anything else that could have been accomplished in so short a period that would justify an $800,000 increase. 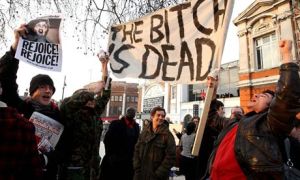 Oops! That didn’t happen; we’re a class act, but liberals in England are holding parties to praise the passing of Margaret Thatcher.

But as tributes poured in from around the world for Britain’s first and only woman prime minister, many on the Left condemned the social impacts of her policies encouraging the free market and stripping power from unions during her 11 years in office.

On Monday night, hundreds of cheering people held parties to “celebrate” her death in Glasgow and Brixton, south London.

My Coffee with Scott 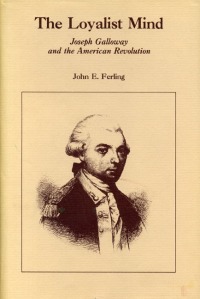 Why won’t they listen?

Scott Frantz and I sat down over coffee yesterday morning to discuss our differences about his role in providing Republican support to the Democrats’ gun control bill. I originally drafted a long report on the meeting but really, it boils down to this: Scott performed an act of legislative triage, jettisoning the rights of non-hunters in order to protect hunters from having their guns confiscated. He demanded many concessions [on proposals that in my opinion had no chance of passage] in exchange for delivering Republican votes and when those were met, he capitulated.

Our disagreement is more than one about strategy – he chose to collaborate, I think he should have engaged in some creative guerrilla war tactics, but there is a principle here, even if Frantz doesn’t see it: you don’t appease the enemy and you don’t negotiate when the other side when there’s bad faith on the other side. You should not, in short, emulate Zbigniew Brzezinski.

Democrats rule this state. The only role Republicans serve is as cover for some of the Democrat’s most egregious acts: sweetheart deals with unions, increased taxes, unfunded budgets and pension plans, state control of local zoning and schools and so on, on and on. As the Democrats themselves admit, they don’t listen to Republicans, let alone accede to their proposals, because they don’t have to. So why do Republicans go along with this meaningless charade?

I read a biography of John Adams this winter, and see a striking similarity between the conservatives at the First Congress  who resisted a break with England and Frantz and his fellow Republicans attempting to negotiate with a band of thugs who don’t need to and thus won’t concede on any issue. For over a year-and-a-half, the “men of reason” in Philadelphia, lead by Joseph Galloway, forestalled a break with England. They insisted on reaching out to King George, again and again, on sending petitions and worthy men over the Atlantic repeatedly,  sure that if the King only knew the truth of the matter he would stop the oppression being inflicted on the colonies in his name. Of course the King was fully aware of what was happening over here – he was directing it, and the petitions went unread, the worthy statesmen unheard. Petitions and reason did no good in 1776 and will do no good now.

As things turned out back then, the firebrands won, beating the largest army in the world by shooting them from trees and never giving up. But there was no way of knowing they’d win when they signed that declaration of independence and each fully expected to be hanged if the war went the other way. They were men of principle, literally willing to have either liberty or death. Our current crop of leaders are the Joseph Galloways of 2013, modernized, but still sure that they can nibble at the edges of the most oppressive of the Democrats’ policies and dictates and keep the game going. Galloway became a loyalist and fled to England. Perhaps our Connecticut Republicans will relocate to Hartford. Will we miss them if they do?

No longer an April Fools joke 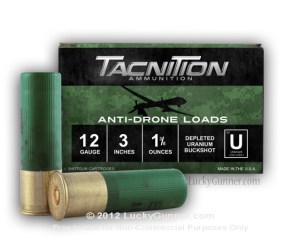 PETA to buy drones to harass hunters. Sounds like it’s time to move from joking to serious.

Obama slams Republicans for engaging in anti-gun reform “stunts” . The man is despicable.

The science is settled

Members of that Mayors Against Gun Owners, the Bloomberg group, are up to 45-times more likely to commit crimes than are gun owners – or in some instance, other gun owners who aren’t mayors.