Push back on the 2nd Amendment

Senator Mike Lee (R.Utah) sets up website for people to recount  their armed resistance to evil.  Here’s one such tale that might resonate with Greenwich residents:

“Jim, from Louisiana, writes as follows,” Lee said in remarks Wednesday on the Senate floor, “‘I lived through the Los Angeles riots. My wife and I were living in Silver Lake. For five days we watched the orange glow of businesses being burned on two sides. For five days we never saw a law enforcement officer … We took shifts watching the street and who was coming and going. Our neighbors brought us coffee in the middle of the night, a night that was lit with the flames of burning buildings. Twice cars came up our street, saw us armed and turned around.’”

Gun opponents ridicule those who feel they need guns to resist a totalitarian government; how about a “Sandy” event, just a little larger? Or the shut down of our country’s electrical system for several months? If trouble arrives, would you rather stand guard at your driveway armed with a garden hose or a gun? Polls show that the majority of Connecticut residents prefer the garden hose defense strengthened, no doubt, with “Gun-Free Zone” signs in every neighborhood.

If he lived in New York with its six-round limit on cartridges, he’d be dead. In Connecticut, with 10 shots allowed, he might, maybe, have made it

North Carolina: four men invade home, homeowner shoots two, drives others away. “If this man were properly trained,” Connecticut Governor Dannel Malloy (could have) said, “he’d have only needed four bullets – we give him ten. Of course, with our new limits on ammunition he wouldn’t be allowed to practice shooting, but that’s his problem, not ours. If it saves the life of one child ….”

Malloy: And when we extend it ’til June, Chelsea Squire can get her Whole Foods potato chips

Relax, gentlemen, just one more month until May 13th

Connecticut claims the latest “Tax Freedom Day” in the nation, May 13th. After that, our labor is supposed to belong to us. Why do they permit us to keep almost seven-and-a-half months of our earnings? Why not take 90%, as advocated by Dollar Bill and his fellow Democrats (despite repeated requests, DB never explained why he’d stop at just 90% when, he claims, we are all property of the state and our earnings belong to the collective, to be distributed as it sees fit).

Over at Wilbur Peck Chelsea Squire, unmarried mother of four, was enthusiastic about other people working longer days for her comfort. “Only the two oldest boys, Zaire and K’den have their own cellphones,” she explained, ”  and with Knowa and Collin coming up in age, they’ll need phones too. Hell, right now, I can’t even afford to buy  poor K’den a damn vowel – why shouldn’t someone work just a little more harder for my boy?”

Yes, that’s a beer in that leader of the new world order’s paw

“A generation on, the Thatcher era seems more and more like a magnificent but temporary interlude in a great nation’s bizarre, remorseless self-dissolution.”

…. In Britain in the Seventies, everything that could be nationalized had been nationalized, into a phalanx of lumpen government monopolies all flying the moth-eaten flag: British Steel, British Coal, British Airways, British Rail . . . The government owned every industry — or, if you prefer, “the British people” owned every industry. And, as a consequence, the unions owned the British people. The top income-tax rate was 83 percent, and on investment income 98 percent. No electorally viable politician now thinks the government should run airlines and car plants and that workers should live their entire lives in government housing. But what seems obvious to all in 2013 was the bipartisan consensus four decades ago, and it required an extraordinary political will for one woman to drag her own party, then the nation, and subsequently much of the rest of the world back from the cliff edge.

Pretty much my own thoughts as I watched “The bitch is dead” celebrations erupt in England after the Iron Lady’s death. These louts were celebrating the death (and thus bemoaning the life) of the only person who stood between them and ruin, but I suppose they’re products of modern progressive education and can’t understand that (I wonder whether our own Dollar Bill is a product of Cambridge?). Like Steyn, I also see her tenure as just a speed bump, a temporary diversion from the coming collapse.

What, it’s a secret, or did the editors not want to make Chelsea Squire (more) envious?

Malkin Properties provided Greenwich Time with exterior renderings of the 1917 Beaux Arts-style building showing the planned restoration of its limestone facade and windows.

They won’t, but we will:

Has a fat girlfriend, presumably

UPDATE: Greenwich Time thoughtfully provides a chart showing the number of Food Stamp recipients in each Connecticut town.  From its headline: “The Great Divide”, the editors apparently intend to show that Greenwich has fewer welfare types than other towns. The real story is the increase in food stamp persons here in town compared to other cities: our rate is soaring as theirs remain steady. Must be the opportunity to encounter Regis Philbin at CVS that’s drawing them here, eh? 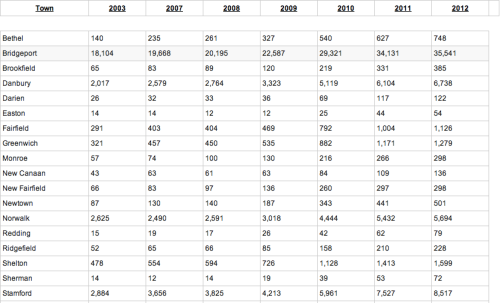 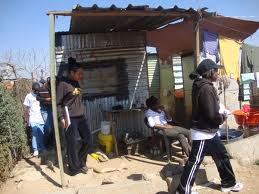 Single mother of four, no skills, no education, receives free housing, education for those children, food, clothing and cash, but can’t find her favorite potato chips at Whole Foods. Oh, the humanity!

[Chelsea Squire] came to Greenwich in 2003, amid a construction bonanza in which mansions practically sprouted on top of each other. Fueling the frenzy was a hedge-fund boom that by 2005 had concentrated 10 percent control of the global industry’s trillion dollars in this town of 61,000.

The 28-year-old single mother and her four sons are part of the 4 percent of residents watching from the sidelines, from the roughly 760 units of low-income public housing scattered around Greenwich. Most were built in the 1940s and ’50s for soldiers returning from far-off war. Today, they’re supposed to be a refuge from economic battles.

Chelsea loves sending her kids to Greenwich schools. She loves how the classrooms are filled with technology and textbooks instead of youth gangs. She enjoys her chance encounters around town with the likes of Regis Philbin, whom she once met at CVS. “Hi, how are you?” he said with a smile.

But Greenwich can also alienate. Last year, when about 50 homes sold for more than $5 million each, Chelsea struggled to pay her $50-a-month rent [which she’s behind on – Ed]. She hates how some residents seem too high up the economic ladder to notice how hard she and people like her struggle to get by.

With the holidays nearing, she finds herself in one of the darkest chapters of her adulthood. Hoping to cheer herself, she hangs a wreath from her faded front door. She puts up a tree in her sparsely decorated living room, beside her second-hand, half-broken couch. Then she frets.

That is all the Christmas spirit she can afford.

To explain how she got here, how she can get up to $650 in monthly food stamps, but can’t find her favorite potato chips at Whole Foods, she has to recall her childhood.

I’d be more interested in hearing how she plans to get out of her miserable existence, but that’s not discussed. All we really need to know about “how she got here” is found in this one sentence:

They didn’t exactly plan it, but after Keith moved in, they had three sons together inside of four years: K’den, Collin and Knowa.

“Didn’t exactly plan it”? Oh, if only Mitt Romney hadn’t taken away that free birth control for this poor woman, then she could have planned. But for Greenwich Time and its “editors”, poverty like that being experienced by Chelsea Squire is a phenomenon that just arrives, no known cause, so instead they focus on that old fourth-grade writing task, “compare and contrast”, which these days passes for insightful reporting:

Back in the car, she steers downhill, beneath the train tracks and highway, to where the salty air hangs over the water. She drives past the Delamar Greenwich Harbor hotel, rising in all its Mediterranean splendor like it’s in the south of France. She drives past brick condos that fetch millions of dollars. Parks near the Indian Harbor Yacht Club. Climbs out and walks to the edge of a rocky pier jutting into Long Island Sound.

To her left, crowning another peninsula, is a $27 million mansion, with stately balconies, tall porticoes and a colonnade with landscaping descending on an even carpet of grass to the sapphire surf. For a moment, she stands there, staring at it.

Then her cellphone rings.

I’d write more, but my own cellphone is ringing. Perhaps it’s Chelsea.

UPDATE: A Stamford Advocate reader took the trouble to check out the criminal histories of Chelsea and the father of three of her children. Oops!

Maybe some research the reporter might have done before going to press: