Bring on those out-of-town buyers, and hurry!

Your P&Z is out to destroy Old Greenwich. Not destroy it completely, but transform it into an enclave of a few very expensive new homes for the very rich. Here’s a bit of what it’s after, summed up in this letter from the Shoreland’s President:

Attached is the “Statement of Clarification on the Placement of Fill” dated May 1, 2013 from the Greenwich Department of Public Works.
This is not what we had hoped for and, had written a letter to the Town Officials stating as such.  This will certainly change the way Shorelands looks over the next several years.  If you can, I suggest trying to dispute your VE classification with FEMA.  A group of residents are already in the process.
There is a house behind the Carter’s which has been raised to the 15′ mark.  Please go take a look at it.  That is what is going to be required.  The gentlemen with the beard and hat is very informative.  He told me that they are also using 25 Helianchors to keep the house in place.

And Mike Finkbeiner provides this from that same position letter of May 1.:

FEMA Zone A or AE along the coastline – The placement of fill should be minimized. A determination
should be made to confirm no existing low spots exist on the parcel. If the proposed fill is to be placed within
an existing low spot, a drainage analysis will need to be completed to show that the fill within the low spot
has not caused an increase in peak flow and runoff volume to a neighboring parcel or road. Also note,
FEMA recommends the lowest finished floor of the building be placed two to three feet above the
designated Base Flood Elevation.

Sound Beacher sends along these pictures of a house (Bernie Armstrong’s?) on Meadowbank being raised – your future down there. 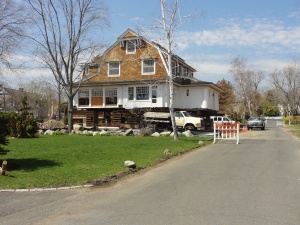 18 responses to “Bring on those out-of-town buyers, and hurry!”