SAC in talks with prosecutors to close fund to outsiders and turn into a personal trading operation for Stevie Cohen’s billions. In exchange, the feds would stop trying to put Mr. Cohen in jail. That sounds like a good deal for Cohen, but there are presumably a lot of traders, executives and even secretaries soon to be out of work.

19 Terrace Avenue, Riverside, a house I liked very much and have mentioned here several times, finally has an offer. Last asking price was $2.490 million, owners paid $2.8 for it in 2005 and poured a ton of money into it. Original listing price was $3.495 back in 2008, which was probably not a crazy price except for the fact that 2008 was no time to try to sell real estate. Buyer’s getting a great deal here, in my opinion.

11 Byram Dock Street, asking $2.849 million. Started at $4.695 in 2007 and has tried various prices at various times over the subsequent years. Apparently this last price was the ticket. 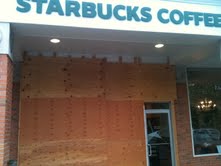 An errant parker drove through the Starbucks window at the Whole Foods plaza over two months ago and today the storefront is still boarded up with plywood. An employee told me that they are still waiting for the Building Department to approve the replacement of the glass. That’s two months and counting.

The broken window theory of crime postulates that unrepaired broken windows are a sign of neighborhood neglect and abandonment and that in turn encourages first, more vandalism and then more crime of all types. I’m not suggesting that Greenwich is in for a crime wave but boarded up storefronts certainly create a look of indifference and urban decay, which, presumably, not even our Building Department wants.

I know nothing about the facts behind Starbucks’ difficulties with our regulatory agencies but the employee’s story jibes with what I’m hearing from my builder friends: it is becoming increasingly difficult to get even the simplest inspections and sign offs from the Building Department and Planning & Zoning, and the delays in completing even the simplest projects are mounting. Given the unceasing efforts to add regulations to every aspect of life here in Greenwich, this doesn’t bode well.

What’s the solution? Presumably, a leader in the First Selectman’s office to address the issue and take charge of solving it. Peter Tesei is clearly not that person, and God forbid we let a Democrat in to add to our woes. Between an out of control budget – ours is 50% larger than Fairfield’s a city of exactly our size – bad decisions on adding to and maintaining our infrastructure and a bureaucratic nightmare in Town Hall, we ought to be able to do better.

Rest easy, Connecticut, the legislature’s got your back

By unanimous vote, the state Senate has passed a bill prohibiting homeowners from planting bamboo screens within 100′ of their property line.

Failure to keep it under control — through an approved barrier or container — would make property owners liable for damage to neighboring properties.

Sen. Clark J. Chapin, R-New Milford, ranking member of the Environment Committee, said during the floor debate last week that the issue might have received the most interest of any bill during the panel’s public hearing process.

“It has been an ongoing problem,” he said. “While some people may think that a better approach would have been making this an invasive species, the Invasive Plants Council actually considered that and decided this particular species did not meet that definition.

“We did recognize that it is a very big issue for a lot of people in the state of Connecticut,” Chapin said.

I’m sure it’s an important matter, and I’m not at all surprised that it’s a bigger issue than our yawning budget deficit or ammunition permit requirements, but is the legislature really so underworked that it can devote floor debate time to this? New Hampshire requires its legislators to stay at home tending to their own business, and only lets them come to the capital once every two years to wreak havoc. That’s an example we could emulate, to our benefit.