When he’s not frothing over Slurpees, Bloomberg can get it right 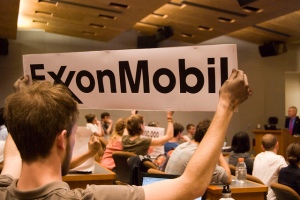 Swarthmore collegian demonstrates his skills as a human sandwich board

The Mayor’s career advice: go to trade school and become a plumber rather than waste your money (or your parents’) on a $100,000 “education” in, say, victimhood studies.

Absolutely agree, and his advice is doubly true for graduate school, from law to psychology to African-American studies. What could a Swarthmore student, for example, possibly offer an employer that would be of value? Protest demonstrations? Fossil fuel is death rants? Riot leader?  A heightened awareness of white oppression, coupled with an inability to think, isn’t going to command any kind of salary except in academia and the government and, so far at least, there aren’t enough jobs in those industries to support the multitudes spawning on our campuses. Swarthmore children can rely on their inheritances – debt-burdened graduates from more modest backgrounds cannot, and they’ll pay for their four wasted years for the rest of their lives.

11 responses to “When he’s not frothing over Slurpees, Bloomberg can get it right”