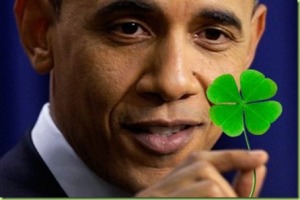 With this shamrock, I thee wed

Michelle Obama in Dublin: “it’s so good to be home.” First anyone’s heard of a new country of origin for the lady but hey, every politician’s Irish at least on one day of the year – Michelle’s just jumping the gun on St. Paddy’s Day.

And, as always, there’s this perennial story:

First lady Michelle Obama is sparing no expense on her trip to Ireland, staying at a $3,300-per-night hotel suite in Dublin.

Irish press reports Monday said Mrs. Obama and her entourage have booked 30 rooms in the five-star Shelbourne hotel. The first lady is said to be staying in the Princess Grace Suite, named for the Hollywood film star and princess who had an attachment to the room.

Anyone else remember when the husband of Miss One Per Cent was telling the rest of us it was our moral duty to sacrifice for the betterment of others? Guess she doesn’t either.

Obama’s finally figured out something important about himself

To protect and to serve

The country has gone insane

West Virgina – West Virgina! – 9th grader faces year in jail for refusing to take off NRA tee-shirt. I heard a psychiatrist describe a similar over reaction by a school – in that case, elementary school boys who, with the permission of their math teacher, shot foam darts at each other – as “psychotic in the strictest definition of the word: removed from reality”.

By that definition, the country has gone nuts. 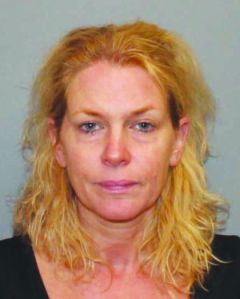 Not much of a story – seems the poor woman is addicted to alcohol, and that’s just an old, sad problem, but it is of interest, perhaps, to note the respective clout of different areas of town. The woman taught at Eastern Middle School for years, as I understand it, where her drinking was notorious, but union rules kept her in the classroom. In 2010, after she’d been arrested for a drunken row up in Norwalk, the union was still able to protect her employment within the school system, but Eastern parents were fed up and the publicity of her arrest gave them the leverage to get her shipped off to Western. Western parents were presumably not consulted.

We may be separate here in town, but we’re certainly not equal.

UPDATE: Greenwich Time has caught up with the story.

The amazing thing about Greenwich is that, at the right price, there’s a buyer for everything

Pass through towns in, say, Vermont or Kansas, and you’ll see old weathered “For Sale” signs on properties that have obviously been on the market for years, with no takers. Not so here: there’s always a buyer.

Case in point is 2 Cary Road, asking $429,000, which reports an accepted offer today. No back yard, no front yard, a huge ledge between house and river, and a house that, if it were torn down (and it should be), probably couldn’t be rebuilt because of new, stricter zoning laws.

A large turnout, not much new light added. If you’ve been to some of the 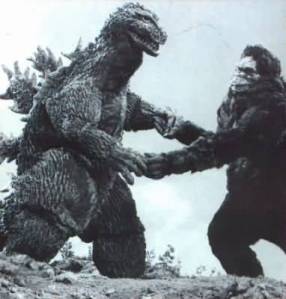 The Board’s now “consulting with lawyers” about the merits of challenging the state’s demand that we redistrict to achieve “racial balance”.

The stranger danger of out of towners using our schools is a shibboleth: the administration does track down those reported to it and has found at  most two students who shouldn’t be here. I doubt that the problem is as small as they say it is, but I also doubt that the root of all our problems with overcrowding is kids crossing the Byram River from Port Chester. Sooner or later, and probably sooner, we’re going to have to address overcrowding.

The four options the Board started with: complete redistricting, partial redistricting with more magnet schools, a third, which I forget, and a lottery system, are still the only four options under consideration (lots of soothing talk saying that’s not the case, but boiled down,  that’s the case).

The lottery system: no fixed school districts, children assigned to their first, second or third choice, as luck dictates, was called a “market solution” by the superintendent. I pointed out that only a proponent of centralized government could describe a system that forcibly moved students around town against their and their parents’ wishes as any kind of free market – the super amended that to mean a “controlled market” – an oxymoron, but he meant a system controlled by him, which was my point.

Absolute silence greeted the suggestion that we leave school choice to individual parents and influence that choice by offering them cash to switch schools. “We are not going to pay people to move”, Ms. Moriarty flatly declared, and judging from the silence of my colleagues, they’re in agreement. I would despair, but Moriarty also said three weeks ago that the town had no choice but to obey the state, and now she and her fellows are consulting lawyers about that, so I imagine enough pressure can change her mind on this, too.

Big Realtor cheer for Nancy Healy’s suggestion that we return sports to our middle schools and have each offer just one or two, with the most popular – football, I assume, going to the least popular school (that would be the school whose name cannot be said, “Western”). Would Riverside parents really bus their kids to Byram to increase their chances of gaining a career in professional football? I wouldn’t, but judging from the applause that greeted this suggestion, lots of fools would.

Brother Gideon was applauded for pointing out that Hartford can’t spend our money wisely so why should we follow their advice on how to educate our kids? Fight, fight fight!

Take away: the lottery option won’t happen – several other agents backed up my own belief that we’d destroy property values all over town if buyers couldn’t have any certainty where their children would go to school. System-wide redistricting, moving hundreds of students long distances. Which, I think, leaves the BOE with its partial redistricting/magnet school plan, which is what we already have and which will never satisfy the state.

As an aside, for those readers who’ve advocated charter schools, know that the Connecticut teachers union has forbidden them and so long as Democrats rule in Hartford (forever), that’s a non-starter.

So no inclination to think outside the four options they started with, unless you consider Healey’s call for the return of intra-mural sports a viable solution, and certainly her fellow realtors did, and the town will just muddle along for another few years until the state finally moves against us.

What the realtors in the audience couldn’t grasp is that the cash-for-shifting plan is the only one that stands a chance of relieving school overcrowding without affecting property values because the choice would remain personal to the parents and not permanently change the school that particular address is assigned to. If a home is in the Dundee district and the parents chose to pocket some cash and switch to North Mianus, the house would still be in the Dundee district when it was time to sell. Forced redistricting doesn’t work that way.

A market-based solution to redistricting 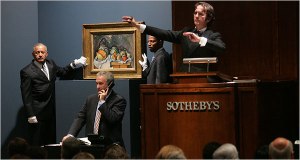 And Central Middle School goes to the parents of Ricardo Gonzales, New Lebanon!

Readers Balzac and Inagua have proposed a pretty simple solution to achieve redistricting, all voluntary: offer cash to parents at the target school to move their children to underutilized facilities. Balzac points out that the total number is small.

Can’t the racial imbalance be solved with vouchers and freedom of choice, in a simple and economic manner?
The Town of Greenwich spends about $20,000 educating each student for a year. ….

Let’s calculate how many Hamilton Ave. and New Lebanon minority students must choose a valid alternative and leave those schools, in order to bring them down to 50% minority. Remember, the racial imbalance threshold is 25% more minority than the district average, which in Greenwich is 35%. Instead of being at the threshold of 60% minority (25% greater than the district average of 35%) let’s leave a margin for error and try to achieve 50% minority. That would require about 11 students to leave Ham. Ave. and 28 to leave New Leb., a total of 39. Let’s give each of them a voucher from the Town’s funds for $20,000 to spend at a school of their choice, of any type, anywhere, religious or secular. This is $780,000, a puny portion of our $176 million schools budget. Further, if costs can be reduced when the student count is reduced, the cost of this voucher solution approaches….zero.

And as refined by Inagua:

A simpler method might be to do what the airlines used to do when they overbooked a flight, offer people cash to take another flight, or in this case go to another school. Ask parents at the target schools to submit sealed offers of how much they would accept to put their kid(s) in specific underutilized public schools, and when the number reaches 40, pay all parents the highest offer plus busing.

Inagaua’s approach avoids the difficult issue of church schools/separation of church and state etc. and also solves the problem of underutilized public school facilities, so that’s the version I favor. I’d refine a bit further, though, and have a reverse auction: the winning bid starts at the lowest and climbs up from there until the 40 students are selected. Readers should feel free to poke holes in this approach, but I intend to bring it up at today’s meeting between the school board and us realtors: I’ll let you know the response.