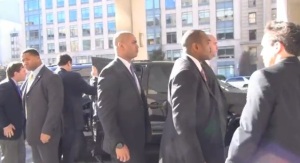 Municipalities can no longer protect their citizens, so citizens hire their own police. Oakland, and Baltimore are just two recent manifestations of the phenomenon. Of course, these people could just run for office and get their own protectors courtesy of the taxpayers, as Mike Blumberg and federal office holders do (just last week, the White House rejected a citizens’ petition that would have created a “gun free zone” around the President because, according to our leader’s spokesman, guns are necessary to ensure his safety and the safety of his friends and family).

Failing a successful run for office, though, unarmed citizens in cities and states where gun ownership is prohibited  are at the mercy of the criminals around them; hence the trend to buying private protection. And that’s all a good thing, to this libertarian’s mind, because the sooner citizens understand that the state can’t provide basic services, whether it’s educating our children or protecting our lives and property, the sooner free market solutions will be considered. Private schools, home education, private police and fire protection,that’s all just a start. So come on, Dannel, Drew, bring it on: Next up, we’ll sell the streets. 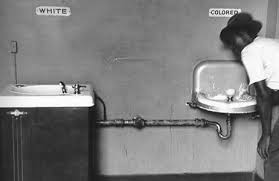 Northerners are soo much more subtle

Developers of new luxury condo project ($15 million per) will offer separate but equal entrance for the middle class folks they’re being paid to house. New York City is one of the most lucrative sources of campaign funds for Democrats (that factoid is unrelated to this article, I’m sure).

Five floors of affordable housing will face away from the Hudson River and have a separate entrance, elevator and maintenance company, while 219 market-rate condominiums will overlook the waterfront.

It’s hardly news that people of great wealth don’t want to rub shoulders with mere accountants and others who toil for a living, so here’s what I think is the most interesting part of the story:

… Extell is also seeking a controversial 421a exemption — a tax break given to developers who include affordable housing in their market-rate buildings.

In October, The Post reported that five of the luxury firm’s towers cost the city $21.8 million in tax revenue in their first year alone.

Together, the buildings paid just $567,337 in annual taxes. Without the 421a program, they would have paid the city $22 million, according to appraisal firm Miller Samuel Inc.

Probably because I saw a nice buck in the woods today, three weeks before deer season, I thought of this quote 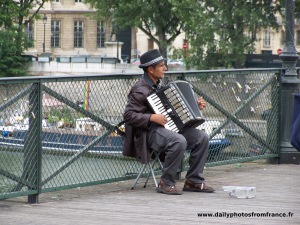 “Going to war without France is like going deer hunting without an accordion. You just leave a lot of useless, noisy baggage behind.”……..

This should prove interesting

Bangkok Muslims thoughtfully translate their signs to English for the benefit of the press.

Rag Head Brigade plans “Million Muslim March” in D.C. this September 11th. I haven’t travelled to our capital to protest since the days of Kent State, but I’m tempted to attend this one.

The militarization of our police continues

Throw down your okra and come out with your hands up!

A small organic farm in Arlington, Texas, was the target of a massive police action last week that included aerial surveillance, a SWAT raid and a 10-hour search.

Members of the local police raiding party had a search warrant for marijuana plants, which they failed to find at the Garden of Eden farm. But farm owners and residents who live on the property told a Dallas-Ft. Worth NBC station that the real reason for the law enforcement exercise appears to have been code enforcement. The police seized “17 blackberry bushes, 15 okra plants, 14 tomatillo plants … native grasses and sunflowers,” after holding residents inside at gunpoint for at least a half-hour, property owner Shellie Smith said in a statement. The raid lasted about 10 hours, she said.

Local authorities had cited the Garden of Eden in recent weeks for code violations, including “grass that was too tall, bushes growing too close to the street, a couch and piano in the yard, chopped wood that was not properly stacked, a piece of siding that was missing from the side of the house, and generally unclean premises,” Smith’s statement said. She said the police didn’t produce a warrant until two hours after the raid began, and officers shielded their name tags so they couldn’t be identified. According to ABC affiliate WFAA, resident Quinn Eaker was the only person arrested — for outstanding traffic violations.

This is happening in every state, red or blue, fueled by the massive giveaways of surplus military equipment by our Department of Homeland Security. Funny, I feel far less secure now than ever before.

Tagged as Militarization of police

A reader asks if I know what’s happening at 85 Indian Head Road, which sold at full asking price, $3.195, last month. He and his neighbors have received notice that the new owners intend to build a 10,000 sq. ft, house on the property’s 1.79 acres – “is that true?”

Yes it is. In fact, the listing notes that:

I was going to write on this earlier, because it shows the importance for sellers to remove as much of the uncertainty about what can be done with their property as possible. This land sat, unwanted, for at least a year (maybe two), priced at less than it eventually sold for, because all the sellers had to offer was a 1903 carriage house on land encumbered by wetlands. The owners proceeded to get a house, septic system and drainage plan approved, then put it back on the market. Gone in a bidding war.

Currently there are several houses for sale that, because of the new FEMA regulations, can’t guarantee a buyer that any improvements can be made to the exiting house. Deal after deal has been reached and then fallen apart as the magnitude of the uncertainty becomes clear to potential buyers. If you have a similar property and you’re thinking of putting it up for sale, I’d advise dealing with that uncertainty now, rather than leave it to the buyer. If you find a buyer at all, he’ll demand a huge discount to compensate for the risk. Spend a little up front now or lose a pile later.

Looks like James Taranto’s worst fears have been realized

Taranto, the WSJ’s editorialist responsible for “Best of the Web Today” said from the beginning of the IRS scandal that it would be better for the country if the targeting of conservative groups was on the direction of highly placed administration officials because if that were the case, the abuses could be stopped merely by replacing those individuals. The worst case scenario, he cautioned, would be if the lawlessness was systemic, a pervasive determination to punish and root out groups that the IRS rank and file sees as a threat to their bureaucratic existence.*

It turns out it’s the latter, and the IRS management can’t stop the abuse and lawlessness despite directly ordering those lower down to quit. Picture robots gone wild, overthrowing their human masters, and you have the basic idea.

* From Taranto: “In his testimony to the Senate Watergate Committee–whose hearings opened 40 years ago today—John Dean famously called that scandal “a cancer on the presidency.” If Obama, his campaign or his White House aides are directly implicated in the IRS’s abuses, this will be another cancer on the presidency, remediable by resignation or impeachment.

But if the IRS acted without direction from above–if it “went rogue” against the Constitution and in support of the party in power–then we are dealing with a cancer on the federal government. That, it seems to us, is a far direr diagnosis, one whose treatment is likely to be radical and risky.”

Say it ain’t so: these protesters have no clue what, or why, they’re protesting 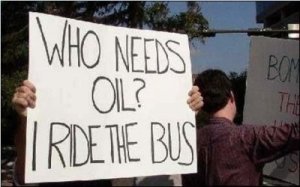 Happened in Canada, but their witless brethren are assembling on U.S. campuses as I right (pun), waiting for the fall marching season to begin.

[At] a Hamilton protest last week, I tried something different. I arrived at 11 a.m., and by 11:05 I had everything I needed to do a normal story. I had counted the 50 people there, taken pictures of the more entertaining ones and took a little flyer explaining their point. They were against the reversal of an oil pipeline called Line 9. (Right now that pipeline ships OPEC oil from east to west; the company wants to reverse it, to ship Alberta oil from the west to the east.)

The first thing I learned is these protesters were clueless about the pipeline they were protesting, and about oil and economics in general.

I asked one of the protesters, Mike Roy, why he is only protesting the pipeline now, even though it’s been operating without incident since the 1970s. He seemed genuinely surprised to learn this. I asked him why he only opposes the plan to put Alberta oil in it, but was fine with it pumping OPEC crude for decades.

At first Roy simply refused to believe me. He was confused about how OPEC oil could be pumped from Alberta. He didn’t understand that the pipeline was operating now, with Saudi and Algerian oil now. The Alberta plan would be a change — that’s the “reverse” part that he was protesting. He didn’t know that.

When I pressed him on why he prefers Saudi oil in Line 9, he said he opposes Saudi oil too. But he couldn’t explain why he has never protested Saudi oil before, let alone protested at the Saudi embassy. I asked these same questions of a half dozen protesters, and all were confused. One woman proposed an excuse: she prefers Saudi oil, she says, because it’s “sweet oil.” I think she believes that means it’s like sugar water, so it’s better for the environment. Others pretended not to use any oil at all — as if you can bicycle to work in Hamilton in February.

How could people who were so clueless about what they were protesting also be so passionate, too? That’s the second thing I learned. I did what many reporters simply don’t do — I Googled the names of a half dozen protesters there. Mike Roy was from London. So was Bailey Lamon. And Dan Beaudoin. Jeff Hanks was from out of town too.

They’re professional protesters, who go from town to town on whatever the cause of the day is — Occupy, Idle No More, anti-GMO food, whatever. That’s why they didn’t know anything about the pipeline. They didn’t care. They just like protesting.

You wouldn’t know these things if you were a reporter too busy to find out. Or too sympathetic to their cause to find out.

Not unlike our media’s coverage of foreign protestors with the demonstration placards written out in English for the benefit of US camera teams; we oblige.