Here’s one that got away

From me, at least. 275 Riverside Avenue, $3.495 million, has gone to contract. Owners paid $3.5 for this in 2006 and put in a ton of money – I heard over a million, certainly lots and lots. They added on, built dormers in the third floor to create entirely new space, built a new kitchen, redid the baths, etc. etc. etc. I thought its price of $3.850 back in October was a fair one, but it languished; probably, it seems silly to say this, because it lacks airplane-hangar-sized master closets. Whatever the reason, when its price hit $3.495 it was a screaming steal, and someone has grabbed it. You’ll find other Riverside homes coming on at this price range, but none with an extra million of homeowner improvements thrown into the deal. All that money may not have made this a $4.5 million home, mind you, but it put it light years ahead of the next crop of $3.5s to hit the market.

7 Hendrie Drive, Ole’s Creek, $2.2 million. This was a nifty piece of property: 0.8 acres in the R-12 zone, high above any possible FEMA flood zone revision – not even a polar bear could climb this high – and of course, an incomparable view of Chateau de La Fontaine across the way. I’m surprised it didn’t sell for a premium.

Eddie Lampert, formerly of Belle Haven, now a resident of Florida, continues his losing ways: Sears results down again. Geeze, he’s even managed to destroy the appliance division, which used to be a valuable asset.

Sears Holdings had a second-quarter loss of $194 million, steeper than the year-ago loss of $132 million and far wider than analysts had expected.

Sales and margins deteriorated in key categories like appliances, where Sears’s Kenmore brand once had been dominant.

“We recognize how important it is to improve the profitability of our company and I am disappointed that we did not deliver a better result,” Lampert said in a statement yesterday.

Lampert has made similar statements almost every quarter since he merged Sears and Kmart in 2005 to form Sears Holdings, critics said.

Since then, Lampert has harvested the retailer’s cash by slashing spending on stores and selling off many of its best locations and most profitable businesses.

While Lampert insists he aims to turn things around, some critics say he is managing a slow, systematic liquidation.

“Time does not appear to be on the side of this company,” [Credit Suisse analyst] Balter said.

No doubt filling the void left behind by Mr. Lee’s sudden departure from the scene 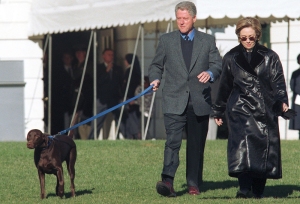 Bill Clinton and entourage arrive in the Hamptons. No word whether the Army will let Chelsea join him, but Hillary will be there, lining up support for her presidential run. This isn’t an “only in America story” – greedy, grasping people have sought political office for personal gain since Eve first handed out a promotional apple to her first constituent, but it is interesting to watch the Clintons ascend from dirt poor trailer trash in Arkansas to $200,000 -a-month summer homes, a $10 million co-op for the aforesaid Chelsea and even a serious shot at the Democrat nomination for a woman of no demonstrated talent, all fueled and funded by favor-seekers.