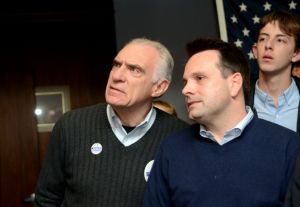 There goes Fountain’s vote, damn it

Reader Publius sends in this link to a study from Harvard (Harvard!) on guns and violence, “Would Banning Firearms Reduce Murder and Suicide?  The conclusion of the authors: it would not. This wouldn’t surprise anyone familiar with Massachusetts’ own experience with strict gun laws which, enacted in 1998, were as severe as those just passed here in Connecticut and enacted with the same enthusiasm and hope for change. The reason proponents of Connecticut’s “common sense” laws maintained a deadly silence on the Massachusetts experiment was that those laws, while causing legal gun ownership to plummet, also saw murders almost double (65 in 1998, 122, 2011), armed robbery increase 20.7% and armed assaults rise 26.7%.

But enough about failed experiments of the past, what do these Harvard academics think now? Here are some excerpts:

So it would not appreciably raise violence if all law‐ abiding, responsible people had firearms because they are not the ones who rape, rob, or murder. By the same token, violent crime would not fall if guns were totally banned to civilians. As the respective examples of Luxembourg and Russia suggest individuals who commit violent crimes will either find guns despite severe controls or will find other weapons to use.

The “more guns equal more death” mantra seems plausible only when viewed through the rubric that murders mostly in‐ volve ordinary people who kill because they have access to a firearm when they get angry. If this were true, murder might well increase where people have ready access to firearms, but the available data provides no such correlation.

Thus both sides of the gun prohibition debate are likely wrong in viewing the availability of guns as a major factor in the incidence of murder in any particular society. Though many people may still cling to that belief, the historical, geographic, and demographic evidence explored in this Article provides a clear admonishment. Whether gun availability is viewed as a cause or as a mere coincidence, the long term macrocosmic evidence is that gun ownership spread widely throughout societies consistently correlates with stable or declining murder rates. Whether causative or not, the consistent international pattern is that more guns equal less murder and other violent crime. Even if one is inclined to think that gun availability is an important factor, the available international data cannot be squared with the mantra that more guns equal more death and fewer guns equal less death. Rather, if firearms availability does matter, the data consistently show that the way it matters is that more guns equal less violent crime.