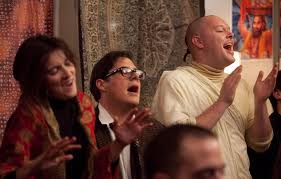 Vanna White says her son has been brainwashed by Hare Krishna sect.

Vanna White is fighting to save her teenage son after fears that he is being brainwashed by a monk from the Hare Krishna movement, it has been revealed today.

The 56-year-old’s son Nicholas, who likes to be called Nikko, is living with a monk twice his age while both attend the University of Arizona.

The 19-year-old reportedly has been living with Hare Krishna devotee Jaycee Akinsanya, 34, in his small house in Tucson.

Democrat Party Chairman Francis Fudrucker refused to make his next appointee to the BOE, cultist Ramadamadingdong Tamm, available for comment. “Nothing to see here,” Fudrucker said, “move along, move along.”