I doubt Wal-Mart or its shoppers will miss them. 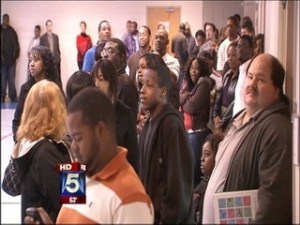 Walmart associates in 15 cities will walk off the job Thursday in the latest in a series of actions against the nonunion retail giant organized by the United Food and Commercial Workers union through the activist group it backs, OUR Walmart.

The group claimed that “thousands” would walk out.

Washington, D.C., was included by the group in its announcement but there are currently no Walmart stores located in the nation’s capital. [Because that city, with one of the highest unskilled labor unemployment rates in the nation, bans them – Ed]

A planned post-Thanksgiving action largely fizzled due to poor turnout. Many of the protesters at the events were not actually Walmart employees and in some cases were bussed in from outside. But UFCW and other unions have kept at it hoping to build legitimate grassroots support.

14 responses to “I doubt Wal-Mart or its shoppers will miss them.”