Anyone else remember the Mary Capozza murder?

A reader just reminded me of the 1987 unsolved murder of Mary Capozza, who disappeared from her home on Byram Shore Road and turned up in the Kensico reservoir, in a duffle bag. Following their  usual procedure the Greenwich Police declared it a suicide and closed the case, but some in town still wonder whether that in fact is what happened.

And a reader writes that poor Mary had a husband, Andy, who lived in a separate part of their house due to marital discord. I do believe I’d have started a search for a perpetrator with him.

Sometimes, you just have to change the channel and move on

64 Howard Road, away up yonder on the Stamford border, is back on the market, still listed at $2.550 million. The owner is a (former?) newscaster who was  hottie when we both lived in Bangor Maine – made the evening news almost enjoyable, even if she seemed no more intelligent than any others in that box of bricks, made her way down here to New York and made, presumably, a lot of money. It may be time for her to let some of it go.

The house was sold to her for $2.775 million in 2004, which is what happens to people who come out from the Big City to buy a house in the country, so it must have seemed logical to her to list it for $2.995 in 2010 when she decided to sell. Logical, perhaps, but two brokers and 904 days later it remains unsold – time for a time check, lady.

I like the northeastern corner of Greenwich because it still feels rural, but historically, homebuyers have not shared that affection, and prices up here are much lower than in much of the rest of town. 2004 probably marked the top of the curve for upper Taconic, and certainly prices haven’t increased since then. 64 Howard is a very good house and someone will like it very much but, and  I’m just guessing here, I see another price drop in this home’s future before it is finally sold.

A little bit of activity reported

A sale, an accepted offer, a price increase (!) and a decrease (in Riverside, no less).

An August 8 sale that was just posted today is 22 Welywnn Road, Riverside, asked $2599, got $2.375. Welywnn’s a nice street, off the northern portion of Indian Head Road, so easy walk to the schools and train; this price doesn’t surprise me at all.

And poor old 85 Richmond Hill Road, up near the North Pole, has finally found a buyer, or at least someone has made an acceptable offer. Latest asking price was $5.495 million, which sounds like a lot, and it is, but the owner bought this spec home when it was brand spanking new in 2006 for $7.1 million. I don’t think he ever lived in it – marital discord, and he put it bad up for sale in 2007 for $8.9 million, with no explanation of why it was worth almost $2 million more than the year before. Even more curious, when it didn’t sell after six months he must have panicked, because he chopped a full $5,000.00 off its price and, six months later again, another $5,000. That $10,000 reduction produced nothing in the way of a buyer but did provide a good source for derision, heaped on with great enthusiasm by this blogger.

It was rented out for a while, then returned to the market in 2010 for $7.675 and, 1,438 days after beginning its journey, has seemingly found a buyer. It looks as though instead of making $2 million on his purchase, the owner will lose $2 million. Real estate’s funny that way.

The owners of 6 Dunwoodie are taking a different approach from Richmond Hill’s and after they were unable to sell their home for $1.690 million, have increased it today to $2.250 – let this serve as a cautionary tale to you recalcitrant buyers: pay full asking price now or be punished later; your choice.

And 40 Winthrop Drive, Riverside, which came on just a week or two ago for $3.395 has dropped to $3.195. That’s a smart move on the owners’ part and their agent. This is quite a nice home inside, and the yard and the street are great, but if the market is telling you you’ve overshot the proper price, don’t d*** around, fix it. In some areas of town, two weeks without an acceptable offer shouldn’t be wildly alarming but in Riverside, in this market, in this neighborhood, you definitely guessed a little bit wrong. Nothing wrong with that- no one said this was a science, but don’t cling stubbornly to a price you want if the market says you want too much. I applaud these folks, and if you haven’t seen it, check it out. Nice house.

Which is why we call it Rogue’s Hill

Brutal attack by bat-wielding husband up at 261 Round Hill Road.

The husband, Michael DeMaio, (who does not work for JP Morgan, Teri Buhl reports, even though Greenwich Time says he does) explained to the police that “he lost it” when his wife announced she was leaving him. Had the idiot kept track of the listing price of his (wife’s) house, he might not have been taken by surprise. It started at $8.998 million in 2012, suddenly dropped a million in November of last year to $7.998 and dropped still later to $7.299. On August 8, 2013, the house was withdrawn from the market; I’m guessing that was on the advice of a divorce lawyer as a dissolution suit was being prepared.

I am certainly not making light of this horrible act: the woman is in critical condition and has, according to the police, probably suffered permanent brain damage. But it’s interesting how Round Hill Road seems to draw far more than its share of criminals.

9 Byram Dock Street. I don’t recall if I saw this, but off the top of my head, I bet Zillow’s closer to the mark than the property’s new, unwilling owner. It did sell for $2.5 million in 2000, more fool they, but given its age: 1920, and its location directly on the water, it’s got to be non-FEMA-compliant, so look to spend major bucks bringing it up to code. 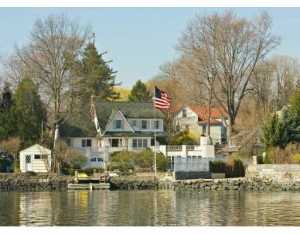 UPDATE: I pulled the old MLS listing and now I do remember it. Absolutely fabulous house, and the new bank-listed price is probably not bad, with the same caveat of FEMA compliance. I saw this in 2007 and really, really liked it, but it was asking the ridiculous, verging-on-nuts price of $5.8 million. So instead of pricing it reasonably, the owner lost it all. Hard as it is to believe, Greenwich is known for its sophisticated, savvy people. Not all of them, obviously.

UPDATE II: Looks to me like there was $5.8 million in mortgage debt on this place, which explains the original asking price and the reason for the collapse of our banking system. Other observations: Deutsche Bank started foreclosure proceedings in 2009 and only fought past the defenses of the debtor this summer – not bad for the debtor: stay in the house rent-free for four years. 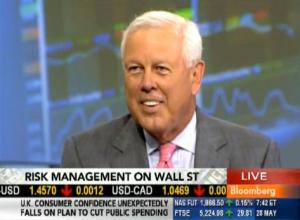 Bill Ferrell says, “why they’ll just let anyone in television!”

The (former) owner, one William G. Ferrell, was a trader turned hedgefunder who used to write about a number of topics including “risk management”. Oops.

And out in a state still struggling to remain free….

Colorado voters recall Democrat pols who voted for gun control laws. Bloomberg personally spent more money to defeat the recall ($350,000) than the NRA did to win it. Hope he has enough left to buy a Super-Slurpee to drown his sorrows in.

DENVER — The president of the Colorado Senate and a Democratic colleague, both supporters of gun-control measures following the mass shootings in Colorado and Connecticut last year, were ousted Tuesday in recall elections.

With 94 percent of the projected vote counted, voters in Colorado Springs favored recalling Morse by 51 percent to 49 percent.

Will Democrats replace Krumeich with a new running mate for Ramadamadingdong?

A Greenwich woman accused of stalking a state judge who was presiding over her divorce case, denied the charge Tuesday she had done anything wrong.

“I never stalked the judge,” said Lisa “Lee” Whitnum-Baker as she left the courthouse. “I did make a call to the judge’s home but it was a seven-minute call and that’s not stalking,” she said. “I know the law.”

Whitnum-Baker, 53, also volunteered that she had never stalked the governor.

“That’s just not true and besides that was years ago,” she added. There is no record of an arrest for that.

Whitnum-Baker, formerly of Stamford, is charged with second-degree stalking, second-degree harassment and disorderly conduct. Her case was continued Tuesday to Sept. 26.

Greenwich Democrat Chairman Francis X. Fudrucker told FWIW that he was still considering whether to make the switch, now that Whitnum has resurfaced. “We do prefer that our candidate slate be comprised of people with the same moral and mental standards,” Fudrucker said, “so yes, there’s certainly that possibility. On the other hand, there’s some value in having a counterweight on the ticket, so that Independents won’t think we’re completely, over-the-moon nuts. So that’s the dilemma: stick with our base or reach out to other voters who aren’t in the party. My Vice Chairman – he’s in charge of prostitution, gambling, drugs, that sort of thing – Bill Gaston is all for dumping Beth and bringing Lee onboard and I understand that. But we’ll have to give this some real consideration.”