Cognitive dissonance, or just a plain old plot to destroy the country? 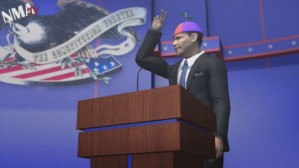 In the name of Mother Gaia, I salute you – let us pray.

Obama begins the shut down of coal plants today with his new EPA rules. No one (except miners) loves coal, and this will doubtless be greeted with hosannas from the president’s base, but there’s the inescapable fact to deal with: coal provides 40% of our electricity – how will we replace it?

We could use natural gas, of course: the switch from coal to cheaper gas has lowered  energy costs (estimated savings $1,400 per family, per year; far more than any increase than the Obama administration has achieved with his “laser-like focus” on the economy these past five years) and cut the CO2 emissions he’s so worried about 20% (a reduction at least twice that achieved by any other country).

But Obama opposes natural gas, and has done everything he can to prevent its use, from banning pipelines to prohibiting exploration or fracking on federal lands. His alternative is propeller beanies and solar panels, neither of which is producing any significant amount of energy and won’t, if it ever does at all, for decades. What do we do until then?

“Return to the Garden of Eden”, says the leader of the Free World and the crazed members of his congregation.

6 responses to “Cognitive dissonance, or just a plain old plot to destroy the country?”