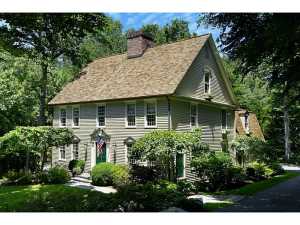 104 Old Stone Bridge sold for $1.750 million. This sale should come as a relief to its neighbors in this development, because two recent distress sales – estate in one, bank trouble in the other, had been in something like the $1.4 range. $1.750 isn’t as high as the low-$2 sales we saw at the peak, but it does mark a bit of firming in this area. A good house, in excellent condition but for all that, not so different from its peers that you couldn’t use it as a comparable.

Representative only: coal slag not included

We also have 313 Stanwich Road, lot “5”, back for another try, still priced at $1.695 million. That’s a more attractive price than the $3.6 asked in 2008 and most of the prices attempted in the succeeding years, but this 4-acre lot is: (a) behind the main house it was stripped from; (b) on a driveway shared by two other homes; and (c) not much of a lot to begin with. Four acres, yes, but much of that is swampland downhill from the building envelope, and not particularly attractive to anyone but mating tree frogs.

The seller paid $3.250 in 2007 for this lot and the 2.8 acres next door. The smaller lot is under contract, last asking price of $1.350. If you discount the value of an extra acre of wet muck, I’d think that sister’s price would be a fair starting point for this one.

313 Stanwich hasn’t had notable success in predicting prices, for some reason. The original house in front started at $6.495 in 2009 and finally sold just last month for $3.255.

72 Stanwich Road, on the other hand, has an accepted offer after just a short time on the market. Asked $1.590.

One takeaway from last night’s BOE meeting was that Peter Sherr was the only member who asked clear, articulate, intelligent questions, and pressed McKersie when that individual tried, at least to this observer, to duck them.

When two of the Democrat members – and I apologize for not catching their names – wondered out loud what possible use the BOE could have for verification numbers and information, Sherr replied that BOE members owed it to their fellow citizens to provide facts, not vague assurances, and that, as shepherds of the taxpayers’ money, they were responsible to be absolutely certain that we are paying only for the costs of educating town children, not those from elsewhere.

No wonder his fellow members and the RTC are so determined to get rid of him: he’s disruptive, and won’t play the “go along to get along” game so popular on school playgrounds and local Greenwich politics.

Bullet vote this November: cast one, and only one, vote for the entire BOE slate of candidates, and make that vote Sherr’s. That might just be enough to defeat the RTC powers who don’t want him.