No sales of note, but there are four more accepted offers reported, so people are still out there buying.

The former Jehovah’s Witnesses Church (they moved to new digs) at 477 Stanwich Road found a buyer after reducing its 2011 price of $2.3 million to $1.350. Merritt exposure, but four very nice acres and a church, if you want one. I know that one of our newer congregations looked at it back a year or so ago but felt that it was too far north from their current, albeit temporary quarters.

And even closer, if possible, to the Merritt, 424 Stanwich, 2 acres and a 1970 house, has a buyer. Asking price, $1.395. Between these two properties, you should have a pretty good idea of the Merritt factor in lowering property values.

10 Knoll Street, Riverside, was purchased for $2.150 in 2006, had some money put into it for renovations but couldn’t find a buyer at $2.395. The owners cut that price to $2.2, and now have an accepted offer. Nice street, good house for what it is, but there’s a limit to these things, even in Riverside.

Riverside waterfront, however, will always be in demand (until it isn’t). 4 Pilot Rock Lane, direct waterfront, came on 29 days ago at $5.495 million and has a contract.

AJ sends along the following:

“The Obama Administration has decided to block access to public memorials on the National Mall as a result of the government shutdown. Like its decision to end White House tours when the sequester cuts took effect, there is no rational reason for this. The Park Police, nominally in charge of monitoring these spaces, isn’t even effected by the shutdown. Shutting off access to these sites is gratuitous and petulant.

On Monday, the first day of the government shutdown, a number of WWII veterans showed up at a memorial to their service to find that access had been blocked. The memorial is in a public space and is open 24/7, with almost no oversight from Park Police …”

As this blog’s title suggests …

Rye homesteaders await the arrival of Julia B. Fee and her client’s offer

For what it’s worth – E mail from reader:

I just heard some anecdotal evidence that I thought might make some interesting blog fodder.  I was with a friend from Rye who said that houses in Rye are going to sealed bids recently and selling for a lot more than the asking prices.  Her reasoning was the schools.  I find that interesting given that Greenwich taxes are about 1/3 the price.  Rye used to always trade at a discount to Greenwich because of taxes, I thought.  Now that doesn’t seem to be the case.  What would you attribute that to?  Just wondering what you and the rest of the readers might think.  Might make people a little more interested in focusing on school performance and less interested in racial diversity and music auditoriums!

52 Arcadia is pretty much a land sale, looking for $1.8 million. Brother Gideon had it on the market for 90 days back in early 2011 at $1.650, without success. That was the market’s fault, not Gideon’s God forbid. Perhaps it’s improved now.

Kali-Naagy is up with the third of his Marks Road spec houses and has priced it at $3.595 million. That might be right, although his pair next door, nos. 24 and 26, each started at $3.999 back in 2011 and finally sold this spring for $2.9 and $3.0, respectively. This one is in the same general ballpark as number 3 and number 7 on Hearthstone, and it will be interesting to see the order in which they sell. “Interesting” not being used in any sense except the literal one: I’m curious to see how the market responds to each one.

So reports the Wall Street Journal

The mortgage preapproval, for years a crucial step in the home-buying process, is losing its luster with lenders, new data shows.

A mortgage preapproval is a written commitment lenders give to buyers that states the maximum size home loan they can get as well as the likely interest rate. … [N]ew federal data suggests lenders are scaling back on preapprovals…. Preapprovals accounted for 4% of purchase mortgages that were originated by these lenders last year, down from 9% in 2007.

In addition, preapprovals—which have traditionally been considered one of the first steps to getting a home loan—did not precede any of the mortgages doled out to home buyers by 14 of the largest 25 lenders last year. “The popularity of preapprovals is quite low,” says Mike Lyon, vice president of mortgage operations at Quicken Loans. (The mortgage lender had 598 preapprovals result in mortgages last year, down 43% from 2007, according to this government data.)

The demise of the preapproval comes at a delicate time for home buyers. As competition heats up, bidding wars are becoming the norm; for prospective buyers to stand out to sellers, they often need to show proof that they have lined up financing and are ready to proceed with the transaction …. Preapprovals provide that evidence to sellers, and buyers who lack them will have a hard time getting a home that has many offers on it. Preapprovals may also provide some leverage to buyers who are competing against all-cash buyers, who accounted for 32% of existing-home sales in August, up from 27% a year prior, according to the latest data from the National Association of Realtors. Because they don’t need a mortgage, all-cash buyers often make lower offers on homes; a home buyer with a higher offer and a preapproval could beat them out….

Housing experts, however, say the decline in preapprovals is largely due to dwindling competition among mortgage lenders for new clients. Prior to the recession, lenders used preapprovals as way to attract would-be borrowers. Buyers who had this commitment from a lender were more likely to turn to this company when they were ready to get the actual mortgage, says Keith Gumbinger, vice president at mortgage-info site HSH.com. In that way, preapprovals became a revenue source for lenders. Since the recession, many lenders have shut down, and that has decreased competition for buyers, he says…..

Several banks, including Chase and Bank of America, say rather than preapproving home buyers, they’re mostly doing pre-qualifications. With pre-qualifications, lenders inform borrowers of the size of the loan they can qualify for based on their stated income and assets as well as an initial credit check. Historically, pre-qualifications were the first step buyers would take before shopping, which was then followed by a preapproval when they became serious about a specific home they wanted to purchase.

To give buyers a better idea of where they stand, Chase says it provides a more detailed prequalification program through which buyers get a “conditional approval” that usually lasts 90 days, which they can share with the seller. The bank says this type of approval differs from the federal definition of a preapproval because it is not a written commitment; instead, its commitment is often delivered after verifying borrowers’ income, employment and the home’s appraisal. Similarly, a Bank of America spokesman says the bank wouldn’t approve a buyer until the home is appraised and the borrower’s financial condition is fully vetted.

A prequalification doesn’t provide the same leverage to buyers though as an official preapproval. Pre-qualifications are typically based on average mortgage rates rather than the rate that’s close to what the borrower would actually get. Also, most lenders can rescind a prequalification, whereas a preapproval is a commitment that usually lasts two to three months.

27 Cobb Island, over by Exit 4, $4.199 million. If you can put up with the highway noise, houses here have great water views and are (literally) convenient to transportation: the highway’s there and it’s a short stroll to the Cos Cob railroad station. I like the place and I’m okay with the traffic noise; others won’t find this acceptable.

I haven’t seen what, if anything the present owners have done since they bought this in 2000 for $3 million, but I’ll check it out tomorrow. Could be a decent deal, could be a bust. And again, regardless of the house itself, buyers’ reactions will be heavily dependent on their feelings about its proximity to I-95.

A friend of mine emailed me last night to beg off a hunting trip for the next few weeks because he’s been sick, and needs to return to work and get more comfortably solvent. I emailed back, “since we’re armed, why not just rob a bank?”, then paused as I was pressing “send” to wonder what the NSA was going to think of that sentiment. I sent it anyway, and I don’t really expect a SWAT team to show up at my door, but it’s creepy to know that our government is sweeping up every email, every phone call we make and storing them for possible future use. I don’t like it.

I know a couple of people who fled communist East Germany and Poland as twenty-year-olds, and they tell me that the greatest thing they found here in America was the freedom to criticize the government, politicians, even the local grocery store, without fear that someone would overhear and report them to the security forces. We are growing closer to their former reality, every day.

We’ve heard Obama “joke” about siccing the IRS on his enemies, then witnessed the exposure of a systemic attack on conservative groups by the IRS. Just last week, Dr. Benjamin Carson, a prominent black critic of ObamaKare, revealed that the IRS showed up in his office, for the first time in his entire professional career, after he’d   spoken out against the plantation owner at the annual National Prayer Breakfast:

“I had my first encounter with the IRS this year, unsurprisingly after the prayer breakfast,” Carson told an audience that at the annual BusinessCouncil of Alabama Chairman’s Dinner, according to a report from Cliff Sims of the Montgomery, Ala.-based Yellowhammer News.

Carson’s February speech February made him a conservative darling for criticizing President Barack Obama’s2010 health-care reform law, while Obama was sitting just a few feet away.

Much as they may delight in the harassment of a black who’s forgotten his place, Dollar Bill and his silent pals might try to remember Martin Niemöller: “First they came for the communist, but I did not speak out because I was not a communist….”

Of course, the contest was limited to Greenwich

Peter Tesei named “Selectman of the Year”. Did anyone think our second selectman, the unseen, unheard-of Whatshisname Theis was a serious contender? Drew Marzullo?

The world without us 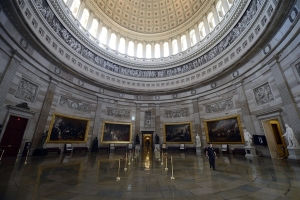 Congress achieves the liberals’ favorite utopian vision in miniature , a world without them.

Of course, liberals envision a world without people like me, but you can’t always get what you want or, as Obama and our village idiot Dollar Bill like to point out, “elections have consequences”. And they do: the past election saw the Democrats evicted from power.

Remember: The people telling you a government shutdown [and sequestration – Ed] is a disaster are the same ones who told you 3 weeks ago that we had to invade Syria.

GOP “Anarchists” Now Talking About Reopening…National Parks? “In a Washington where 95 percent of Department of Education employees were sent home today because they are ‘non-essential,’ I’d think twice about simply moving to restore pre-shutdown funding to the government. It would be nice to dust off actual budget proposals and start talking about what the government should do and how much (or how much little) it should spend in pursuit of those goals.”

The concept of zero-based budgeting is not new; it just hasn’t been used in Washington before. Here’s our chance.