Long Island middle school bans tossing footballs, baseballs or any “hard objects” during recess, bans tag, cartwheels too. Seriously: between the indoctrination in the classroom and the mindless supervision outside, sending a student to public school is an act of child abuse.

Our school superintendent McKersie has written a letter to Greenwich Time acknowledging that his response to Board of Education member Peter Sherr’s questions was entirely wrong, as were his actions in passing his response along to third parties.

I’m still not thrilled by the guy, but as someone who has too often lashed out in anger myself, when the far wiser course of action would have been to do or say nothing, I can sympathize. It’s a decent, adult letter.

For those of you who rely on the main stream media for your news and thus haven’t heard of this, Fast and Furious was a gun-running operation conducted by Eric Holder that sent thousands of automatic weapons to Mexican drug cartels and resulted in the murder of several US DEA agents. Mr. Holder, who lied under oath to Congress about his role in the operation, still serves as the Attorney General of the United States.

The ACLU is raising a fuss.  Their usual allies on the left are, as in all things Obama, silent.

And Steve Archino, listing agent, is having another great year, as usual; that was also his listing on Taconic, reported as sold for $14 million.

50% of all disability claims bogus?

[T]he Federal Disability Insurance Program, … could become the first government benefits program to run out of money. When it began back in the 1950s it was envisioned as a small program to assist people who were unable to work because of illness or injury.

Today, it serves nearly 12 million people — up 20 percent in the last six years — and has a budget of $135 billion. That’s more than the government spent last year on the Department of Homeland Security, the Justice Department, and the Labor Department combined. It’s been called a “secret welfare system” with it’s own “disability industrial complex,” a system ravaged by waste and fraud. A lot of people want to know what’s going on. Especially Sen. Tom Coburn of Oklahoma.

Tom Coburn: Go read the statute. If there’s any job in the economy you can perform, you are not eligible for disability. That’s pretty clear. So, where’d all those disabled people come from?

The Social Security Administration, which runs the disability program says the explosive surge is due to aging baby boomers and the lingering effects of a bad economy. But Sen. Tom Coburn of Oklahoma, the ranking Republican on the Senate Subcommittee for Investigations — who’s also a physician — says it’s more complicated than that. Last year, his staff randomly selected hundreds of disability files and found that 25 percent of them should never have been approved — another 20 percent, he said, were highly questionable.

I think I’ll just refrain from giving an opinion on Riverside prices for a while because I’m obviously missing something.

If you believe tornadoes honor political boundaries, you can relax

According to this map issued by the National Weather Service, there’s a tornado watch for NYC and Westchester County but not Connecticut. That’s quite a relief, unless the guy drawing the map was sent home by the shutdown before he got around to coloring in Fairfield County.

This may come back to bite them

By taking the most aggressive stance of any agency to harass and punish US citizens for their Congress’s inability to reach a budget agreement, the National Parks Service looks increasingly like Obama’s attack- lap dog. I’d guess that of all our divisions of government, the Parks are, or were, the least controversial – who doesn’t like Smokey the Bear? Payback’s a bitch, though, and the next time these little jackboots send their own budget over to the Hill, I expect that whatever goodwill they’ve enjoyed up to now will have vanished.

Hope so. Elephants are supposed to have a long memory, no? 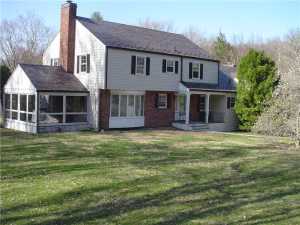 There are those who might think that there’s more to this home’s failure to sell than one thousand, five hundred dollars – three acres of land, with a dated house, is probably worth somewhere around a million – but the owner and her agent obviously disagree. I suspect that at least one of its problems is its description of the property as a Greenwich residence when in fact it is not; buyers can get cranky when they discover they’re being jerked around.

“Circular driveway w/belgian block entices you into this peaceful, serene and tranquil lake front setting home on 3+ acre in back country Greenwich.”

I mentioned here last week that 21 Winthrop, 0.75 acre, two building lots, asking $3.450 million, had gone to sealed bids. Today that’s confirmed. I won’t even pretend to understand how someone could pay this much or, it sounds like, even more.

Crazy market over here in Riverside.

Because, after all, she may want to post pictures of Bo in his helicopter.

Where is the left?

The Lefty “progressives” have no principles to guide them, only situational “ethics”. But anyone with an IQ only slightly higher than FWIW’s Dollar Bill should be able to see what Obama is doing to all citizens of the United States – unlike the IRS persecution of the hated Tea Bag party members, this is happening to all citizens, just as warned of here, repeatedly. Glenn Reynolds has several posts on this today.

JOHN ONDRASIK SHOVED OUT OF JEFFERSON MEMORIAL: I asked him “why do you have to put your hands on me and push me out when I’m leaving anyways”…he replied “it’s quicker this way”…

Look, we know the meme has been written within mainstream media since before the shutdown began. It’s the Republicans’ intransigence that has caused all this. There certainly will be plenty of time to debate the wisdom and efficacy of the strategy. But can we not just recognize what’s going on here? The President is a tyrant. That’s what you call people who act in a tyrannical manner.

MSM might continue to cover up the horrible optics of the childish and despotic lengths President Obama’s administration will go to make sure the effects of the shutdown are felt as painfully as possible to make a political point. But all of you who read this have a voice. You can help by multiplying John’s message by showing what’s really going on. Retweet it, if you’re on Twitter, post it, if you’re on Facebook, or if nothing else, tell others what this government is doing. The fight in Washington is more than just Obamacare. It always has been. It’s about what happens when a government gets too big and decides it doesn’t serve the people anymore.

And a reader provides these:

Elderly couple evicted from their paid for Nevada home because it sits on federal land – land which belongs to the American people not the Obama Administration.

NPS shuts down private inns on the Blue Ridge Parkway – inns which are maintained and operated with private monies.

Poster sighted at the White House

The government claims that its portal into ObamaKare will be up and running today and that this time it has it right. A man who describes himself as “very, very supportive of the Healthcare Act” but who also designs the software that keeps Netflix and other high-volume users up and running isn’t so sure:

Washington Post: Jyoti Bansal is the founder of AppDynamics, an application management company that, among other things “makes sure essential software applications of customers such as Netflix stay up and running.” I gave him a call to talk about some of the technological challenges that have plagued HealthCare.Gov during its first week online, what’s causing those problems, and what he would change if put in charge of the project.

JB: On day one, if you’re having high volume, you could add more servers. Hardware is the easy part. Let’s say you add servers, and hardware isn’t a problem but you still can’t keep up on scalability, then that’s indicative of something wrong in the software. It’s like you have four lanes in the highway converging into three lanes of a bottleneck. If your software isn’t designed to reach all the lanes, that will happen.

SK: The Obama administration has said that all these problems are happening because of overwhelming traffic. How good of an explanation is that?

JB: That seems like not a very good excuse to me. In sites like these there’s a very standard approach to capacity planning. You start with some basic math. Like, in this case, you look at all the federal states and how many uninsured people they have. Out of those you think, maybe 10 percent would log in in the first day. But you model for the worst case, and that’s how you come up with your peak of how many people could try to do the same thing at the same time.

Before you launch you run a lot of load testing with twice the load of the peak , so you can go through and remove glitches. I’m a very very big supporter of the health-care act, but I don’t buy the argument that the load was too unexpected.

If it takes the life of just one child …

Obama closes Amber Alert website “due to government shut down”. WWII Veterans, sightseers, children; next up? Look for a gun held to a puppy’s head.