Modern America and the lightbulb

It’s been my devout hope these past years that the arrival of the final ban on incandescent lights and ObamaCare will drive home to citizens the folly and oppressiveness of an all-powerful centralized government. Of course, recognizing that folly and overcoming the corporate/government combine are two separate things.

Here’s what happened to your lightbulbs yesterday.

Competitive markets with low costs of entry have a characteristic that consumers love and businesses lament: very low profit margins. GE, Philips and Sylvania dominated the U.S. market in incandescents, but they couldn’t convert that dominance into price hikes. Because of light bulb’s low material and manufacturing costs, any big climb in prices would have invited new competitors to undercut the giants — and that new competitor would probably have won a distribution deal with Wal-Mart.

So, simply the threat of competition kept profit margins low on the traditional light bulb — that’s the magic of capitalism. GE and Sylvania searched for higher profits by improving the bulb — think of the GE Soft White bulb. These companies, with their giant research budgets, made advances with halogen, LED and fluorescent technologies, and even high-efficiency incandescents. They sold these bulbs at a much higher prices — but they couldn’t get many customers to buy them for those high prices. That’s the hard part about capitalism — consumers, not manufacturers, get to demand what something is worth.

Capitalism ruining their party, the bulb-makers turned to government. Philips teamed up with NRDC. GE leaned on its huge lobbying army — the largest in the nation — and soon they were able to ban the low-profit-margin bulbs. . . .

Technologies often run the course from breakthrough innovation to obsolete. Think of the 8-track, the Model T or Kodachrome film. But the market didn’t kill the traditional light bulb. Government did it, at the request of big business.

Who says initiative is dead among our underclass?

BOSTON — A man charged with trying to bilk the Boston Marathon bombing victims’ fund out of more than $2 million has filed a federal lawsuit claiming state police violated his constitutional rights when they arrested him.

Branden Mattier, 23, alleges police misconduct and is seeking $100,000 in damages, according to the suit filed in U.S. District Court in Boston on Dec. 23 and reported Tuesday by the Boston Herald.

Mattier, of Boston, and his brother filed a claim with The One Fund using the name of a dead aunt, prosecutors said. They claimed she had lost both legs in the attack. Mattier was arrested July 2 when he allegedly accepted a fake check for almost $2.2 million from an undercover state trooper posing as a delivery driver.

His suit says state police never received permission from The One Fund to make a phony check in the organization’s name. Mattier named the state police, a trooper assigned to the state attorney general’s office and FedEx as defendants in the lawsuit.

Mr.  Mattier is representing himself in the lawsuit.

Could be a grain of truth in this story

Chinese businessman claims he’s interested in buying the NYT. If that happened the paper could at least drop the pretense that it’s not a commie rag, but don’t count on it quite yet – reports say that the  Sulzbergers are not bowled over.

Does this mean the cops should feed stool pigeons Rocky Mountain oysters? 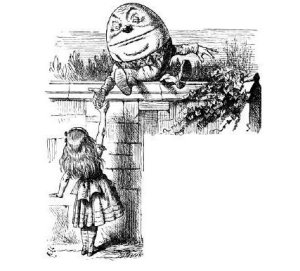 “When I use a word,” Humpty Dumpty said, in rather a scornful tone, “it means just what I choose it to mean—neither more nor less.”

White House now denies the administration set a goal of 7 million customers signed up for ObamaCare by March. And the Messiah never drew a “red line” in the sands of Syria. Peace is war, enemies are friends.

Just this past Tuesday, HHS secretary Sebelius claimed that “2.1 million Americans have enrolled in ObamaCare”,  while neglecting to mention that at least half that number has not paid their first premium and refusing to give an age breakdown of the happy new insured. As Glenn Reynolds points out, “if they numbers were good, they’d be telling us.”

The NYT is worried about those global warmists trapped in the ice, but not for the reason you might think

Andrew Revkin in a sober moment at the North Pole – “this is SERIOUS”, damn it!

It’s not their safety that has the Grey Lady’s knickers in a knot, but the fact that the incident is giving global warming a bad image. Times science editor Andrew Revkin frets:

Of course the evacuation of the trapped ship, which will require helicopters given the impassible nature of the thick sea ice in the area, is vital. But when you consider the cost and risk attending the operation, and the impact on other science, this raises questions about the advisability of this voyage in the first place.

If you follow the discussion around #SpiritOfMawson — the Twitter hashtag for the project — you’ll also note how this misadventure has energized climate change contrarians, offering a distraction from serious research on the impact of climate change on Antarctica.

The leaders of the current expedition are seasoned field scientists. But the bungled trip now threatens to tarnish the wider field of Antarctic science. Particularly vexing is what seems to be a devil-may-care attitude expressed by some of those on the trapped ship.

This was on display in a New Year’s Eve sing along posted on YouTube, but more so in a Christmas Day comment by the expedition’s marine ecologist Tracy Rogers, quoted by the BBC:

“It’s fantastic – I love it when the ice wins and we don’t,” said expedition marine ecologist Tracy Rogers. “It reminds you that as humans, we don’t control everything and that the natural world – it’s the winner here. We’ve got several penguins watching us, thinking ‘what the hell are you doing stuck in our ice?’. The sky is a beautiful grey – it looks like it wants to have a bit of a snow. It’s the perfect Christmas, really.”

Sing alongs? A devil-may-care attitude? In the Church of Holy Mother Gaia? Blasphemy!

To quote another old scolding nag, “we are not amused.”