Truth in advertising would suggest “The Forever Fund”, instead 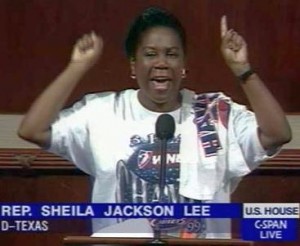 An I ain’t gonna work no more

I get it; Representative Jackson wants to erase the stigma from multi-generational welfare bums, and the period between coming off a man’s mamma’s Aid for Dependent Children to turning to Social Security at 62 is a long time, so clearly aid is required to bridge that transition, but non-Democrats might not understand what exactly the lazy loafers are transitioning to, so it’s probably better to get it right up front and be done with it.

Sheila Jackson is a drooling testimony against affirmative action, by the way, having graduated from both Yale and the University of Virginia School of Law, and is best known, perhaps, for asking whether the Mars Pathfinder had captured a picture of the American flag planted on that planet by Neil Armstrong.

Ms. Jackson sits on the Congressional Science Committee but her knowledge of world politics is just as extensive:

In July 2010 Jackson Lee said: “Today, we have two Vietnams, side by side, North and South, exchanging and working. We may not agree with all that North Vietnam is doing, but they are living in peace. I would look for a better human rights record for North Vietnam, but they are living side by side.” It was noted, but not by this Yale graduate, that Vietnam had not been split for four decades.

If Sears is just a real estate play, why should store losses matter? 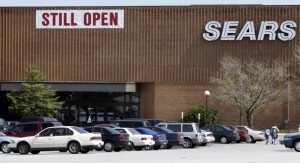 But not for long

Says here that Sears is crashing after hours because quarterly earnings came in at a loss of $2.01-$2.98 after analysts predicted earnings of $0.26, but why does Wall Street care? My limited understanding of this sorry corporation’s condition is that it’s been holding its share value because of the real estate it controlled, not the number of washing machines it’s selling. Wouldn’t today’s earnings report just hasten the day when that property value is realized?

I leave it to you finance guys to explain.

He’s got at least one believer

January 6: Former Canadian Defense minister Paul Hellyer claims there are aliens amongst us.

A domestic dispute that resulted from an argument about the existence of space aliens ended when Jennifer McCarthy of Santa Fe allegedly pulled a handgun from her genital area and pointed it at her boyfriend.

No word which of the two love birds sided with Mr. Hellyer.

Nothing much doing in the way of real estate transactions or even open houses, but that should all start up again next week. Here’s one sale, 3 acres at 9 Oakley Lane (off North Street), $2.5 million. Sold quickly. There’s a house on the site, but not for long.

Better to go to a gun show, but this is West Virginia