Hello, Seyed?… Alright, Mr. Khamenei, then, if you insist. Listen: got a question for you about those nukes of yours

Well no, Demitri, he hasn’t returned my call

Obama says he will stop spying on foreign leaders and “if I have a question, I’ll just call them.”

Yes, he really is that naive. Pray for the nation.

But is that necessarily a good thing? 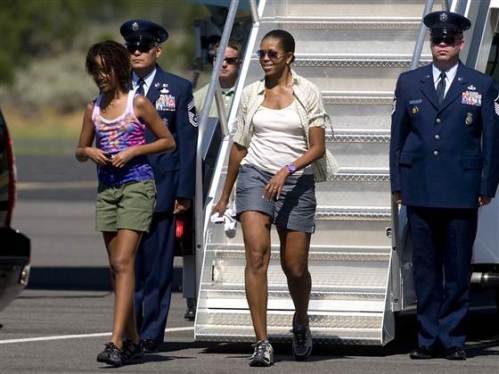 “In a bold style never before seen stepping down from Air Force One, …”the First Lady!”

It’ll be interesting to see if this works

Beleaguered Arizona Democrat Ann Kirkpatrick, with aid of a Democrat super pac, tries to have it both ways: attacks her boss (that would be Mr. Obama) for his “disastrous, inept” roll out of ObamaCare, while claiming credit for forcing insurance companies to accept applicants with preexisting conditions and stop dropping patients when their claims hit a cost ceiling.

Those are both popular features of ObamaCare, or were until folks discovered that they’d have to pay for them, so the bifurcation: blame Obama for the lousy start up, take credit for the as-yet-unproven “benefits”, seems like a sensible approach for a Democrat facing a Republican challenger next fall. We’re sure to see this strategy duplicated in other campaigns in the coming months and, given the gullibility of the American voter, it just may work – probably will. 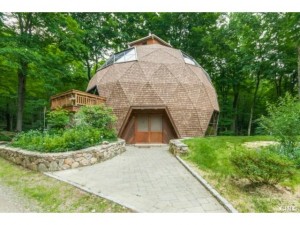 That’s how Stewart Brand introduced the follow-up edition of The Whole Earth Catalogue, summarizing the failed illusions of the hippie movement expressed so joyously in the late 60s’ versions. His point: get real, people, and face reality.

Many of his readers refused to do that and in fact persist in living in the original’s fantasy -Dollar Bill comes to mind, as does the entire green movement – and thanks to Cos Cobber, we can draw your attention to an opportunity to relive that experience in a dome in Wilton. Greenwich Time has the scoop:

Inspired by the geodesic dome homes of the great Buckminster Fuller, this northern Connecticut bubble laughs at your outmoded need for four walls in a roof. (“More like a network of interlocking triangles forming a sphere, amiright?” we imagine it jeering, forming a chorus with its bulbous brethren.) Built in 1974, when the back-to-the-land movement went hand-in-glove with unconventional formal strides, this three-bedroom abode also reps its era proudly throughout its roughly 3,600-square-foot interior, with groovy orange carpeting and strata of stonework, although the chipboard finish on some wall sections isn’t doing the place any favors.

Of course, the home has a little more relevance to local readers than it would on a national real estate blog. Back in May 2012, the home was the scene of a brutal beating and stabbing death of 73-year-old Edward Ramsey for which his son Aaron was later found not guilty by reason of insanity.

Hmm – seems to me that the aging tie-dyed set, the only market for a dome, would be put off by the whole murder-karma-aura thing. Maybe the land itself has some value, or the United Way could use it to host Crosby, Stills and Nash reunions.

Full Ravies listing here (UPDATE – now dropped – we get results!) , although it doesn’t mention the unfortunate demise of Mr. Ramsey..