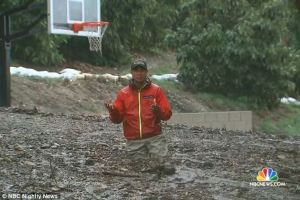 You can turn the channel or save this idiot’s life

A television reporter has had to be rescued by emergency crews in California after getting trapped by feet of mud that he purposefully waded into in order to film a live shot for NBC Nightly News.

Miguel Almaguer waded into the thigh-deep mud for a live shot that aired Friday night and promptly had to be pulled out by emergency responders when he was unable to get out.