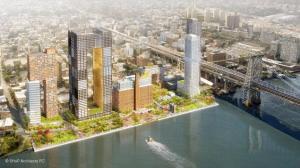 Mayor de Blasio’s ambitious housing plan is now towering over the city — and after the approval of a massive development in Brooklyn, some advocates and preservationists are cowering in its shadow.

Their concern is this: Will de Blasio’s promise to let developers build larger and taller in exchange for creating affordable housing overwhelm neighborhoods with hulking buildings that hurt the quality of life?

“Hopefully new affordable housing can be created without necessarily requiring a massive scale of construction to do so,” said Andrew Berman, executive director of the Greenwich Village Society for Historic Preservation.

This build-at-all-costs mentality even has some housing advocates worried.

“Density is great, but it means more than just tall buildings,” said Jerilyn Perine, of the Citizen’s Housing and Planning Commission. “They have to fit in with the urban fabric and address basic infrastructure, too.”

11 responses to “Gotta love it”