When the government is all-powerful, this happens 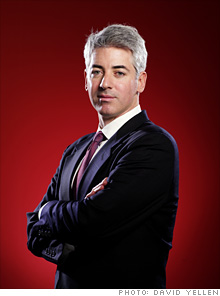 The smug look of a man with politicians in his pocket

A hedge-fund investor bet a billion dollars that a health company would crash on Wall Street, and then hired a crew of Democratic lobbyists to kneecap the target company.

The lobbyists for the investor, William Ackman, successfully persuaded two Democratic legislators and numerous self-described Hispanic and African-American civil-rights groups to prod regulators into investigating Herbalife Ltd., according to a lengthy article published in the New York Times.

To defend itself, Herbalife hired its own gang of Democratic lobbyists to sway congressional staff and the media, and offered $30,000 to a Hispanic civil-rights group to quit Ackman’s crew.

Ackman’s team has included two Democratic legislators, California Rep. Linda Sanchez and Massachusetts Sen. Edward J. Markey. They helped Ackman after he hired two of their former staffers to lobby for his claim.

Ackman also added people who had worked in the White House for President Barack Obama or President Bill Clinton. They included Jim Papa, at the Global Strategy Group, and Minyon Moore, who worked for Obama.

He hired the Dewey Square Group in D.C., to create a fake grass-roots protest movement.

He also hired state lobbyists to create protests in Hispanic and African-American communities in Nevada and California.

Two things: (1) I share Ackman’s suspicions about Herbalife, so I initially cheered when he denounced the company as a fraud; and (2) there’s no doubt that, were Republicans in power, Ackmann would have found and hired Republicans as his flacks. As I see it, this isn’t about the merits of Herbalife or the respective virtues of the Republican and Democratic parties. It’s about what happens when the government grows powerful enough to destroy companies – those who control that power or can influence where it is focused, get rich.

UPDATE: The NYT article, linked to above, is very thorough and worth reading if you want to see how this process works. If only the Times’ editorial board would read what their business reporters write.

34 responses to “When the government is all-powerful, this happens”