And we’re doing this to ourselves 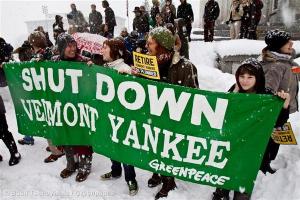 In a land that could be awash in abundant energy, this:

As temperatures plunged to 16 below zero in Chicago in early January and set record lows across the eastern U.S., electrical system managers implored the public to turn off stoves, dryers and even lights or risk blackouts.

A fifth of all power-generating capacity in a grid serving 60 million people went suddenly offline, as coal piles froze, sensitive electrical equipment went haywire and utility operators had trouble finding enough natural gas to keep power plants running. The wholesale price of electricity skyrocketed to nearly $2 per kilowatt hour, more than 40 times the normal rate. The price hikes cascaded quickly down to consumers. Robert Thompson, who lives in the suburbs of Allentown, Pa., got a $1,250 bill for January.

The electrical system’s duress was a direct result of the polar vortex, the cold air mass that settled over the nation. But it exposed a more fundamental problem. There is a growing fragility in the U.S. electricity system, experts warn, the result of the shutdown of coal-fired plants, reductions in nuclear power, a shift to more expensive renewable energy and natural gas pipeline constraints. The result is likely to be future price shocks. And they may not be temporary.

One recent study predicts the cost of electricity in California alone could jump 47% over the next 16 years, in part because of the state’s shift toward more expensive renewable energy.

“We are now in an era of rising electricity prices,” said Philip Moeller, a member of the Federal Energy Regulatory Commission, who said the steady reduction in generating capacity across the nation means that prices are headed up. “If you take enough supply out of the system, the price is going to increase.”

In fact, the price of electricity has already been rising over the last decade, jumping by double digits in many states, even after accounting for inflation. In California, residential electricity prices shot up 30% between 2006 and 2012, adjusted for inflation, according to Energy Department figures. Experts in the state’s energy markets project the price could jump an additional 47% over the next 15 years.

The problems confronting the electricity system are the result of a wide range of forces: new federal regulations on toxic emissions, rules on greenhouse gases, state mandates for renewable power, technical problems at nuclear power plants and unpredictable price trends for natural gas. Even cheap hydro power is declining in some areas, particularly California, owing to the long-lasting drought.

“Everywhere you turn, there are proposals and regulations to make prices go higher,” said Daniel Kish, senior vice president at the Institute for Energy Research. “The trend line is up, up, up. We are going into uncharted territory.”

New emissions rules on mercury, acid gases and other toxics by the Environmental Protection Agency are expected to result in significant losses of the nation’s coal-generated power, historically the largest and cheapest source of electricity. Already, two dozen coal generating units across the country are scheduled for decommissioning. When the regulations go into effect next year, 60 gigawatts of capacity — equivalent to the output of 60 nuclear reactors — will be taken out of the system, according to Energy Department estimates.

Moeller, the federal energy commissioner, warns that these rapid changes are eroding the system’s ability to handle unexpected upsets, such as the polar vortex, and could result in brownouts or even blackouts in some regions as early as next year. He doesn’t argue against the changes, but believes they are being phased in too quickly.

At the same time, 30 states have mandates for renewable energy that will require the use of more expensive wind and solar energy. Since those sources depend on the weather, they require backup generation — a hidden factor that can add significantly to the overall cost to consumers.

Nowhere are the forces more in play than in California, which has the nation’s most aggressive mandate for renewable power. Major utilities must obtain 33% of their power from renewable sources by 2020, not counting low-cost hydropower from giant dams in the Sierra Nevada mountains.

But San Francisco-based Energy + Environmental Economics, a respected consultant, has projected that the cost of California’s electricity is likely to increase 47% over the next 16 years, adjusted for inflation, in part because of the renewable power mandate and heavy investments in transmission lines.

The mandate is just one market force. California has all but phased out coal-generated electricity. The state lost the output of San Onofre’s two nuclear reactors and is facing the shutdown of 19 gas-fired power plants along the coast because of new state-imposed ocean water rules by 2020.

“Our rates are increasing because of all of these changes that are occurring and will continue to occur as far out as we can see,” said Phil Leiber, chief financial officer of the Los Angeles Department of Water and Power. “Renewable power has merit, but unfortunately it is more costly and is one of the drivers of our rates.”

The push to wean California off fossil fuels for electricity could cause a consumer backlash as the price for doing so becomes increasingly apparent, warns Alex Leupp, an executive with the Northern California Power Agency, a nonprofit that generates low-cost power for 15 agencies across the state. The nonprofit was formed decades ago during a rebellion against the PUC and the high prices that resulted from its regulations.

“If power gets too expensive, there will be a revolt,” Leupp said. “If the state pushes too fast on renewables before the technology is viable, it could set back the environmental goals we all believe in at the end of the day.”

We can have cheap energy, jobs and posterity, or we can have a Green-Mandated new world of shortage and want. Liberals have voted for the latter.

7 responses to “And we’re doing this to ourselves”