Un petit-déjeuner will be served on white tablecloths, just in case need should arise

I, Pepe le Pew shall be your waiter this morning

Francophiles and toadies (Peter Tesei, for one) will celebrate Bastille Day in Greenwich this Monday, to honor the barbarians who founded the Reign of Terror.  After a lusty rendition of the communist anthem, celebrants will repair to Versailles on the avenue to enjoy some whine and cheese.

There’s just no stopping it, with the present cast of characters in office

Byram pool project resurfaces and is headed for our wallets.

First Selectman Peter Tesei said he expected the municipal improvement vote to be unanimous in favor of the project.

“It accommodates the needs of a very diverse population that ranges from seniors to young children,” he said. “I think it will be greatly beneficial to the residents of Greenwich and certainly enhance the overall park experience.”

Headline of the day

Actually, I’d gladly be the second, but it’s a funny line.

O’Bumpkus sat down with Governor Perry to discuss the administration’s amnesty plan and one side of the table thought the whole fiasco fabulously entertaining. I wonder whether the country will get the joke? 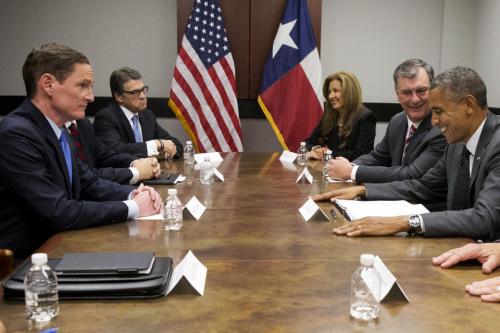 Uh oh, the blacks are figuring it out

Reader Publius sends this along: If 30 million new unskilled laborers come into the country to compete for jobs, how does that help African-Americans? So far, the Democrats don’t care if they’re offending their base because they figured out long ago they’ve got them locked in, regardless of the disastrous effects “progressive” policies have done to them. That might change. UPDATE: Black American in gang-infested Baltimore asks, “where can I get asylum?”

“I’m living a nightmare. My whole neighborhood is so violent. There’s so much crime,” she said. “I have gangs everywhere here in Baltimore! I can’t let my daughter ride her bicycle outside – I can’t do anything … ! I’m trapped here.”

“Well, what about my neighborhood? You don’t have to do it in Beverly Hills, but in the inner cities where we are suffering,” she said. “My children cannot play outside. I cannot take my trash out without locking the door – it’s awful. Who is going to give us anything? Where can I get asylum? Where can I get refugee status? I don’t know what I can do. Nobody cares what happens to my children.”

The unemployment rate for black Americans is nearly double that of whites, and the amnesty legislation favored by Obama and the bipartisan permanent political class would hurt black Americans the most by flooding the labor market with more cheap labor. That is why Civil Rights Commissioner Peter Kirsanow wrote the Congressional Black Caucus to urge them to vote against amnesty bills that would make it more difficult for black Americans to enter the middle class.

“Giving amnesty to illegal immigrants would only exacerbate this problem facing low-skilled men, who are disproportionately African-American,” Kirsanow concluded. 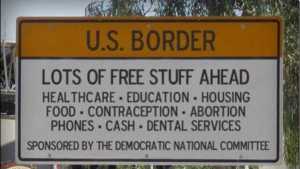 And the lawlessness continues

No need to print it in Spanish

Obama is now permitting illegal aliens to board commercial carriers and fly across the country, with no identification whatsoever. Trying doing that with your family on your next trip to Disney World.

“This is not the CBP [Customs and Border Protection] or another federal agency renting or leasing an aircraft, these are the same planes that the American public uses for domestic travel,” said Garza. “This just adds insult to injury. Not only are we releasing unknown illegal aliens onto American streets, but we are allowing them to travel commercially using paperwork that could easily be reproduced or manipulated on any home computer. The Notice to Appear form has no photo, anyone can make one and manipulate one. They do not have any security features, no watermark, nothing. They are simply printed on standard copy paper based on the information the illegal alien says is the truth.”

Spokesman Garza continued, “We do not know who these people are, we often have to solely rely on who they say they are, where they say they came from, and the history they say they have. We know nothing about most of them, ICE releases them into the American public, and now they are boarding aircraft at will with a simple paper document that anyone can easily alter or reproduce themselves.”

“Attention, terrorists: you are now free to move about the country.”

Geeze, the only spam mail I get is from Nigerian bankers’ widows

The world’s most exclusive private millionaire’s club is suing a local brokerage for allegedly obtaining its notoriously top secret list of members and using it to try to sell a home.

Tiger 21, a powerful social networking group comprised of the world’s most wealthy entrepreneurs, claims Halstead Property broker Dorothy Somekh illegally infiltrated the organization in an effort to find a buyer for a $45 million Upper East Side townhouse once home to screen star-turned-princess Grace Kelly and singer Harry Belafonte.

Somekh’s “pure greed” led her to allegedly pressure an employee of Tiger 21 to supply a confidential list of the group’s ultra-rich members and then spam them with advertisements for the property, for which she had the exclusive listing.

A sale of the property would have netted her a whopping $2.7 million commission.

Hey, it says here she went to Woodstock back in ’69. Maybe she lost her manners there, and never got ’em back?

Al Gore: “I now admit I was wrong about global warming, and I apologize for any inconvenience I may have caused”

Polar vortex to slam into US next week, dropping summer temperatures 30º. If earthquakes, floods, fires and drought constitute “proof” of global warming, then surely a cold snap in July offers the counter-argument.

189 Riversville Road sold at foreclosure auction back in 2012 for $960,000, and, refurbished and spruced up, now reports a pending sale – asking price $1.189 million. Looks like a sweet deal for the buyer, with two acres and a charming house.

Zillow has the old, pre-foreclosure photos; I’m adding a few of the new ones. 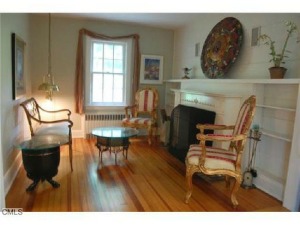 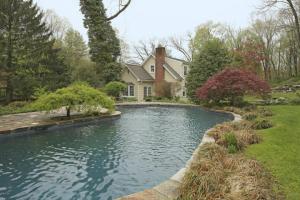 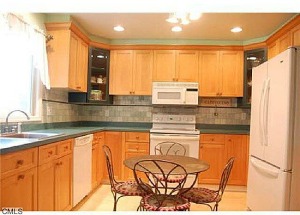 Comments Off on Post-foreclosure sale

Obama to illegal aliens: “I’m on your side, man!”

POTUS “not interested in a photo-op at the border, but at a barbecue joint? Of me cutting the line because I’m important? Like white on rice, babe.”

Which means, presumably, that he is against the citizens of this country.  The man is appointed by the Constitution to be our Commander in Chief. Would that he’d abdicate office completely, rather than just his constitutional duties. Peggy Noonan asks, “is a nation without borders a nation?” and implies that the answer is, “not for long”. She also says this:

There is every sign [Obama] let the crisis on the border build to put heat on Republicans and make them pass his idea of good immigration reform. It would be “comprehensive,” meaning huge, impenetrable and probably full of mischief. His base wants it. It would no doubt benefit the Democratic Party in the long term.

I’m hopeful that Obama’s tactic here will backfire. I was reflecting this morning that he’s killed immigration reform, not hastened it, because no American, witnessing what’s going on at our southern border and the Democrat’s non-response, will trust anything they say on the subject, for a long time. We’ll see.

L’Oreal fires Belgian girl/model because of outrage caused by her posting a shot of her posing next to an animal she shot and saying, “ready to hunt Americans”. As you might guess (I did), the outrage came from animal lovers – no one seems the least concerned with her hatred towards us.

We’d better maintain our armed forces because we sure as hell can’t expect anyone to come to our aid. On the other hand, we could, and probably should, significantly cut any expenses incurred for protecting Europeans from themselves.

749 Lake, from $10.5 million to $9.250. It’s a superbly built, beautiful home by Kaali-Nagy, but when I toured it on its first broker open house, many agents struggled to discern the difference between it and the other Kaali-Nagy house next door at 751, also 10,000 sq. ft., that had just sold for $7.850. Apparently, buyers are having the same difficulty.

And another er, “eclectic” home, but at least this one’s in Havemeyer 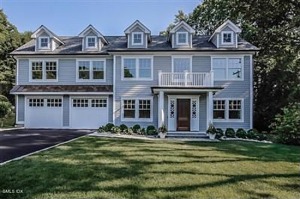 4 Robin Place, a flipsidoodle project asking $2.295 million, is under contract. 1955 home that was almost entirely replaced (a zoning trick? Don’t know), the listing claims 5,000 sq.ft., the applicable FAR allows 4, so look for the missing space below ground.

FAR house has a deal

136 Lockwood Road, $2.750 million, reports a pending sale. Not, to my eye, one of our more attractive homes, but it’s a typical example of a 2004 house built in accordance with the dictates of the P&Z’s Floor Area Ratio rules. Notice the bump-out boxes in the front – they don’t reach the ground, hence they don’t count against FAR. See the flat roof behind the dormers? Another FAR result.

Blame for this mess can’t be entirely laid on the shoulders of Diane Fox and her staff, because an architect must have been involved, and only he, or she, could have chosen the hodgepodge of siding materials and the phony Romeo and Juliette balcony above the stoop. Still, we demand this sort of structure, and now we all have to live with it. 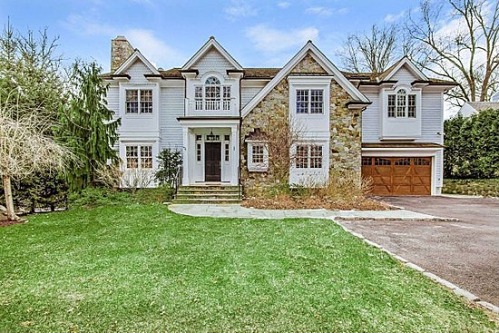 136 Lockwood Road, as designed by the Greenwich Planning & Zoning Commission

The problem with public housing is that the residents are not the owners.  The people who live in the house did not earn the house, but were merely loaned the property by the actual owners, the taxpayers.  Because of this, the residents do not have the “pride of ownership.”  That comes with the hard work necessary to become owners. In fact, quite the opposite happens. The residents resent their benefactors, because the very house is a constant reminder that they themselves have not earned the right to live in the house.  They neither appreciate the value of the property nor understand the need to maintain or respect it in any way.  The result is the same, whether one is talking about either a studio apartment or a magnificent mansion full of priceless antiques.  If the people who live there do not feel they’ve earned the privilege of occupancy, they will make this obvious through their actions.

Note the common theme of the following photographs…..

The desk, built from timbers of the HMS Resolute and a gift from
Queen Victoria to President Rutherford B. Hayes,
is considered a national treasure and icon of the presidency. 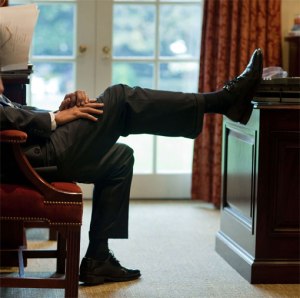 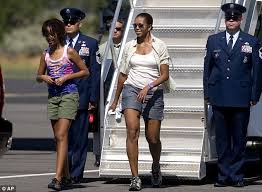 News you can use

Daily Caller: How to modify your (diesel) pickup to roll coal.

The latest craze among pickup drivers is to “roll coal” – smother in black, sooty clouds of exhaust – on Priuses and other weenie cars. The Daily Caller provides instructions on how to do it. The process is way too complicated for this simpleton (and besides, I don’t own a diesel) but it’s a tribute to American knowhow that so many in our heartland have figured it out.

One Facebook commenter who misunderstood Branscomb’s humour was Penelope Rayzor Bachand. She labelled Spielberg an ‘inhumane prick and ‘animal killer.’

‘Steven Spielberg, I’m disappointed in you. I’m not watching any of your movies again ANIMAL KILLER,’ she ended her impassioned rant.

Penelope and her crowd had much more to say, all harsh.