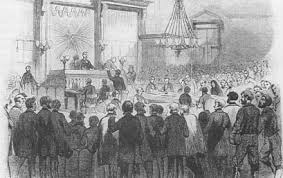 If there ain’t no seat, you must defeat!

Murder conviction tossed out because defendant’s mommy couldn’t find a seat in the crowded courtroom during jury selection.

The 23-year-old Brooklyn man was tried, convicted and — after the jury found he shot a rival dead at a dice game — sent to prison for 15 years to life. But the state’s highest court overturned the guilty verdict — all because Floyd’s mother couldn’t find a seat in the courtroom during jury selection.

A juror who voted to convict Floyd was shocked to learn of the stunning reversal.

“On a technicality like there was no room in the courtroom! That’s something new for me. I don’t think that’s right,” said the woman, who didn’t want her name used.

I used to pride myself on taking novel approaches to legal cases but I’ll admit, this argument would never have occurred to me.

2 responses to “The Genius of Anglo Saxon Jurisprudence, Chapter II”